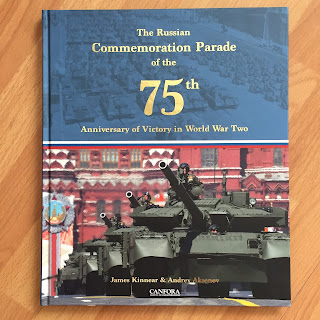 With the recent completion of James Kinnear´s Soviet and Russian military vehicle trilogy one might think that there would be no reason to so soon produce another parade book. However, last year´s (2020) 75thanniversary parade was something special and practically demanded a special book.

Kinnear´s three previous parade books are great for WWII and classic Cold War military vehicle buffs but there are 20 weapons systems missing in those books, weapons that made their parade debut only during the 2020 parade. Bearing in mind the very high Russian regard for anniversaries, especially when something happened 50, 75 and 100 years ago, the parade decision-makers chose to make the 75thanniversary parade a bit surprising. Thus some vehicles that made their parade debut last year even had not yet entered service with regular units.

Fans of fully restored T-34s and SU-100s (where most of them were found surprised me a lot) will appreciate the first pages of The Russian Commemoration Parade of the 75th Anniversary of Victory in World War Two, but then this large format book switches to contemporary weapons systems. It does so by showing them in big and excellent colour photographs that should please not least scale modelers.

The text about each weapons system matches the high quality of the illustrations and I found the following sections to be of particular interest: the K-4386 “Taifun-VDV” armoured car specially made for the Russian airborne troops; the 2S38 “Derevatsiya-PVO” air defence vehicle and the TOS-2 “Tosochka” thermobaric MRS vehicle.

For readers into luxury cars the section about the “Aurus-412314” parade limousine will be a sure favourite. The Aurus V-8 turbo engine was developed in collaboration with Porsche. Speaking of which there is a neat photo in the “then and now” chapter of two Tigers, one being a King Tiger, on display in Gorky Park in 1945.

Authors James Kinnear and Andrey Aksenov have with the help of their Swedish publisher Canfora produced a highly informative and visually terrific tankspotting guide.

created by Lars Gyllenhaal at 16:18