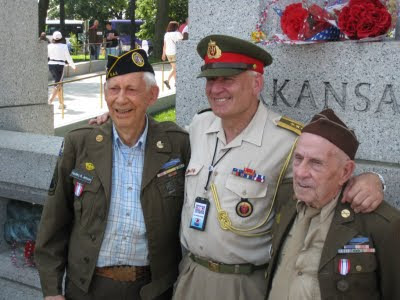 Hat tip to Bill Hoffland!
created by Lars Gyllenhaal at 18:57 No comments:

If you feel like following a Swedish archeological dig almost live, then this Swedish blog in English is for you. They are finding some rather interesting stuff from the Viking age and later.
created by Lars Gyllenhaal at 13:57 No comments:

Earlier today I learnt that my best friend in Russia, Roman Kravchenko-Berezhnoy, died the 20th of May. I honestly believe I somehow sensed this. For some weeks now I have felt uneasy for long periods, which I very seldom do.

The book project I have been a part of that I am most proud of was not about one of my own books, but Roman 's book: Victims, Victors: From Nazi Occupation to the Conquest of Germany as Seen by a Red Army Soldier. I was one of its editors.

The main part of the book is Roman's secret wartime diary that he wrote as a teenager in Nazi-occupied Ukraine. At the time his dream was "to survive until our guys got back, become a soldier myself, get a submachine gun, and head westward with them". But what really sets this book apart is that Roman is a very odd volunteer for the Red Army, as he has been raised in Poland, in a home very much part of a Russia that ceased to exist in 1917.

Although Roman after Hitler's 1941 attack against the Soviet Union dearly wants the Red Army to win, his family is not at all Soviet or Communist, it is a Russian family that has lived in a Russian community within a Ukrainian part of Poland until the advent of WWII. 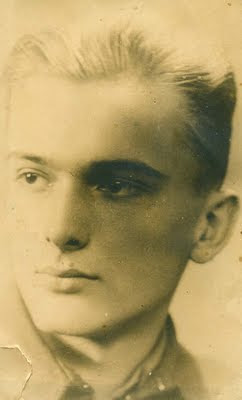 Roman in 1942, while writing his occupation diaries.

Thus, getting to know Roman was getting to know not only a very warm, wise and remarkable gentleman, it was also a fantastic opportunity to get to know Russia before 1917 in the form of a living human being. It is still just as mind-boggling to me as ever, no - even more now, when I think about it. 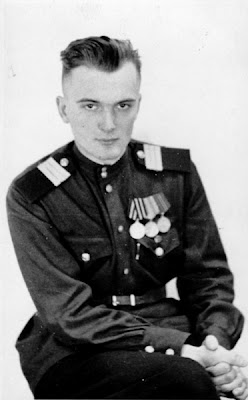 My friend after having become a submachinegunner and then frontline military interpreter. Here he holds the rank of a sergeant in the Red Army.

Well, as you have already guessed, Roman could realize his dream and become a Red Army solider, in 1944. Thus a part of the book constitutes his candid memories of being a teenage soldier that in a matter of months becomes a seasoned veteran and also gets greater responsibilities when his language skills are discovered. He is then transferred to a reconnaissance detachment.

He fights in Latvia, Poland, and Germany up to the seizure of Berlin. In occupied Germany he serves as a military interpreter for some five years, including for an Inter-Allied group searching for remains of Allied aviators.

Because of the nature of the Stalinist system Roman was then "rewarded" for his long service abroad and contacts with westerners with banishment to a construction battalion in the Motherland. 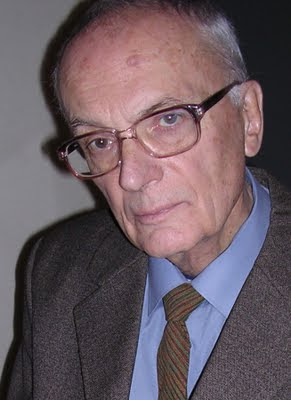 Roman Kravchenko-Berezhnoy (1926-2011). Teenage writer and soldier and later NCO, scientist and linguist. But above all: a brave, honest man and gentleman.

I was very glad that Roman got to read several wonderful reviews about his book, that in the Russian language was virtually unknown until the advent of the English translation by Marina Guba in 2007, made possible by the small quality publisher Aberjona Press of Bedford, Pennsylvania. For example, Walter S. Dunn wrote in Journal of Military History about it: "A remarkable document, casting light on events little understood. . . . Required reading for students of World War II and modern Russian history."

Still, I must say I am also somewhat disappointed that this moving and "truly unique" (quote from David M. Glantz) book has not yet been translated into my own language, Swedish, although part of the book takes place in Sweden. Amazingly, the author again became a "frontline" interpreter in 1990 while on a hijacked plane that was landed in Sweden. The book also should have a sizeable audience in German-speaking countries and in Poland, where much of the book takes place. I also strongly believe that it could be made into a movie that actually could promote understanding for the Eastern European WWII experience.

To somewhat understand Russia and other states once part of the "Eastern bloc", studying WWII is simply essential. I also believe that especially the Red Army has long been a mystery to westerners for the lack of i.a. translated auto-biographies. Therefore I warmly recommend to those who have not read Victims, Victors to check it out. The book is available from many internet book stores.
created by Lars Gyllenhaal at 20:26 No comments:

I had read about a bomb sight being thrown out over Lapland before but only now am grasping the whole story of Commander Peter Savage in Lapland, thanks to this obituary.

Hat tip to Peter Hore and Jan Erik Oja!
created by Lars Gyllenhaal at 09:09 No comments: 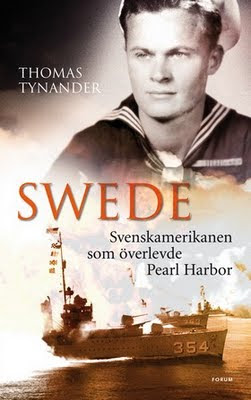 I was given a sneek peak and can testify that Swede will be appreciated by many, both WWII buffs and all Swedes interested in their American family branch(es). Hopefully, some US publisher will also want to publish Swede.
created by Lars Gyllenhaal at 21:59 1 comment: