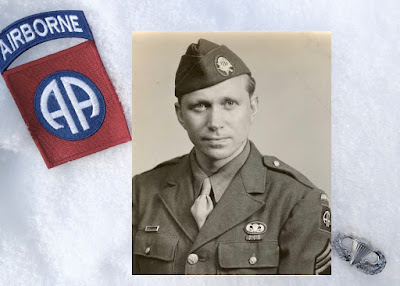 Gösta Wollin jumped over Normandy on D-Day without any jump training.

The release of the ballad "Normandie 13" about paratrooper Gösta Wollin is the most pleasant news I came across in my field of work during 2018. Let me explain why and also tell you about some of my other 2018 highlights.

Thanks to help from friends all over Scandinavia and in the US it was my privilege to this fall present new and, I believe, surprising figures regarding how many Swedish citizens donned US Army uniforms in 1941-45. Well, they were over 1,500 persons and there were many more who had been born in Sweden but had changed their citizenship. However, for historical research to become common knowledge, our screen-focused society needs more than books. Especially non-fiction is only read by a rather small minority of the population. The stories of the Swedes who fought on the battlefields against Hitler´s forces thus have to be told in different kinds of media to make a real impression. I had hoped for articles, TV documentaries and movies. Several articles have indeed appeared about them during 2018 and I believe we will eventually see also TV and film productions. What I had not at all expected was Stefan Andersson´s new record "Flygblad över Berlin" full of Swedish WWII history including "Normandie 13", a simply great song about 82nd Airborne paratrooper Gösta Wollin´s jump over Normandy. I believe that Wollin, whom I was in touch with several times and is featured in my latest book, would also have been pleasantly surprised by the song, had he lived to this year. Yes, you can listen to it right now on Spotify.

Not many days ago I was again baffled, when I called Viking Battalion veteran Sigvard Johnson and learnt that at the time of joining the US Army he had been not only a citizen of Finland but also of Sweden. I had taken for granted that by 2018 all Swedish citizens who had joined up were deceased. Well, I am glad I was wrong and if you can read Swedish (or can stand computer translations) I wrote this blog post about Johnson.

What about my favourite book this year? Well, limiting myself to history books I would say the book that left the strongest impression on me is The Gestapo´s Most Improbable Hostage by Squadron Leader Hugh Mallory Falconer. An amazing story of survival. But as I have already reviewed it I will not discuss it more now.

As you have already surmised I am pretty interested in Swedish-American history and it was therefore a nice treat for me to this year see one of the most special Swedish Americans ever on the big screen, I am talking about Buzz Aldrin, the second man on the moon, portrayed by Corey Stoll in "First Man". But, let us not here talk that much about Aldrin´s Swedish roots in the province of Värmland, or the fact that there are still a dozen Swedish Hasselblad cameras resting on the surface of the Moon... This is perhaps also not the place to point out that the filmmakers somehow missed that the first liquid ever poured on the Moon, by Aldrin, was wine - because he chose to take communion there. What matters most about "First Man" is that it is such a stunning movie in just about every respect. I am positive that you do not have to be a history nerd to appreciate it. If you have not yet seen it, make sure you do in 2019 - year of the the 50th anniversary of Buzz Aldrin´s walk on the Moon and 60th anniversary of the first human-made object to reach the surface of the Moon, the Soviet Luna 2. By the way, dear reader, I wish you a happy, healthy & peaceful 2019.
created by Lars Gyllenhaal at 22:19