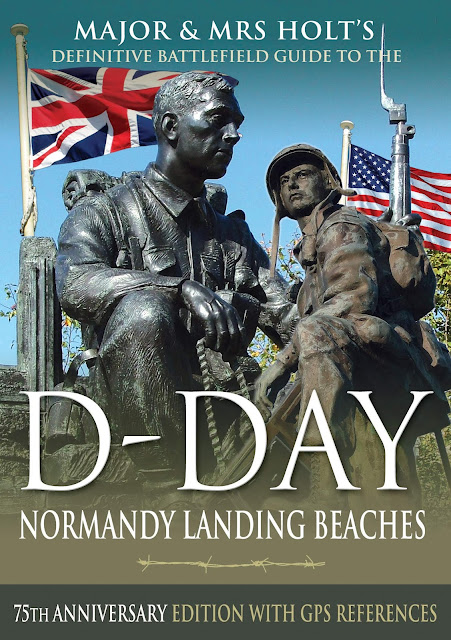 Superb for those of you who have been to Normandy but want to discover more.

Recently I reviewed Visiting the Normandy Invasion Beaches and Battlefields, a terrific book for first-time visitors to Normandy and those planning to lead school groups and similar groups. Now I will review a Normandy guide so comprehensive that it could also be considered a battlefield encyclopedia.

This book, Major & Mrs Holt´s Definitive Battlefield Guide to the D-Day Normandy Landing Beaches (75th Anniversary edition) by Tonie and Valmai Holt, is an impressive mix of good maps, photos and information, the result of decades of Normandy experience and countless meetings with veterans. Aside from many colour maps inside the book you also get a separate map which in itself will probably be very helpful, not least while you are in the area. Simply put, I have never seen a better battlefield tour map before.

Major & Mrs Holt´s new guide can be used not only to plan a trip to battlegrounds or museums of special interest, it is a tool for historians, serving officers, history buffs and wargamers. Even if you have been to Normandy a couple of times I bet you will find several new and highly interesting places thanks to this guide. I did. Also, you will probably find the purely historical information in the book very readable, motivating, and sometimes also very moving.

Nordic readers will be pleased to know that Major & Mrs Holt have not missed the Norwegian and Danish memorials in Normandy and thanks to the maps and photos you will be able to locate them. So far there is no memorial to the Swedes who were also a part of the Normandy landings (mostly at sea but also on the ground and in the air), but there is at least a Bofors anti-aircraft gun in the Bayeux Museum (there is a photo of it in the guide), one of hundreds of Bofors guns used in Normandy.

Major & Mrs Holt´s guide also cover where to stay and eat and special tips for those wishing to tour Normandy by bicycle. The book is 350 pages long but still quite handy (not that large), and filled with good illustrations, mainly in colour.

created by Lars Gyllenhaal at 17:53