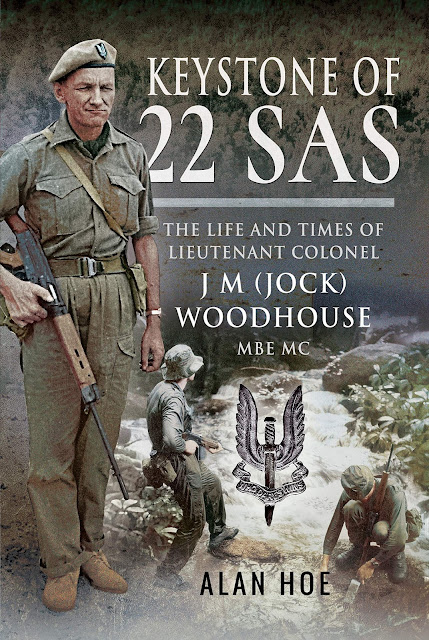 Without him there would today probably be no 22nd Special Air Service Regiment.

Quite a few readers of this blog may have read several books about the WWII Special Air Service and also the SAS during recent years. But what about the first postwar decades of the SAS? Here is a book that both covers WWII experiences and some of the more interesting post-1945 SAS episodes until the 1970s. And, of course, there are some Nordic connections.

As some readers may have noticed, I have a special interest in SAS history. This should become more apparent here, as I am planning to blog more about the SAS. Keystone of 22 SAS is, simply put, a fine account both of the life, mostly in the SAS, and times of Lieutenant Colonel John Woodhouse MBE MC. He first experienced combat in a conventional British Army unit in North Africa and there, strangely enough, is the first Nordic connection in the book. For more than twenty years I have been hiking on Arctic WWII battlefields and the type of tin cans that I have most often encountered in German positions are cans that once contained Norwegian fish. Therefore I can recall images from my memory when the book´s author, Alan Hoe (himself an SAS veteran), writes about Woodhouse often eating captured (from the Germans) Norwegian sardines in North Africa.

Keystone of 22 SAS quite often contains Woodhouse´s own words and here are some sentences from his diary in 1944 to give you an idea of his wartime reflections:

"The German soldiers had an unshakable belief in their superiority over all other nations and armies. They had been led to believe that war was glorious and Hitler [...] was invincible. The Wehrmacht was very well led, better equipped and by 1943 more battle experienced than we were. [...] I was often fearful but it always mattered greatly to me that I should be well regarded and respected by the soldiers I commanded. This helped in overcoming fear."

It was in the ruins of the Third Reich that Woodhouse entered a door that eventually led to the SAS. By exaggerating his contacts with Soviet soldiers while he was a PoW, he managed to get a place in a Russian language course. On the successful completion of the course he was posted to Germany where he joined the Control Commission to act as interpreter between Soviet and British military groups. A short time later he was switched to army intelligence. He then exeperienced some memorable encounters both with Soviets, including an early defector, and Germans like Hanna Reitsch, "[...] the only German I met who had the courage still to proclaim loyalty to the Nazis".

In 1950 he reacted positively to an invitation to join the Malayan Scouts and thus fight in the deep jungles of Malaya. He volunteered not least because he was keen to serve under the legendary Mike Calvert, famous for having commanded a Chindit Brigade in Burma. Woodhouse sensed that Calvert was a great source of "original ideas and concepts". Woodhouse became both nervous and "a bit resentful" when Calvert made him Unit Intelligence Officer. But then he meets a very unlikely character in the jungle, "Yorkie" Bjorkman:

"With a good intelligence network the battle is half won. Yes. You can learn a lot from Yorkie. He´s a man with personality, guts and imagination. He´s got thirty Malay police there and he controls the jungle for miles around - controls the jungle."

Bjorkman was awarded both a Distinguished Conduct Medal, the oldest British award for gallantry, and a Military Medal, for bravery. The encounter in the jungle with a man obviously of Nordic extraction is only one of many surprises in Keystone of 22 SAS. The SAS in Cold War Denmark is also part of the book, but one wishes there had been more details in that part.

Woodhouse´s fascinating career did not end at all with his formal retirement in 1964. The year after he was asked by SAS founder David Stirling to lead a team of three men to Yemen and in cooperation with Royalist forces attack an Egyptian airfield. These experiences alone could be made into a good movie.

John Woodhouse passed away in 2008. Now it is time for you to read about his rich life in Keystone of 22 SAS.
created by Lars Gyllenhaal at 21:14