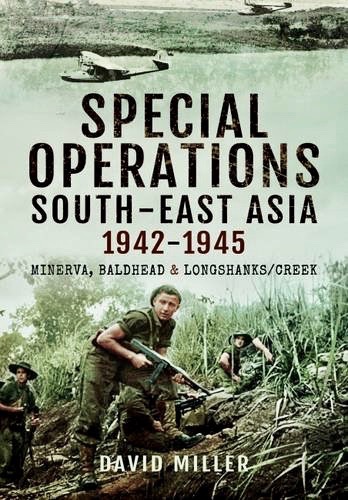 220 pages of amazing special operations in some truly exotic places.

When one hears "special operations during WWII" few will think of other continents than Europe and Africa. But special ops were of course also one method of fighting in Asia. David Miller´s book focuses on three special operations in Asia and especially one of them will surprise just about everyone - as the target was not Japanese but German. There is a Swedish connection, too.

German U-boat successes against Allied merchant ships in the Indian Ocean in 1942-43 became a real problem for the Allies. In fact, German naval forces were active in several parts of Asia, and more active than I had imagined. David Miller´s book has been a real eye-opener for me regarding this aspect of German operations. All three ops featured in his book Special Operations South-East Asia 1942-1945 are amazing to learn about, but the struggle against Japanese forces is what you expect and therefore the Special Operations Executive (SOE) raid against the Germans in Goa is the most spectacular.

At the time, i.e. early 1943, Goa was formally not part of India but Portugal, which explains the German presence. A charming aspect of the British Goa raid, Operation Longshanks/Creek, was that enthusiastic and somewhat unlikely volunteers from the Calcutta Light Horse played a key role. Now, some of you who read this blog post may now be saying "that rings a bell", because you have seen a film from 1980 starring Roger Moore and David Niven, called "The Sea Wolves". That film, based on the 1978 James Leasor novel Boarding Party, was an early signal to the world about the particularly secret SOE operation. But I think you will find this book to be more interesting than that film, not least because it busts a few myths present in the movie.

You might recall from my blog post "A Deniable Operation Under The Swedish Flag" that Swedish aspects manage to pop up even in some very faraway places. Well Special Operations South-East Asia 1942-1945 reminds also of how the US Department of State chartered the Swedish ocean liner Gripsholm as an exchange and repatriation ship. It carried many Japanese and Germans to ports where she could pick up US and Canadian citizens - and bring them home. She sailed with a Swedish captain and crew and made 12 round trips. Exchanges took place at neutral ports such as Goa in Portuguese India. In the article below is a photo showing the Gripsholm in Goa 1943, unloading Red Cross supplies for internees and prisoners of war. 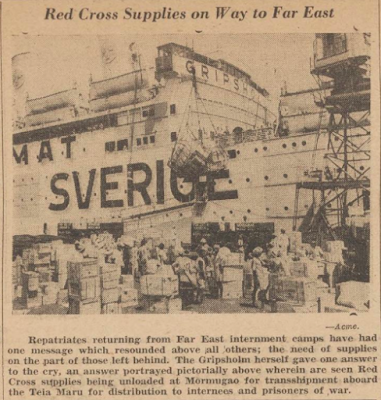 The Gripsholm in The Shanghai Evening Post and Mercury on 24 December 1943.
created by Lars Gyllenhaal at 20:07