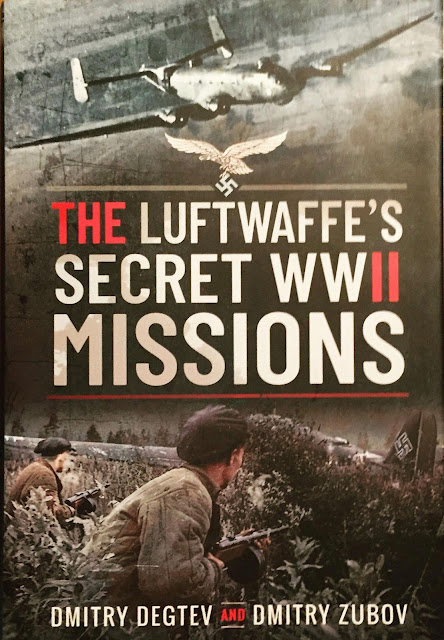 Prewar missions over the UK and Poland; German airfields behind Soviet lines and a "Tatzelwurm" mission against Stalin himself - there is so much amazing stuff in this book, and not just about the Luftwaffe´s most secret missions. Some spectacular photos are also in the book.

The two Russian authors Dmitry Degtev and Dmitry Zubov shed light on several German top secret missions with the help of both Russian archives and previous books only available in Russian. I reckon very few people in the West have seen most of the info and photos presented in this book. It starts with naming Luftwaffe officers involved in prewar reconnaissance missions over Poland, the Soviet Union and the UK. These missions were done mainly by using Deutsche Lufthansa aircraft and the first mission over the UK seems to have taken place in 1937. There are several exact officer and aircraft details in the text but here, like in other places in the book, one would have liked to have seen original documents and/or archival details - because the information is of such great interest. However, later on in the book some original wartime documents are shown, regarding other missions.

The invasion of Norway was of course preceded by secret Luftwaffe reconnaissance flights but nowhere before have I read about the exact aircraft used, and other details. There is also a Swedish connection as the reconnaissance aircraft mostly then used were Fw 200 Condors and part of the trip to and from Norway was a route over Sweden already frequented by civilian Fw 200s from Deutsche Lufthansa.

Most of the book is of course devoted to the Eastern Front and from these pages I believe almost every reader will learn new things about German spies, their equipment, the aircraft used and several secret German airfields behind the Soviet lines. The latter can be explained by very few radar stations, no Soviet night fighters as such and vast uninhabited areas. The many spy missions launched by the Germans over the Soviets, and much increased in numbers after the first German defeats, caused the Soviets to form two new formations: destroyer (anti-sabotage) battalions and a new type of security police, SMERSH, an abbreviation for "Death to spies". But, as the authors also note, quite often the Soviet security organs arrested people who had nothing to do with the Luftwaffe, Abwehr (German military intelligence) or SD (the SS intelligence service). These three German organs came to work together on the Eastern Front to such a degree that the title of the book might as well have contained the words "German special operations".

Having an interest in the Arctic I was especially keen to read the sections about German insertions in the Arkhangelsk and Komi regions. Even though I have read some about these missions in Finnish books I found lots of new details in The Luftwaffe´s Secret WWII Missions. There are also some to me new details about German operations in Iraq and Iran, even illustrated with a Luftwaffe aerial photograph of an airfield near Teheran. But even more spectacular are the often illustrated pages of the special ops with the rare and futuristic Ar 232 "Tatzelwurm". It had a distinct advantage for special ops: "When taking off and landing on rough ground, eleven additional pairs of small wheels under the lower fuselage came into play, to which special rubber caterpillar tracks could be fitted if necessary."

The highlight of the book is in my opinion the description of Peter Tavrin´s failed but still most amazing Kremlin mission, that includes both German and Soviet photographs and Soviet documents that highlight the role of a "Tatzelwurm" in this desperate 007-type mission to assassinate Stalin. These pages could quite easily be transformed into a blockbuster or a TV series (isn't there already a Russian movie?).

The book ends with psychological portraits of Hitler and the Abwehr´s Wilhelm Canaris, which might seem a bit odd given the Luftwaffe title. But after having read these portraits I think I see the point of the authors. With men like Hitler and Canaris at the top, no secret mission could have altered the final outcome.

created by Lars Gyllenhaal at 16:05