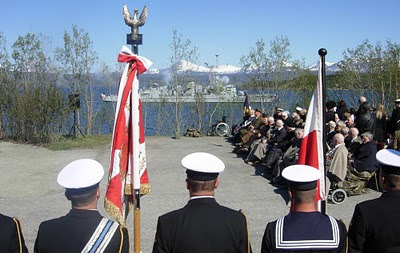 Never before have I met so many impressive and fit 90-year-olds, as I did this weekend in Narvik during the 70th anniversary of the liberation of Narvik (May 28). Narvik was in its best mood and also greeted modern soldiers from five nations including Germany.

In the town of Narvik summer had just arrived. Just a bit up into the mountains it was still late winter.

A Twenty-one gun salute was fired from a French frigate in the morning in honour of the attending veterans and other guests. After this, Norwegian F-16s and British Tornado fighters made some spectacular fly pasts above the crowd. Bands played. ambassadors - including Germany´s - held eloquent speeches and wreaths were layed on monuments and graves.

Most veterans seemed to be from Poland and Norway but there were at least three French alpine ranger veterans attending. Several veterans wore military berets and two Polish veterans wore complete uniforms. Here is one of them (click on the images if you wish to see them in larger size): 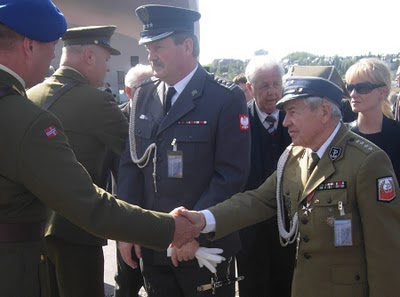 No German veterans were sighted but they were remembered too and there were modern German officers attending. The German flag was prominent in the parade that went from the common war cemetery to the main town square. 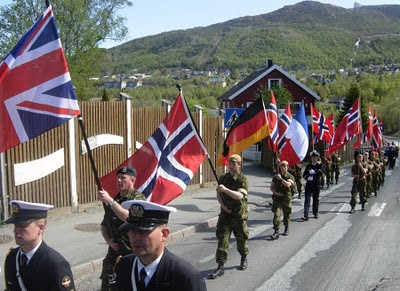 Note the third flag from the front, in front of the French flag. A bit surprising, I must say.

Edelweiss insignia was present, but not on German uniforms. It so happens that the Polish mountain infantry have the same symbol on their collars and right arm. 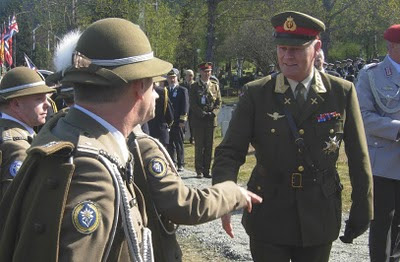 Greeting the Poles is Norway´s Chief of Defence, General Harald Sunde. And yes, that is a German officer to the right of him.

The main hosts of the ceremonies were General Sunde and Narvik´s town mayor Karen Margrethe Kuvaas, standing side by side in the following photo: 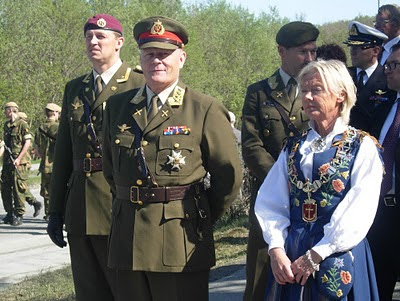 For me, personally, the most amazing veteran attending was Jan Danielsen, the last living Swedish veteran of Narvik. Danielsen was a Swedish cavalry officer when he in late 1939 volunteered for Finland and served in the "Winter War". This could be done with the approval and finally also support of the Swedish government. After Germany on April 9 1940 invaded Norway the Swedish government did not even approve of the formation of a volunteer corps for Norway. Still, Jan Danielsen and some 300 other Swedish citizens crossed the border with Norway to volunteer. Perhaps half of them saw combat. Twelve of the latter at Narvik.

Jan Danielsen was effectively given command of a Norwegian platoon in the high altitude fighting. His closest friend, from the same Swedish cavalry regiment, was killed in action. Still, he led his men onwards. That he and his men did not advance all the way into Bjoernfjell was no fault of Danielsen´s but of the larger strategy.

The following photo shows Jan Danielsen, wearing one of his Norwegian medals and his Finnish Winter War medal, together with local 1940 reenactor Jon K. Johnsen: 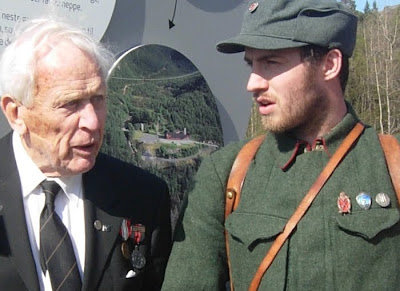 Johnsen is wearing the very same type of uniform that Danielsen wore in 1940.

There were more reenactors in the main town square, displaying WWII uniforms together with WWII military vehicles such as this British Humber scout car: 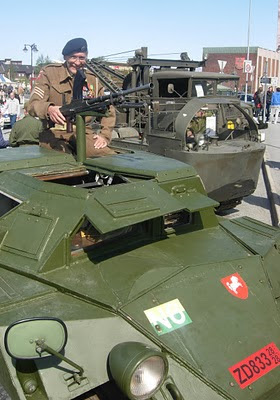 The Bren gunner is the former director of the Troms Defence Museum, Finn Fossum. Behind the Humber a M29C Weasel tracked vehicle can be seen.

Here is another reenactor, showing what the British airborne looked like: 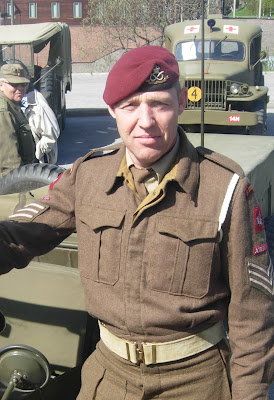 Behind him a magnificent Dodge ambulance can be seen. 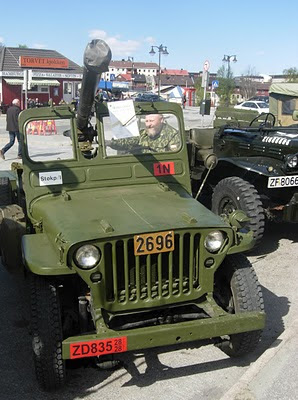 I will be writing more about the events of the day and individual Narvik veterans in two coming articles. The above photos are not the best ones I took. Hopefully the articles will later be online and I will then post links to them.

Finally just a photo to show you the view from our dinner table on May 28: 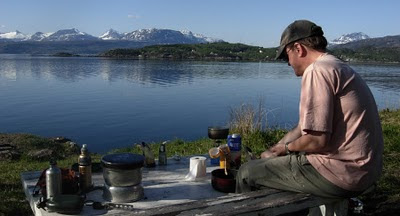 Sitting by the Rombak fjord is my good friend and travelling companion Mikael Norman. After dinner we followed the route of the Allied invasion force up into the mountains. Of course, we found several traces of the events exactly 70 years ago, thanks largely to local WWII historian Öyvind Johnsen, who has just released a very good battlefield guide. More about those traces in the coming articles.
created by Lars Gyllenhaal at 00:25