This place has perhaps the largest German helmet in the world: 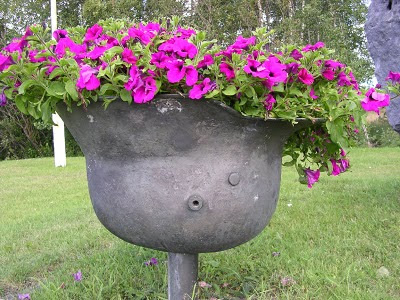 The diameter of the helmet is about one metre...

No idea which place I am talking about? Well, even most Swedes and Finns do not recognize its flag. The place is the Tornio Valley, it is the bilingual region situated where Sweden and Finland share a common land border. There are some rather unusual remains of both WWI and II in this area. To begin with the first one you see coming from Swedish Haparanda and entering the Finnish border town of Tornio, a beautiful wooden Russian chapel (below) for Russian border troops (cossacks) and other Russians serving in Tornio. Finland was a part of the Russian Empire 1809-1917. 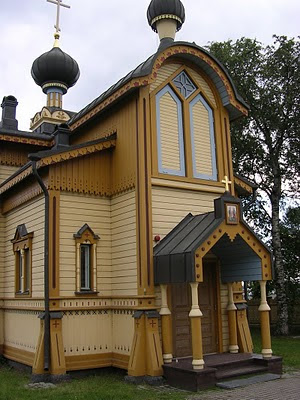 Also not very far from the main border road is this monument commemorating the WWI Prussian (German) 27th Ranger Battalion. Wait a minute!? Were there any WWI battles in North Finland? Not really, but because Sweden and Denmark were not willing to train Finnish youths seeking to form a liberation force during WWI, Finland turned to Germany. The Germans obliged and thus a stream of volunteers bound for Germany started to flow through the Tornio Valley. This is their largest monument in Tornio: 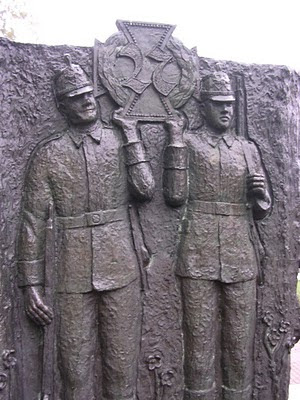 Notice the iron cross with "27", the battalion insignia. The same can be found on signs in and around Tornio denoting the illegal border-crossing paths of the volunteers, like this one north of Tornio in Jäkälänkangas, about 8 km west of Muurola: 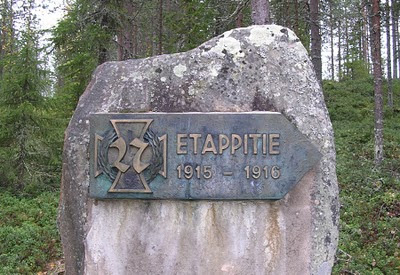 In Finland this battalion hold a very special place in not only the history books but still today among the general public. Because the battalion members were instrumental in forming the Finnish army. Even until the 1950s veterans of the 27th dominated the top military positions in Finland. Half a dozen members of the battalion were Swedish citizens. More about the unit and especially the Swedish-speaking part of it you will find in Swedes at War.

All graves of volunteers bear the "27" insignia, which is unusual in Finland where unit insignia is usually not displayed on graves. This one also being in Tornio: 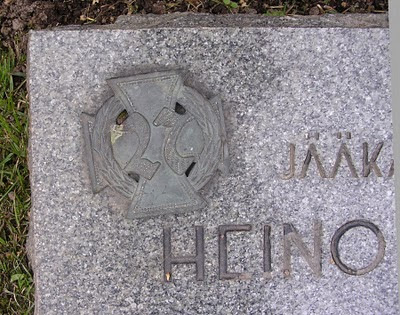 Although there was no fighting in the area during WWI there still is a large common grave for WWI soldiers, on the Swedish side, in the border town of Haparanda. The nationalities of the dead are reflected in that the monument has writing in both Hungarian, German and even Arabic. The Arabic alphabet was at the time used in Turkey and Turkish soldiers are among those buried here: 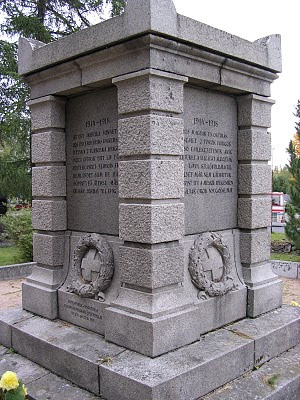 Why in Haparanda, Sweden then? Because this town was virtually the only place in Europe where there was the possibility to exhange POWs. Quite a few POWs got no further than Haparanda. Remember them too, when you visit Haparanda.

In the Torne Valley Museum, in Tornio itself, there are other reminders from both WWI and II, such as this Russian Maxim machine gun, used in both wars by all sides. 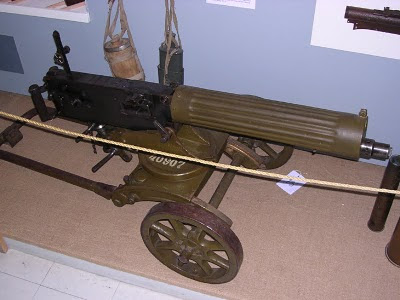 But why is a German paratrooper helmet also there? No German airborne troops are known to have operated in Finland. Does some reader of this blog know more? Here it is: 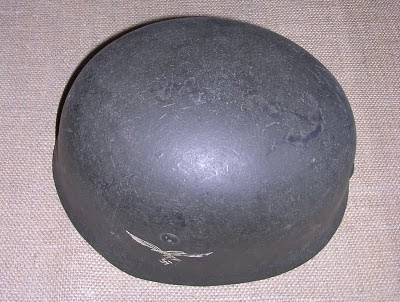 Driving along the Tornio river on the Swedish side the other week I made two discoveries. First this armoured turret which I reckon is either from WWII or the early Cold War. I had no idea we had such turrets right beside the Tornio river. Does someone know more about these? 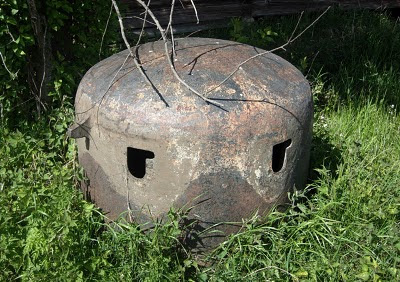 Not very far from the turret was a flea market where this German-looking helmet was sold for 100 Swedish Crowns (about 14 US Dollars): 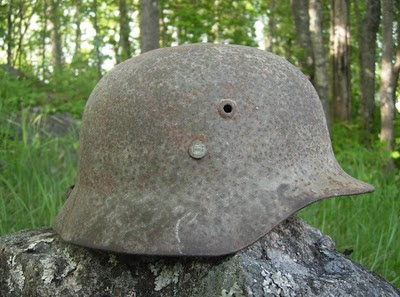 I do not really collect militaria any more, at least not as I did before. But in this case I couldn´t refrain. It turns out the helmet is in fact from Hungary, one of a lot sold/given to the Finnish Army. You can easily tell its Hungarian from the hanger in the back, to ease hanging the helmet from your belt.

A closeup of the hanger: 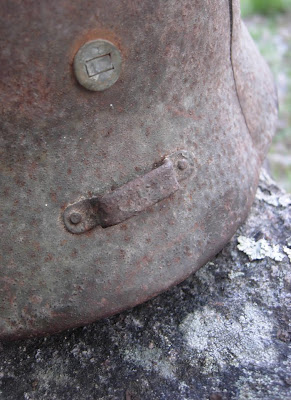 What about the German helmet at the very top of this page then? It is part of a monument commemorating the Finns (who in 1939-45 mainly wore German WWI and II helmets) who during the "Lapland War" fought against the German forces at Tornio in October 1944 (the Finns were under hard pressure from the Soviets to start killing Germans). It is situated right at the start of the road that leads to Tornio´s harbour. Is there a larger German helmet in the world I wonder? Well, I am sure there was, in the days of the Third Reich - but what about nowadays?

BTW I found out from the seller at the flea market that the Hungarian helmet too was from the Lapland War. It had been lying around on their property in Finland, on the ground surface, until the 1980s, when they finally picked it up.
created by Lars Gyllenhaal at 21:36