From Dürer To Darth

In a previous post I displayed an image from 1916 of the first pattern of the now iconic German Stahlhelm, the classic German helmet. But perhaps its history should be traced back to medieval times? I am equally fascinated by how the design survived 1945. So, lets examine the Stahlhelm from Albrecht Dürer to Darth Vader… 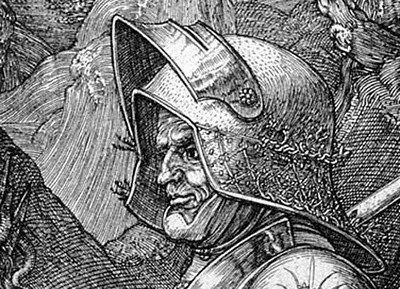 Detail from Albrecht Dürer´s painting "The Knight, death and the devil". 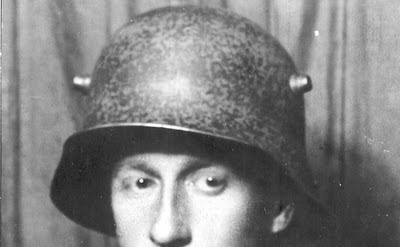 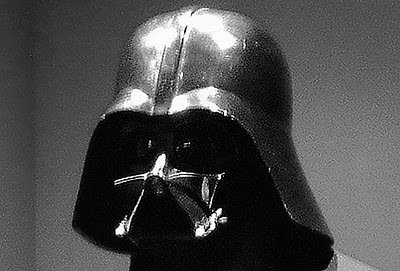 "When John Mollo needed to create a rough mock-up for Darth Vader [...] he grabbed a German helmet from the military room". The photo depicts not the mock-up but the end result. PHOTO: Andres Rueda Lopez

Somewhere in the back of my head was a memory of having read about how the basic Stahlhelm shape had medieval origins. Then the other day I was reading a German officer´s memoir that has yet not been translated into English, but ought to be: Zwei Brüder im Hitlerkrieg by Karl Wand. The English title would be Two Brothers in Hitler´s War.

Karl Wand served in the German Army in Greece and then on the Eastern Front. In France he served as an officer in Sicherungs-Regiment 1, stationed in Paris. Under the Valkyrie (Walküre) orders this regiment was to arrest the members of Sicherheitsdienst (SD) and Gestapo in Paris. This they did on the evening of July 20th 1944, without any great problems.

Regarding the Stahlhelm design Wand writes: "The origins of this type of helmets can be seen in Albrecht Dürer´s painting The Knight, death and the devil".

Because of its knightly origins, Karl Wand wanted to make a ceremony out of the first time he put on the helmet, as an infantry recruit in 1938. Wand: "a kind of crowning".

Thus it seems clear to me that German soldiers before WWII at least believed that their helmet had medieval origins.

But is there more direct proof that Friedrich Schwerd, the designer of the first Stahlhelm, actually was inspired by medieval sallet helmets, in German Schaller.

This article says this about Schwerd being inspired: "He knew his military history, citing the German sallet (Schallernhelm) as his model".

So, is it a fact then, that the Stahlhelm is a 20th century Schaller? I would like very much to hear from readers of this blog about this. Please use the comments function of the blog. But before you write, let me say that I do have the book World War One German Army by Stephen Bull. It does not state that the Schallernhelm was the model. It does say (p. 81) that "The resultant contour was, as Schwerd himself observed, something like the Schallernhelm of the Middle Ages [...]". In my opinion this quote does not fully match the previous one. So, more quotes and sources are very welcome.

Regarding how Stahlhelms were actually made there is this German WWII news reel I think you will want to see if you have not already seen it:

Unlike the Third Reich the Stahlhelm survived. In East Germany (GDR/DDR) by the introduction of the Wehrmacht´s last helmet prototype, the Thale B-II. This design was used, just slightly modified, by the East German Armed Forces until the demise of the Berlin Wall, and with it East Germany itself. But perhaps there are still some in service in the Third World - as several were handed out there as military aid. Has anyone seen it in recent years in Africa or Asia I wonder?

In the west the design was not used within the West German Army, but instead within the Bundesgrenzschutz, the Federal Border Force. The manufacturer of these postwar helmets had been producing M1940 helmets for the Wehrmacht. The name of the company, Quist, makes one wonder if not the founding family had Swedish roots. The Swedish word kvist/quist means small branch or twig. Here is a web page about the company, but it says nothing about the family itself. Does someone know more?

During the final years of East Germany the basic Stahlhelm design was adopted by the US Armed Forces. The result was the PASGT.

Finally there is the Stahlhelm in outer space... Surely, the helmet of Darth Vader can be considered as some sort of cosmic Stahlhelm? Well, it seems as if it was not that Teutonic to start with. This is what Mary Henderson wrote about the Vader helmet in her beautiful book Star Wars: The Magic of Myth on page 189: "Lucas told McQuarrie that he wanted [...] a large helmet like that of the Japanese samurai". Furthermore: "Vader´s mask and helmet evoke the armor of the Japanese feudal period: the kabuto, or helmet, had many different designs, but most featured a bowl-like crown that flared out at the back of the neck, often in overlapping metal plates. Vader´s one-piece helmet follows the same basic shape".

However, there is one more source one should examine about Vader´s helmet: the most comprehensive book I know about the original "Star Wars": The Making of Star Wars by J.W. Rinzler. In this book, on page 34, the helmet starts out like this, according to artist Ralph McQuarrie´s own words: "He [George Lucas] liked the idea of Vader having a big hat, like a fisherman´s hat, a big long metal thing that came down". So, there was no Germanic origin? Well, at a later stage uniform expert John Mollo was to finalize the design and this is what Rinzler writes about this stage on page 112 of his book, in Mollo´s own words "For Darth Vader, we put on a black motorcycle suit, a Nazi helmet, a gas mask, and a monk´s cloak we found in the Middle Ages department".

Mary Henderson basically states the same thing on page 164 of her book: "When John Mollo needed to create a rough mock-up for Darth Vader from the costume stock on hand at a costume warehouse in England, he grabbed a German helmet from the "military room" [...]".

So, at least in the last stages the Stahlhelm did indeed play a role in the evolution of the Vader helmet.

On a side note the "Star Wars" universe includes many more items from the Wehrmacht, less inspired and more Third Reich original than Vader´s helmet. Vader´s stormtroopers use both MG 34 and MG 42 machine guns; Han Solo has a blaster that is based on the Mauser C96 semi-automatic pistol of WWI vintage; some Jawas on the planet Tatooine (my favourite name for an alien planet) wear K98 Mauser rifle ammo packs.

So, to summarize: both Dürer and Darth are part of the Stahlhelm story - but perhaps not as much as I thought. Feedback most welcome!

P.S.
Since writing this post I have written this even more cosmic sequel to it.
created by Lars Gyllenhaal at 13:58