Being especially interested of war in the Nordic area I have grown interested of mountain warfare in general and therefore I cordially recommend this new video from the alps.

What an extravagant Monte Grappa reenenactment, with flame thrower and all. I have personally found some WWII German flame throwers up here in the Arctic that looked almost the same. I have some photos of my finds somewhere. If memory serves me right I found them on Kola and by Kirkenes. Have also seen some on the Narvik front and in the Lyngen line? Not sure about the latter, I am starting to mix up my trips!

Thanks for the tip, Klemen!
created by Lars Gyllenhaal at 21:14 2 comments: 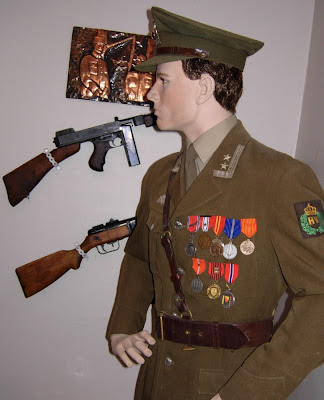 Alfred Henningsen was both in the British Secret Intelligence Service, Soviet NKVD and Norwegian Army. His uniform and weapons are on display in Setermoen.

Alfred Henningsen, a most unusual and highly decorated Norwegian WWII veteran, has passed away. Like Lars Åhlander, who also recently passed away, he was very helpful towards me.

Alfred Henningsen was incredibly active during WWII, serving as a Norwegian soldier in 1940; secret agent for the Soviet Union; special operator for the British Secret Intelligence Service and finally as a Norwegian Army officer in the Arctic. In 1945 he was in close combat against SS-soldiers, just barely survived and was taken prisoner. The full story will appear in a coming book of mine.

Here is Alfred's Wikipedia-page and obituary, published today. His uniform and many medals - only the Norwegian ones are on the uniform above - are on permanent display in the Troms Defence Museum in Setermoen.

Who was Lars Åhlander then? A talented writer and editor and certainly one of the greatest researchers on the subject of the Swedish minority in Ukraine. During both WWI and WWII these Swedes were conscripted to fight, during WWII both for the Soviet Union and the Third Reich. Many of the most interesting passages about them in Swedes at War 1914-1945 are the result of Lars Åhlander's research. Here is his obituary.

Thank you, Alfred and Lars, for all your support.


created by Lars Gyllenhaal at 18:49 No comments:

Just back from a family vacation in Denmark and south Sweden and will soon start blogging again. But let me recommend a new WWII trip blog right now, that I am unable to add to my blog list, for some weird technical reason: WW2 Landmark Scout. Check it out, and my blog list to the right that has some new additions.

Hat tip to Tom for the tip about Landmark.
created by Lars Gyllenhaal at 20:02 No comments: