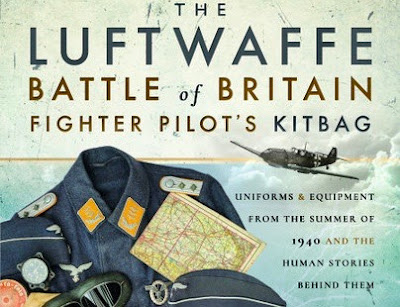 The cover provides a glimpse of the many excellent photos inside.

Having seen many books about uniforms and equipment I can say few are in the same league as The Luftwaffe Battle of Britain Fighter Pilot´s Kitbag by Mark Hillier. Yes, it is not about the invasion of Norway - but as the Battle of Britain began only a month after the fall of Norway, most items featured in this book were also used in the skies over Scandinavia.

As the long subtitle makes clear, Uniforms & Equipment from the Summer of 1940 and the Human Stories Behind Them, this book provides more than uniform photos and captions. It also contains rare and excellent period photographs and other illustrations, as well as text filled with insights and Luftwaffe terminology. The mostly large size photographs are splendid, all those showing preserved items are of course in colour.

Mark Hillier´s new book clearly demonstrates how different the Luftwaffe was in its uniform and insignia style, when compared to the army, navy and SS. My favourite section of the book is "Other Flying Equipment and Paperwork" because it includes two types of watches, the Luftwaffe basic flight computer and ground strafing/dive bombing flight computer, maps, pencils, logbook, Wehrpass and handbook.

This is a very useful guide for museum staff, private collectors, the film industry, reenactors and model figure enthusiasts.

created by Lars Gyllenhaal at 23:11 No comments: 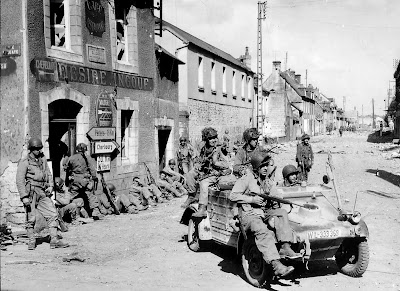 The captions in The Americans On D-Day & In Normandy are mostly very informative and the book includes good credits, notes and references. A few of the photos I had seen before - but Brooke S. Blades has then provided a better caption than in previous publications. Several of the images are not only interesting for military historians but are just really amazing photographs - I was baffled I had not seen these before. Several maps and after the battle photographs (so important for trips to the area) make this book a must to bring along on my next trip to Normandy. Simply put, The Americans On D-Day & In Normandy is the best photo book about Normandy 1944 that I have so far come across.
created by Lars Gyllenhaal at 16:46 No comments: 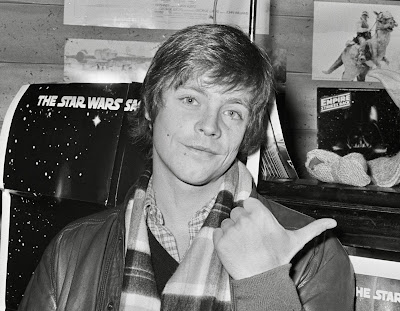 First to be filmed back in 1979 was Mark Hamill. PHOTO: Dutch National Archives

Forty years ago, the filming of "The Empire Strikes Back" began. The location is more spectacular than most people realize - it is connected to Hitler´s "Uranprojekt".

The first planet you get to know in "Star Wars" (later retitled "Star Wars: Episode IV – A New Hope") is Tatooine, one big, hot desert. Principal photography for that movie began in March 1976 in Tunisia. So, to contrast nicely, the filming of the sequel began near a remote Norwegian village, Finse, on March 5, 1979. The wilderness around Finse, mainly the Hardangerjøkulen (Hardanger Glacier), portrays Hoth, a planet consisting basically of an endless desert of ice and snow. Hoth is the home of the Rebel Alliance's secret Echo Base.

For fans who would like to visit Hoth/Finse, THE place to stay is Hotell Finse 1222, where the now mega-famous cast and crew lodged. Most of the Hoth locations are pretty close to the hotel. Now, to really experience the large Norwegian chunk of "The Empire Strikes Back" there is a special program taking place in Finse March 8-10. But ultra fans will of course be there earlier, to reenact the first scene with Mark Hamill, that was filmed on March 5 due to a bad snow storm that began the day before. The storm made filming that day on the glacier virtually impossible, so director Irvin Kershner instead filmed a scene in which Luke Skywalker was mostly just crawling in the snow. This scene was possible to film with the camera within the hotel. Thus, when Hamill/Skywalker escapes from the snow monster he is actually just some metres from his warm and cozy hotel.

The weather did not stop challenging the production and some props were very well covered with snow. According to a reliable Norwegian source, a few years ago it was still possible to find remains of "The Empire Strikes Back" on the glacier. Now I reckon there are very few, if any, left outside, but at least there are some nice photos in the hotel, as well as an original rebel "ski cap" left behind in 1979. What will always remain is the Hoth landscape, and the atmosphere.

What many Star Wars fans have not realized is that this part of Norway is of global significance not just because of "The Empire Strikes Back". Only some 100 kilometres southeast of Finse one finds Vemork, a hydroelectric power plant outside Rjukan. Vemork was the site of the first plant in the world to mass-produce heavy water - needed for the German nuclear weapons program, the "Uranprojekt". My latest book in Swedish, Elitförband i Norden, happens to partly be about the Special Operations Executive (SOE) sabotage operations that destroyed the heavy water production. So, if you are both a true Star Wars fan and WWII buff, you ought to combine your visit to Finse with seeing Vemork and visiting the museum there.
created by Lars Gyllenhaal at 22:44 No comments: