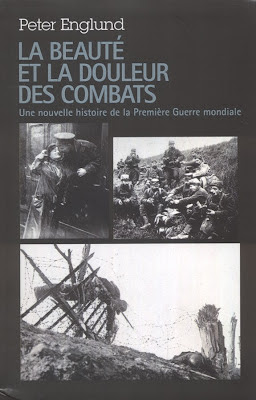 Foreign legionnaire Elow Nilson is highlighted in the French edition of Swedish author Peter Englund's "The Beauty and the Sorrow".

Life is good. The author who has inspired me more than any other has sent me his latest book with a dedication as a thank you for some information I provided.

Hardly anyone expected a Swedish book about WWI to get such fine reviews from a global audience. The Beauty and the Sorrow: An Intimate History of the First World War was published first in Peter Englund's own language in 2009 and has since been published in English, German and now also French as La beauté et la douleur des combats.

I have no part in the Swedish edition but played a tiny part in the French edition by providing Peter Englund with some information about the Foreign Legionnaire Elow Nilson, a Swedish volunteer that I wrote about in Swedes at War (first published in 2004) and then Lina Sturfelt wrote more about in her book Eldens återsken ("Reflections of Fire", published in 2008).

Elow Nilson is not part of the Swedish, English and German editions of The Beauty and the Sorrow but only the French edition. Lina Sturfelt's part in restoring Nilson to our collective memory is larger than mine but I am nevertheless proud to have done something for him.

The impact of Peter Englund's book Poltava, available in English as The Battle That Shook Europe: Poltava and the Birth of the Russian Empire is hard to overstate. The book was released the same year I began my military service, 1988, and affected me in many ways. It inspired me to pursue a career not in the army but in military history. But not least it also made me think how odd it is that of the nine Gyllenhaals who were officers under king Charles XII (who lost at Poltava) only one died in battle. How and why did my namesake and direct forefather survive those most extreme years in Sweden's history?

It can be noted that Peter Englund dedicated The Beauty and the Sorrow to the memory of private Carl Englund, who was killed in action outside Amiens on September 13, 1918. He was wearing a uniform of the Australian army, being a member of the 3rd Australian division. He had participated in and survived Passchendaele...
created by Lars Gyllenhaal at 14:07 No comments:

It is not every day that you get several new facts about Raoul Wallenberg. BTW I just also learnt that Alex Kershaw's book about Wallenberg has been translated into Swedish.
created by Lars Gyllenhaal at 09:14 No comments:

However, Mr. Onoda was not the very last Japanese holdout. Teruo Nakamura gave up a few months after Onoda. But we are still talking about 1974. Then there are the reports from 1980 about one Fumio Nakahara...

But, at any rate, I reckon that today, in 2012, there is no living equal to Hiroo Onoda. His attitude was fanatical, to put it mildly. Nevertheless I am in awe about his long war, his survival skills and can recommend his autobiography. My favourite quote from it: "After 19 days at a Tokyo hospital, where over 200 tests were performed on me, it turned out that both my physical and mental health was far better than with Japanese of my age living in modern societies with dense population."

One of the reasons for my interest in Japanese holdouts is that there were some similar soldiers in the Baltic countries. I also had a personal encounter in the 1980s with a Swedish war veteran in Östersund (province of Jämtland in Sweden) who in 1948, as an officer of the US Navy, captured a colleague of Mr. Onoda. I mention the episode in Swedes at War and will return to it with more details in a future book.

Incidentally, the other day I found out that there is an online Japanese review of Swedes at War. From computer translations I gather it ends with a positive recommendation. Japanese-speaking readers of this post are most welcome to provide a proper quote...

P.S.
Since I wrote this post in 2012 Hiroo Onoda has passed away, in early 2014. I have replaced the video that I linked to in 2012, as it was taken down on Youtube. The new video is, I think, better than the previous one.
created by Lars Gyllenhaal at 16:57 1 comment:


German newsreel about the advance into one of Estonia's most Swedish parts, not far from Swedish Gotland.

I just stumbled upon this amazing Estonian website with then-and-now comparison photos from Dagö/Hiiumaa, one of the parts of Estonia most associated with Sweden.

The WWII photos are all taken from the above Wochenschau (German newsreel). I can imagine the amount of sweat behind those comparison photos, as I have done similar work.

But what I really was looking for was another Wochenschau from the same period, the fall of 1941, showing the Swedish Volunteer Battalion on the Finnish peninsula of Hangö. I am still lookig for it - tips are most welcome.
created by Lars Gyllenhaal at 13:07 No comments:

"An Enemy To Die For"


I am very, very excited about this Swedish WWII thriller that premieres this Friday.

"An Enemy To Die For" is a new film by the Swede Peter Dalle. It mostly takes place in one of the most harsh but also beautiful landscapes I have ever experienced: Svalbard.

I am most eager to see this one. Above is the latest trailer and below is a making-of:

created by Lars Gyllenhaal at 09:01 No comments:

The above trailer for the upcoming shooter "Medal of Honor: Warfighter" indicates that Swedish and Norwegian special forces soon for the first time will appear in a video game.

A long list of special forces share the abbreviation SOG. But I am pretty sure that the "S SOG" mentioned in the new game trailer can only mean Sweden's Särskilda operationsgruppen, which was formed last year from two SF units (SSG and SIG). Spain too has a SOG, but Spain is usually not indicated by a S but by ES. In addition, Norway's FSK-HJK appear just before "S SOG".

Swedish special forces in the game also don't seem that odd considering that the game engine is Swedish, the same as in "Battlefield 3".

In Swedes at War two of the "grandfathers" of Swedish special forces are featured quite extensively: Allan Mann and Erik G:son Lewenhaupt. Both served in Norwegian/British elite units during WWII. Incidentally, Allan Mann served in Kompani Linge of the Special Operations Executive (SOE), a direct precursor of today's Norwegian FSK-HJK. In addition to Allan Mann there were 5 or 6 more Swedes within the SOE, but these had no impact on postwar developments.
created by Lars Gyllenhaal at 21:53 4 comments: