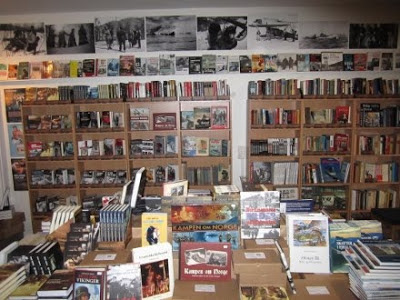 Now in central Narvik, lots of military history books. Both new and old. 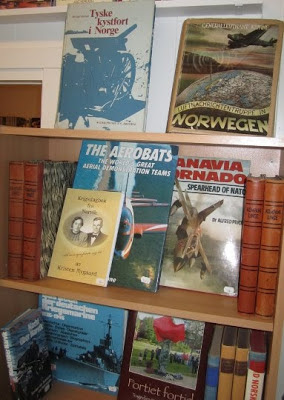 Some really rare old books, in several languages, are now for sale in Narvik.

It is with great pleasure that I now can announce that my friend Trond Kristansen in Narvik has moved his military history bookshop to central Narvik, to Kongens gate number 22.

Of course, the bookstore has extra many books about WWII in Narvik and the north in general. Congratulations and best wishes from Arctic Sweden! All you have to do now, Trond, is make a short English summary on the shop´s website.

created by Lars Gyllenhaal at 10:30 No comments: 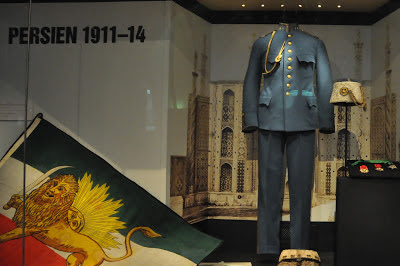 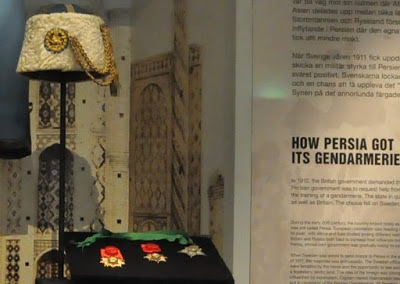 A complete uniform, orders, medals, maps and photos are now on display in Stockholm. PHOTO: Leif Nilsson/SMHA
created by Lars Gyllenhaal at 09:35 No comments: 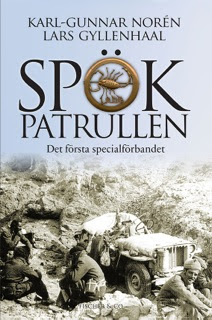 Soon printed: "Ghost Patrol" by Karl-Gunnar Norén and yours truly. The front features an original LRDG scorpion badge inside the Swedish title. 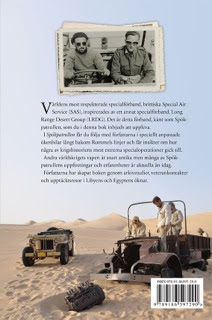 The back features a hitherto unpublished LRDG photo (more inside) and a colour photo of the 2012 LRDG tour in Egypt (more inside!).

Today I finished the rather tiresome but very important work of responding to questions from the editors of Ghost Patrol, Karl-Gunnar Norén´s and my coming book about the Long Range Desert Group (LRDG) and its legacy.

Thank you Lena and Kajsa for all your work! I am very pleased and especially that the photos of the WWII wrecks still in the desert, taken just some months ago, will be printed in colour. Thank you Mikael at Yours for the superb cover! I always want to work with you when it comes to covers. Right now I feel quite elated because all that is left now for me to do is to check the complete book just before the first edition is printed, which will happen in not that many days time.

Feeling good and thank God its Friday! (have to find that old disco song...)

P.S.
Yes, there is some interest abroad among publishers. But too early to say more.

created by Lars Gyllenhaal at 16:33 No comments: 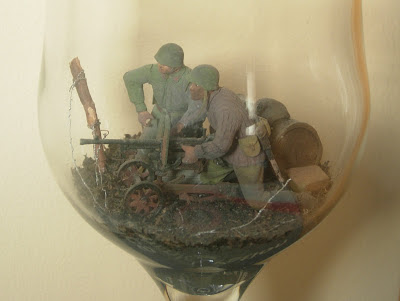 Yes, the Red Army infantrymen are placed in an ordinary drinking glass.

Recently two friends presented me with a Russian-made 1/35 scale WWII diorama (or vignette) of a kind I have never seen anywhere before. The idea is so simple, yet...

During my teens I was an active modeller and took part in some national competitions. Once I won a prize. I haven't done any serious modelling since then, but have recently done some simpler kits with our son, and found great joy in so doing. Sometimes I pick up modelling magazines, and when in Stockholm I at times check out hobby stores, to see finished kits on display and see whats new. I do not have to buy anything as I have lots of unbuilt kits. So, I kind of have an idea of what is going on in the modelling world, yet I have never before seen anything like this glass: 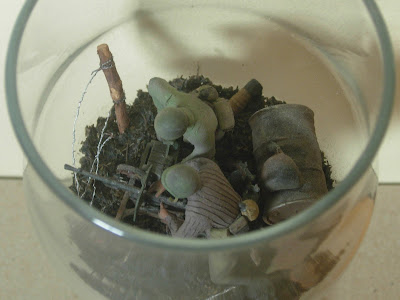 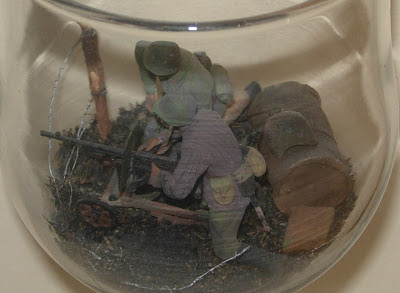 Note the helmet straps and telogreika winter jacket on the closest man.

Unfortunately, my friends who gave me the glass do not know who made it, as they are not even sure who gave it to them. They were presented with a lot of stuff on their recent trip to Russia, by a lot of different people. Someone gave them this glass without showing it, it was covered.

In Sweden, giving away presents is a serious matter. In Russia people just love to give away stuff even to people they have just met. I have experienced this myself. The Russians are truly generous hosts, I dare say.

Well, have you ever seen a diorama (or vignette) like this before? If so, where?

created by Lars Gyllenhaal at 18:41 No comments: 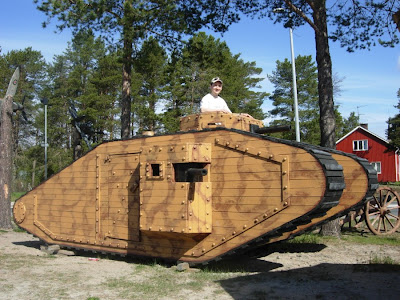 Yours truly in wooden Swedish-made Mark V in Sangis, Sweden. I reckon the scale is something like 1:1,5. PHOTO: Mikael Norman

I recently wrote about the British Mark V that has been magnificently restored in Arkhangelsk, Russia. Well, it is not the only British WWI tank in the Arctic if one takes into account this wooden model standing right beside the E4 highway in Sangis in northernmost Sweden. 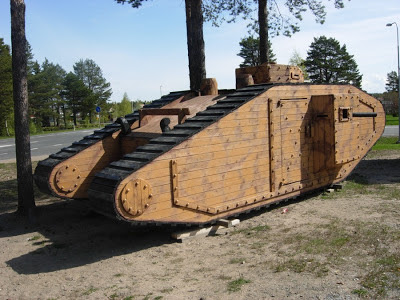 Yes, the doors open so one can go inside. 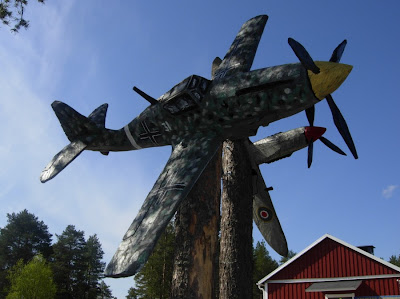 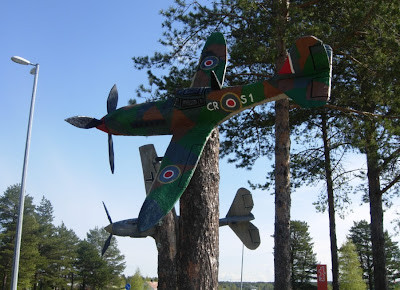 The German fighter is in a dogfight with this Spitfire-inspired aircraft.

Sangis is a small village between Luleå and Haparanda. Beside the models there is a military surplus store that at least has had some WWII items. I understand that the models are unique and made by one and the same person, a friend of the owner of the surplus store.

P.S.
Since I wrote this in 2012 some additional large scale models have been added like a wooden Jeep and a UFO.
created by Lars Gyllenhaal at 09:43 1 comment: 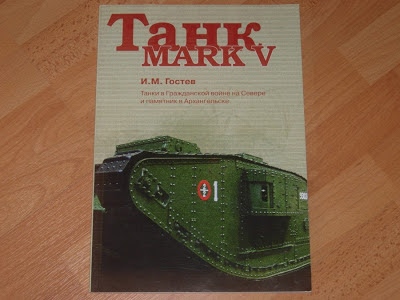 Luftwaffe vs RAF in Norway 1940

"Into the White" seems like a really well-made movie about Norway in 1940.

Hm, when will this one be shown in Sweden? Will it ever get to our cinemas or must we wait for the DVD?