Behind the Death Star

This is how the BBC did the death star news.

Being a Star Wars fan I of course had a good laugh at the witty response of the White House to the Death Star petition. BTW, Death Star is a bit vulgar, as true fans know. The actual name is DS-1 Orbital Battle Station...

To talk about something more serious but still Star Wars-sounding, I´d like to bring up A2/AD. Yes, it does sound like an uncle of a certain droid (R2-D2) but it is something very real that is driving military strategy, not least the strategy of the United States. What A2/AD means is anti-access/area denial weapons (capabilities) and I just read a great piece about their impact, in Foreign Affairs: "Strategy in a Time of Austerity". In the same issue (Nov/Dec 2012) there is an extremely topical article about US China strategy: "The Problem With the Pivot". The latter is a most interesting background to yesterday´s bad news from the East China Sea.

created by Lars Gyllenhaal at 10:44 No comments:

Next Up: Plane Duel?

One of the latest Chinese reports about the escalating conflict in the East China Sea.

Two weeks ago I wrote that "I reckon that the East China Sea holds the greatest dangers during 2013".

To my horror, things are going in that direction. Sweden, where I live, may be very distant from the East China Sea, but I do not think a degree in geopolitics, economics and military strategy (I have none of those BTW) is necessary to realize that the repercussions of even just a plane duel between China and Japan could be grave not only for the Pacific region. Such a duel now, sadly, seems quite plausible.

As is mentioned in the above linked article, the US Marine Corps detachment on Okinawa is not that far away from the centre of this dispute. As I wrote in Swedes at War there was a Swedish volunteer who took part in the final WWII battle for Okinawa. I met this gentleman, John Paul, in the 1980s and am later this year writing a book with a full chapter about his highly unusual experiences in China and in US naval service against Japan.
created by Lars Gyllenhaal at 16:55 3 comments:

The Most Expensive Cuff Title? 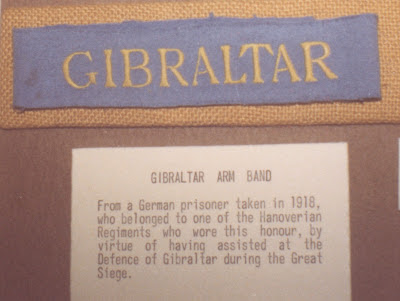 German WWI cuff title kept in a museum in Gibraltar.

While looking for something else I stumbled upon this photo of a German WWI cuff title that I must have photographed in 1987, when I hitch-hiked Stockholm-Gibraltar-Stockholm.

I have always liked cuff titles, i.e. not collecting them as I have never had that kind of money (reproductions don't interest me), but just seeing them and learning about their history. I reckon the above one must be one of the most rare and expensive ones there is. I do not recall the name of the museum I found it in on Gibraltar but I think it was the main museum of the rock.

But why the Swedish colours???
created by Lars Gyllenhaal at 19:07 No comments:

From the set of the coming 3D IMAX movie "Stalingrad".

In three weeks it will be 70 years since the German surrender at Stalingrad. I had a small role in the translation of a book about the battle of Stalingrad, A Writer at War by Antony Beevor and Luba Vinogradova.

A Writer at War is a book about the author of the epic Stalingrad novel Life and Fate, Vasily Grossman. Le Monde called Life and Fate "the greatest Russian novel of the twentieth century". Comparisons have also been made abroad to War and Peace. In Sweden, however, I do not recall that the release of the new Swedish edition of Life and Fate resulted in much publicity. But on December 27, Sweden´s leading newspaper published this article by Roger Fjellström that describes the tragic and amazing story behind the manuscript that became Life and Fate.

Well, better late than never. And I suppose the same thing can be said about the making of the answer to Oliver Stone´s "JFK". The answer is called, like the book it is based on, "The Kennedy Detail". The filming will start in March and the director is my Californian relative Stephen Gyllenhaal. I am almost as keen to watch the coming Russian 3D and IMAX movie "Stalingrad", although I am no fan of 3D.

P.S. You might want to read what I have written about the German Stalingrad posters in Norway, in case you have not already read that post.

We may have some world-class recruitment ads, but what will there be left to join in 2014?

Sweden's top general ended 2012 by publicly stating that the Swedish Armed Forces can only defend against one minor attack and only for one week. The Swedish Minister for Defense then conceded that Swedish security policy is basically wishful thinking.

Of course, Minister of Defense Karin Enström did not use such words, but that was the essence of what she said. On top of that, our top general, Sverker Göranson, verified to our nation's one and only defense correspondent, Mikael Holmström, that he still believes it may be necessary to scrap a full branch of the Swedish Armed Forces, due to the defense policy of the Swedish government. Personally, I think the most serious deficiency of the policy is not a lack of funding but what is behind it, a lack of interest and consequently also understanding.

I believe there is little more General Göranson could do except resign in protest.

To say that the above disturbs me is putting it very mildly. Sadly, the civil defense of Sweden is hardly in any better condition. In fact, the Swedish state seems to even lack basic ideas about how to tackle a severe global crisis of some sort.

Strangely enough, our media has largely failed to report that our closest neighbour, Norway, is doing the opposite, spending more on defense during recent years and especially improving training, even prolonging the basic training period for conscripts at the northernmost border. In fact, last fall Norway even established a new branch of the Norwegian Armed Forces, the Norwegian Cyber Force.

created by Lars Gyllenhaal at 15:20 5 comments:

The well-established Israeli newspaper Jerusalem Post on Saturday wrote about a coming Israeli documentary film, "Revealed: Hitler in Argentina". The film will no doubt result in more articles about it during 2013. Here is my take.

"Revealed: Hitler in Argentina" is inspired by the book Hitler’s Escape by Patrick Burnside, but the Israeli filmmakers have added research of their own, all according to the Jerusalem Post article. However, as I have read the book Grey Wolf (2011) by the British authors Simon Dunstan and Gerrard Williams, I am struck by the similarities with that book. From the JP article and the trailer it links to it seems quite clear to me that "Revealed: Hitler in Argentina" and the coming book by Burnside differ not that much from Grey Wolf.

One does get a thousand or so facts from reading the sometimes exciting Grey Wolf but, ultimately, it is a mystery to me why the authors, one of whom (Simon Dunstan) has written a long list of serious books on military history, chose to release this book as a serious book and not semi-fiction. Because aside from facts and some sane conclusions the book contains a long row of unbelievable statements and conspiracy theories. Simply put unconvincing when it comes to the most important parts, the escape via Denmark (remember, there is always a Nordic connection!) and Argentinian aftermath.

What is highly interesting is how and why Argentina and other South American states actually did harbour so many Third Reich mass murderers, not least Josef Mengele, Adolf Eichmann and Croatia's own Hitler, Ante Pavelic. Grey Wolf contains some passages about these as well as the less known SS-general Ludolf von Alvensleben. However, these and some Berlin 1945 parts can't save the book.

As I see no indication of the coming film and book doing a better job than Grey Wolf in presenting basically the same story, I have grave doubts about them.

created by Lars Gyllenhaal at 23:58 No comments: