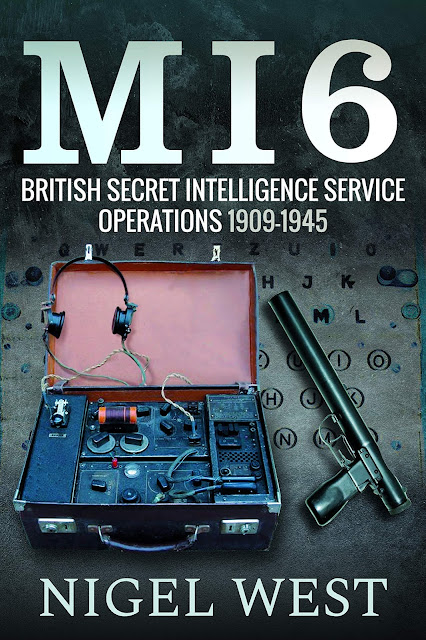 That strange gun on the cover is a Welrod, a British bolt action suppressed pistol.

Having reviewed Nigel West´s Secret War: The Story Of SOE, I must of course also review his take of the organization that SOE quite often found itself in conflict with, MI6/SIS, i.e. the home of James Bond.

Being an entirely factual book, Nigel West´s MI6: British Secret Intelligence Service Operations 1909-1945, does not waste words on James Bond and only mentions Ian Fleming on one page. Fleming is mentioned not because of his later secret agent novels but due to the fact that he during WWII was an assistant to the Director of Naval Intelligence. However, it is hard not to think of Captain America´s enemy Red Skull when reading about agent SKULL, one of the most important double agents of the war in West´s opinion.

Secret intelligence operations can be hard to explain and summarize. Yet, West often manages to do so. One of the most catastrophic aspects of the the initial stage of the intelligence war 1939-45 is how almost unbelievably unprepared the British were for the eventuality of Germany actually overrunning other countries. In spite of six years of Hitler in command of Germany the SIS had set up no stay-behind networks. Initially there were not even aircraft to fly agents into occupied Europe. Such a unit, 419 Flight (Special Duties), was set up only in July 1940.

Well, what about my favorite aspects of any WWII book, the Nordic aspects? The Norwegian heavy water is of course covered but after the German invasions of 1940 the SIS was itself not that active in Norway and Denmark. In those countries intelligence gathering was mainly performed by the SOE. Stockholm was much more of a stage for the SIS, and West provides a wonderful picture of how absurd it was to be stationed there considering that "[...] personnel from the German, Japanese and British [embassies were] all visiting the seaside together on Sundays during the Swedish summer".

Nigel West is very clear about his view of SIS performance in Stockholm during WWII: "The Stockholm Station was arguably the most successful of the war". West also states that thanks to "unofficial assistance" from Swedish military intelligence, more than fifty Norwegians were detained in Sweden as known infiltration agents from the Sicherheitsdienst in Oslo.

Like West´s SOE book, MI6 is not new but a new edition of a 1983 book. Still, MI6 by Nigel West is a highly readable book and ought to be a useful source for many years yet to come.
created by Lars Gyllenhaal at 20:24 No comments: