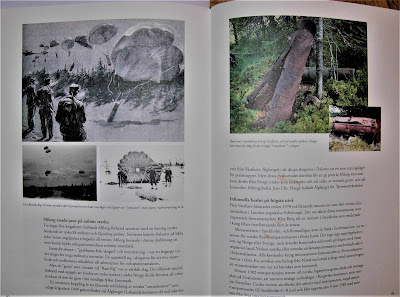 As a reader of this blog you might recall that I have quite often mentioned the parachute operations around Narvik. Amazingly, the not-that-hard-to-find parachute container that I blogged about back in 2010 is still (2016) in situ. Finding any kind of traces of WWII still out in the open is a memorable experience, but finding airborne-related materiel is special indeed.

A new book about Norway and Sweden during WWII shows how parachute containers still today can also be found in situ in Vassfaret, south Norway - see the above photos. I am also glad to see that Swedish Narvik veteran Jan Danielsen is mentioned in the book, entitled Norway´s Thanks To Sweden (In Swedish: Norges tack till Sverige). Generally speaking, the book is filled with WWII in Scandinavia facts, photos and other illustrations. And now comes the most unexpected part - the book is directly available as a free e-book on the new English/Swedish website www.norgestack.se 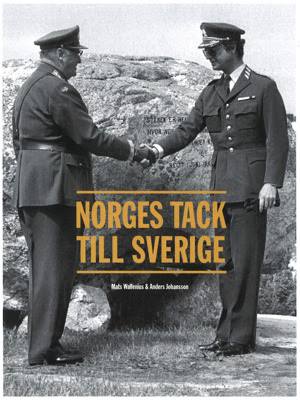 The kings of Norway and Sweden are on the cover with the "police troops" stone.

The authors, Mats Wallenius and Anders Johansson, have done a great deal to make Swedish covert and not-so-covert support for Norway during WWII more known to the general public. Their work can also be seen out in the open in Stockholm, as they were key persons behind this year´s move of the huge Norwegian "police troops" stone, taken from the Norwegian resistance stronghold Vassfaret (where many parachute containers were dropped). Now, thanks to the move, more residents and guests in Stockholm can see and touch a big piece of Scandinavian WWII history that hopefully will contribute to a broader understanding of Sweden´s support for Norway. 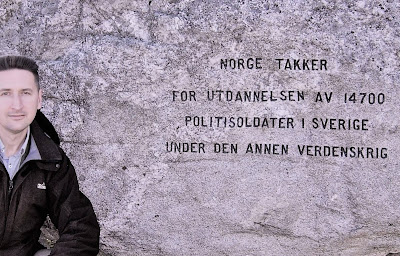 So, during the coming holidays, do please visit www.norgestack.se

Wishing you a Merry Christmas.

created by Lars Gyllenhaal at 12:47 No comments: 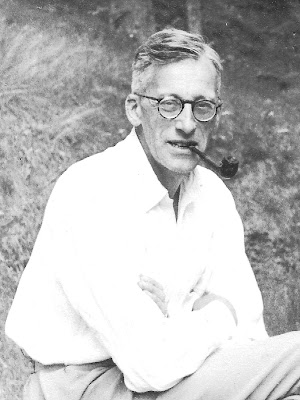 While researching for Swedes at War 1914-1945 I came across some pretty unexpected foreign volunteers for Finland during the Winter War of 1939-40. But I missed one very remarkable German who defied both Hitler and Stalin, only to later return to German service in spite of being considered partly Jewish. The first book about him is now out.

The Winter War had an attraction similar to the Spanish Civil War, it made people volunteer from near and far. Just two examples: the US President’s son Kermit Roosevelt recruited a “Finnish Legion” in London that went to Finland with 230 legionnaires. The elderly French general Clement-Grandcourt signed up as a private, but was made an officer when he arrived at the volunteer center in Helsinki. Well, now Lars Westerlund of the National Archives of Finland, author of several books about 20th century wars, has documented one of the 15 Germans who chose to fight for Finland in spite of the Molotov-Ribbentrop pact. For the Bavarian Otto von Zwehl this was a step that was not as strange as it may sound, as he was among the German officers who had fought for Finland back in 1918. The year after he became a Freikorps volunteer in his native country, the commander of the artillery detachment of the Freikorps Probstmayer.

What made Otto v. Zwehl´s decision to volunteer for Finland in 1939 very special indeed was that he was then both a civil servant of the Third Reich and, according to the same state, a Mischling, meaning mixed-blood, to be precise a Vierteljude ("one-quarter Jew").

As a resident of Finland since 20 years, Otto v. Zwehl felt it was his duty to volunteer for Finland when Stalin attacked on November 30, 1939. In late December 1939 his application was accepted and he was put in charge of a motorized battery of Finland Swedes. The vehicles of the unit got markings consisting of a "Z", for Zwehl, followed by a number. In Germany, the authorities were not happy - when Hitler heard of von Zwehl´s step he "blew his top". Lars Westerlund writes that Hitler then personally made sure that Otto v. Zwehl lost his German citizenship.

In record time, though, von Zwehl was granted Finnish citizenship and refused to follow the advice to emigrate to the United States.

One year later and in spite of how he has been treated by the German state, Otto v. Zwehl became a Finnish volunteer in the German Army in Finland. As a modern reader one finds this decision particularly hard to understand. Here one misses an interview quote from Otto von Zwehl. However, Lars Westerlund has managed to put together an amazing biography even though von Zwehl died in 1960. The book provides very valuable insights into Third Reich policy toward Finland, as well as the German community in Finland. This book also constitutes one of the first Nordic books about Mischlinge in German uniform during WWII, a subject pioneered by the US historian Bryan Mark Rigg.

Otto v. Zwehl is so far only available in German, as an e-book via Amazon or as a book-on-demand in Finland.

created by Lars Gyllenhaal at 13:32 No comments: