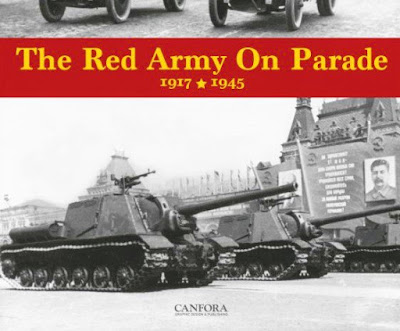 This book is filled with Soviet AFVs, including types most people have never seen.

Once in a while a truly original book on armoured fighting vehicles (AFVs) appears. This is the case with The Red Army On Parade 1917-1945 by the British author James Kinnear.

First, it delivers more than one might expect from the front cover - this book is not only about the parades on Red Square until 1945, it also has amazing photos from other Soviet cities and also from the 7 September Allied Victory Parade in Berlin, where the IS-3 tank made its shock appearance. Looking at the Berlin IS-3 photos it is hard not to feel an urge to immediately build a scale model of it. Well, throughout the book there is plenty of inspiration for all kinds of military vehicle buffs. One also starts to wonder about a lot of things, like where there might be a preserved "Pioneer", a kind of tracked jeep that proved to be a failure but still has some amazing looks. And why have I also never before seen a SU-5-2? Or those magnificent Soviet VJ Day images of Harley-Davidson WLA-42s with PTRD anti-tank rifles. Yes, anti-tank motorcycles!

Not just many (most) photos in the book are previously unseen in the west, The Red Army On Parade 1917-1945 also contains plenty of valuable text about Soviet AFV evolution. There is even a foreword by the current Russian minister of defence, General Sergei Shoigu, including some words from him about Sweden: "The first parade took place in times of Peter the Great, when Moscow was saluting the Russian troops that had defeated the Swedish Army at the Noteburg fortress in 1702." By the way, Noteburg = Nöteborg, meaning "Nut-fortress", was later renamed Shlisselburg.

The Swedish publisher of this book, Canfora, has again managed to surprise tank buffs (as well as truck and motorcycle enthusiasts) with plenty of new and amazing material. But let me also recommend aircraft buffs to visit the Canfora website.

created by Lars Gyllenhaal at 10:06 No comments: