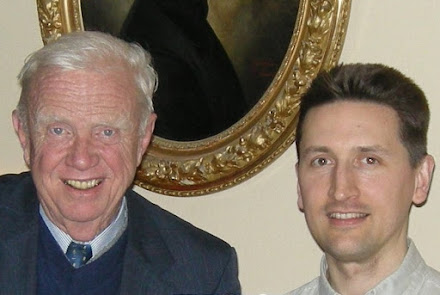 With Carl Finstrom, instrumental in bringing to light Swedish WWII history, in 2010.

At the time of writing, a colonel of special significance for modern Swedish history is being interred at the Arlington National Cemetery outside Washington. He had a very Swedish name: Carl Gustav Finstrom (originally Finström) and his parents were from Sweden and Norway. But Carl, as he mostly was known, was a US citizen and officer. But most of all he was a gentleman.

Carl was one of the most talented persons I have met. He was born in 1936 and graduated from Wheaton College in Wheaton, Illinois with a bachelor's of science degree in chemistry minoring in geology. He earned several postgraduate degrees. As an officer in the US Army he experienced many different assignments, finally as a military attache in London and Stockholm. After having retired he could use more of his time to conduct research in the sphere of history (not just military) and not least in Nordic WWII history.

To me and my co-author Lennart Westberg, Carl will always be in our memories as a cheerful friend and fellow WWII researcher. Without Carl it is most doubtful if there would exist an English version of Swedes at War 1914-1945. Therefore it was a good moment in the midst of my sadness when I learnt from Carl´s wonderful wife, Joanne, that Carl in spite of his illness was able to read our sequel to that book shortly before he died.

Carl provided lots of documentation from US archives, proving the extent of Sweden´s covert and even today not fully known support for Allied WWII operations. His research work is part of two of my books and one can also see traces of Carl´s work inside two of the still standing Sepals bases here in Swedish Lapland. Thank you, Carl, for all your support and for making us glad so many times.
created by Lars Gyllenhaal at 21:48 2 comments: