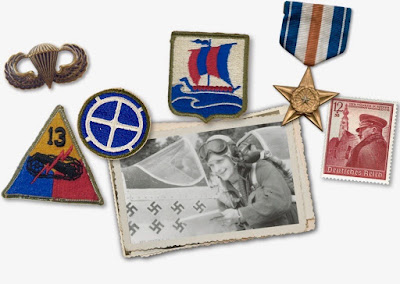 My new book does not portray in detail all the 4,000+ men and women born in Sweden who joined various US units. That would have required several more years of work and presenting the results would demand many volumes. But what about their motives, were they not “just” in US uniform because they had emigrated from Sweden? Well, as my book shows, not all were emigrants, many were Swedish sailors. In addition there were those many, many soldiers who had been born in the United States but who nevertheless were called Swedes because of their Swedish parents, grandparents etc. Well, in my new book I portray a dozen of the many thousand more or less Swedish men and women in US uniforms, with all their military details and photographs. It has so far sold really well in Swedish, hopefully it can be translated in the not too distant future.
created by Lars Gyllenhaal at 16:32 No comments: 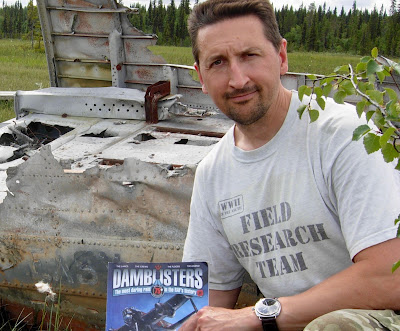 This summer´s WWII field research tour to Narvik and Setermoen included some nice stops also in northernmost Sweden, as we have some rather remarkable traces of WWII also on Swedish soil, not least the remains of a 617 Squadron "Dambusters" Lancaster and a German Ju 52 with paratroopers.

Although we, the expedition members, had been to these places before, we hoped that we might be able to find some new traces from the war years. And so we did, both by hiking and visiting museums. Here follow some of the highlights IMHO. Well, our first stop was the privately owned Tractor Museum in Svartbyn outside Överkalix (not to be confused with the many other Svartbyns), better known as Holgers traktormuseum. It is, of course, mainly a tractor museum, but it does have some military vehicles and, since a few weeks ago, also a propeller from a Heinkel He 111 bomber aircraft (donated to the museum after our trip). Let me also stress that this is an informal museum, more of a private collection. For current opening hours etc you will have to search the web. 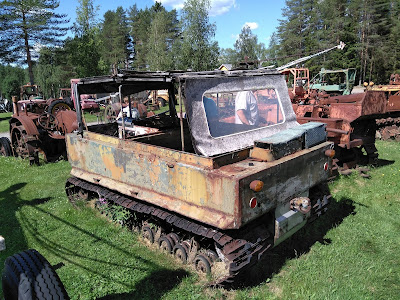 Holger´s M29 Weasel is, like his tractors, preserved outdoors - but functioning.

What I find so fascinating about the M29 Weasel is that its father was the British inventor Geoffrey Pyke, as a result of the early and abandoned idea to attack German forces in Norway by conducting massive raids with elite forces using new snow equipment. One of the units earmarked for these operations was the US 99th "Viking" Infantry Battalion, that I have written about quite extensively in my latest book (Svenskar i strid mot Hitler) as it contained not only Norwegians and Norwegian-Americans but also some Swedes and Swedish-Americans.

My fist ever trip to Normandy was in 1984 on a GMC. Some friends and I went to the 40th anniversary of D-Day, and to do this we lived as inexpensively as possible, on the truck. Holger´s GMC thus brought back many memories. 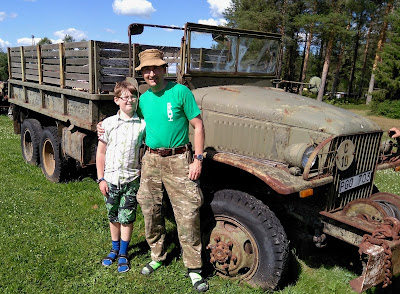 This was my mobile home in Normandy, June 1984.

Aside from these WWII vehicles Holger also has i.a. an odd British 1950s (?) tracked vehicle from the Atkinson Hacker Tractor Company Ltd. that seems to be based on a tankette - but I have not been able to figure out which tankette it might be. Please do comment if you happen to know the answer. 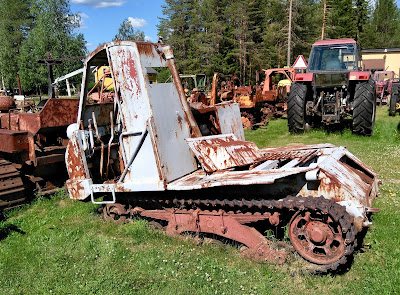 The tracked vehicle from the Atkinson Hacker Tractor Company Ltd.

Then we briefly stopped in Kiruna to i.a. check out a non-public diorama there, depicting the German battleship Tirpitz shortly before it was attacked by British X-craft midget submarines. Click the below photos to see them in larger size. 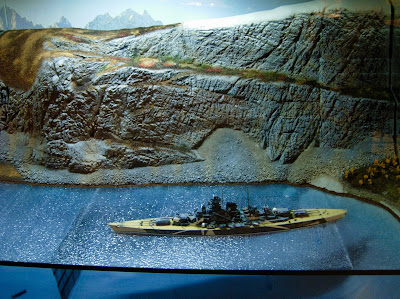 Note the anti-submarine nets and the X-craft lurking in the lower left corner. 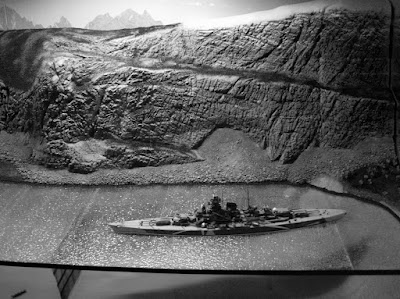 To see how realistic this diorama is, check it out without colour.

After Kiruna we drove to the border and hiked from the Norwegian village of Björnfjell to the Rombak fjord, walking along the old navvy trail - yes, it is spelt navvy and it means manual labourer working on a major civil engineering project, in this case the incredible railway stretch between Kiruna and Narvik. As you can see, we had great weather conditions, in fact it was almost a bit too warm. 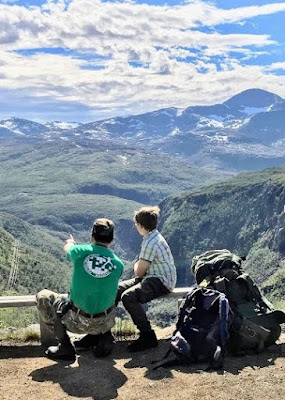 Hiking on the navvy trail on a day like this is just awesome. PHOTO: Mikael Norman

My son Jarl discovered something quite amazing by the Katterat railway station. We had on a previous trip seen that the easternmost building still has marks from an attack with British aircraft (Swordfish, if I recall correctly). Well, Jarl pointed out some bullet holes in a mast close to the wall with the marks. How could we have missed that mast? 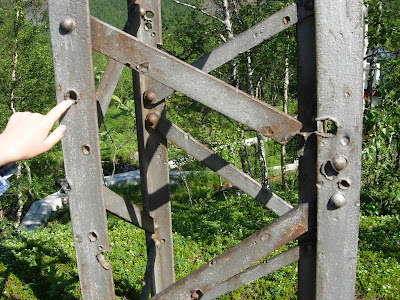 Jarl pointing out the bullet holes we had missed on our previous visit. 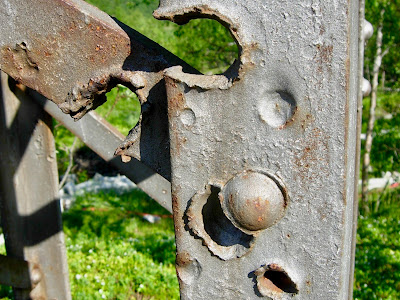 A closer look at the holes, probably caused by a British attack in April-May 1940.

After having hiked for two days and enjoyed the Rombaksfjord all to ourselves (no other tents in spite of superb weather), we took a train back to Björnfjell railway station and then drove to the Troms Defense Museum in Setermoen. Remember, you can click the below photos to see them in larger size. 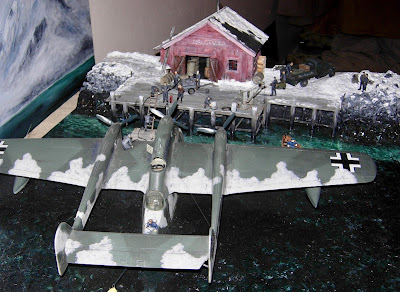 The museum in Setermoen differs from the Narvik War Museum. Both are very worthwhile seeing, but for the military vehicle enthusiast the Troms Defense Museum in Setermoen has much more to offer, and it deals with older times as well as Norway´s more recent defense history. Setermoen also covers the war in Norway after the battle of Narvik, including the Allied special operations in the area, conducted from bases on Swedish soil, e.g. the "Kari" and "Sepals" bases. 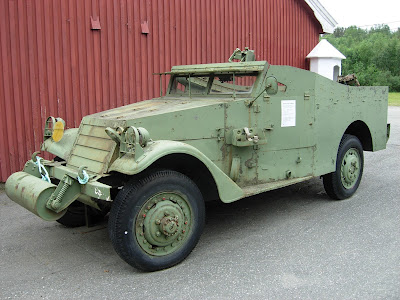 Scout Car used also postwar for many decades by the Norwegian Armed Forces. 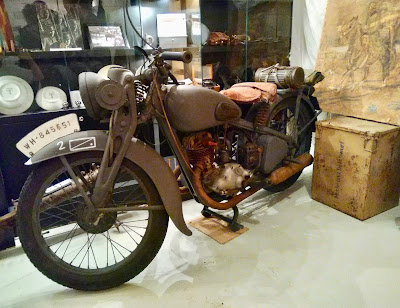 The Troms Defense Museum offers visitors the chance to study WWII up close. 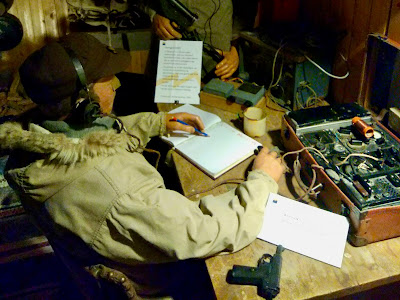 Full size diorama of the inside of an Allied special operations base in Sweden. 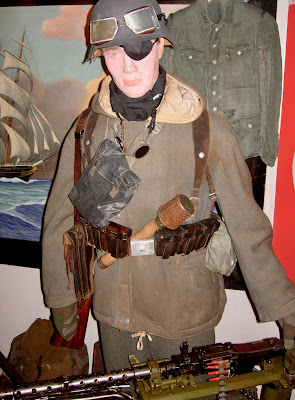 German occupation soldier in Norway after 1940, with a MG 34 machine gun. 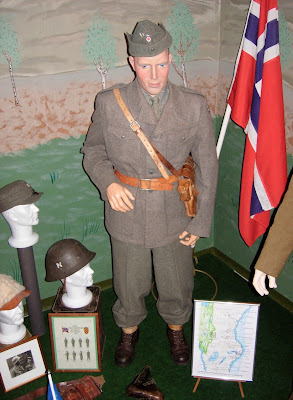 Norwegian "police trooper" from the Norwegian forces in Sweden 1943-45. 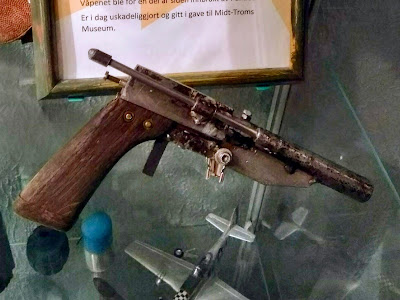 A 1-shot gun made in a German POW camp, probably by Soviet POWs.

The above photographs show only a fraction of the equipment and vehicles on display in Setermoen. Speaking of military vehicles I was very happy to receive a copy of MUD & SNOW, the journal of HMK, the Norwegian MV buff club. I was just astounded by the restoration of a 1917 T-Ford ambulance and a Hotchkiss H-39 tank. The latter was a simply horrible wreck but is gradually being restored. From Setermoen we drove into Narvik town, revisited the Narvik War Museum and had a great dinner in the sun at the fish restaurant by the main town square.

Back in Sweden, but within sight of Norway, we revisited the remains of the German Junkers Ju 52 with paratroopers that was shot down over Sweden by Swedish AA-gunners on June 2, 1940. I have visited this site many times before, but once in a while we see parts or personal gear that we have not seen before. This time we happened to find a piece of wreckage with German writing on it, something none of us had seen there before. 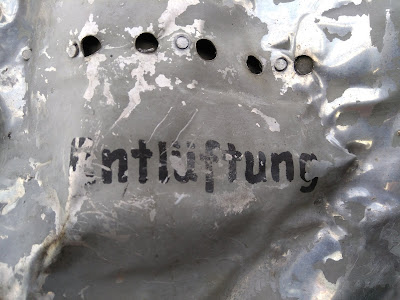 "Entlüftung" means the "out" part of the ventilation. 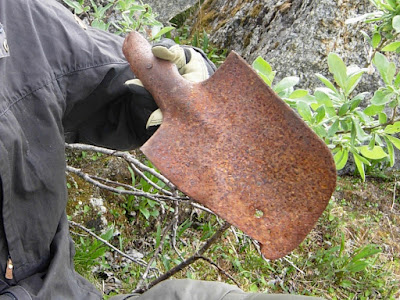 An entrenching tool among the wreckage. Presumably from one of the paras.

As with the next plane we visited, we took nothing away from the Ju 52, and hope future visitors show the same respect.

The remains of the Lancaster "Easy Elsie" of "Dambuster" squadron fame are located a few kilometers outside the Swedish village of Porjus in the municipality of Jokkmokk. 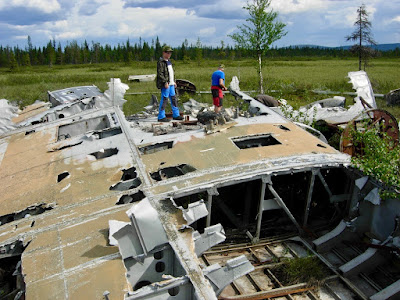 "Elsie" is missing engines etc but has parts that are not visible in museums. 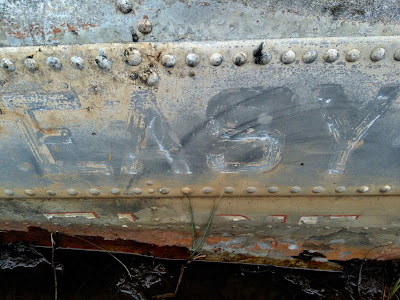 Yes, after all these years you can still see "EASY", but "ELSIE" has faded away. 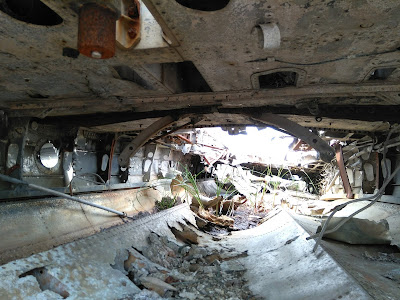 Might this be the last remaining mechanism for the "Tall Boy" bomb?

The single bomb that "Easy Elsie" carried was a "Tall Boy", the second biggest bomb type used during WWII. The most famous use resulted in the sinking of the German battleship Tirpitz. But to achieve this, 77 "Tall Boys" had to be dropped, in three attacks.

Having visited the remains of "Easy Elsie" one might want to have lunch or dinner. Well, we can warmly recommend the new restaurant/cafe in Porjus: Arctic Colors, that also offers accommodation. Delicious reindeer and elk burgers and much more! Plus the place is run by a gentleman whose father belonged to the Dambuster squadron.

Our final stop was a flea market/cafe outside Gunnarsbyn (municipality of Boden), where I just happened to notice the below item, for sale for 30 Swedish Crowns. I had a hunch (seeing "DRGM" on it) that it might be something from WWI or WWII, so I bought it. 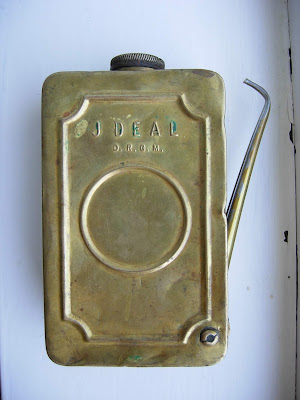 Back home I discovered it was a German oil can for machine guns, and it was still in good shape. It may well have come to Nestors Cafe via a downed German aircraft.
created by Lars Gyllenhaal at 17:29 4 comments: