Making of "The Victors" in Sweden

This is how "The Victors" starts.

I am proud to have contributed to the latest issue of my favourite British journal, After the Battle. More precisely to the Swedish part of the amazing making-of story "The Victors" by Trevor Popple.

The story is about Carl Foreman's directorial debut, the quite controversial WWII movie "The Victors". Foreman is much better known for his scripts for "High Noon" and "The Bridge on the River Kwai". "The Victors" was an attempt at portraying the US Army in WWII Europe in a highly realistic way. GIs are shown worn out by battle and sometimes even cruel. The movie is still very much worth seeing and in some ways, I believe, is more realistic than many recent WWII movies.

This fall it is exactly 50 years since the movie was first released. For Swedes it is of particular interest as the winter scenes were filmed in Sweden, in the province of Jämtland. That is of course where I provided some small services to Trevor Poppple, who has put amazing amounts of research into the article and describes not only the filming, including memories of the living Swedish extras, but also shows what the sites of the production are like today.

Trailer for the Russian TV-series SMERSH with English subs!

SMERSH, from SMERt' SHpionam meaning spies must die, is my fav Russian acronym. If we get a new cat I may even suggest we name it SMERSH...
created by Lars Gyllenhaal at 10:49 No comments: 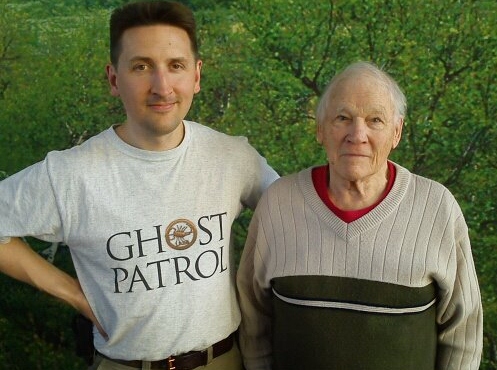 Had a good time yesterday talking about Ghost Patrol at the Defence Museum in Boden. It was especially nice to see a WWII Lapland ranger veteran in the auditorium, Sten Losenborg (see above). At the lecture I showed photos, some genuine WWII desert gear, answered questions and made an announcement that I will now repeat.

My co-author Karl-Gunnar Norén and I are proud to announce that we have taken a first step in selling language rights for Ghost Patrol abroad. In which language Ghost Patrol will appear first is a bit too early to announce but in due time there will be more details here. As for now, have a look at this new LRDG expedition video produced by Toby Savage: