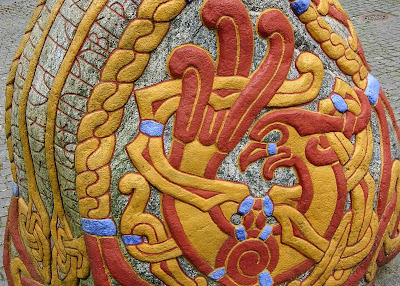 created by Lars Gyllenhaal at 20:05 No comments:

From Geopolitics To The Ghost Patrol 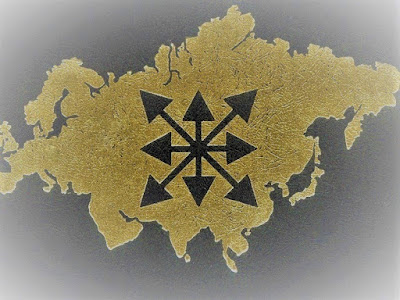 Eurasianism as depicted on the cover of "The Foundations of Geopolitics".

In 2017 the world´s attention was on several occasions focused on the Korean Peninsula and many feared some kind of war there. But there was no new major violence in 2017. Instead, the ISIS/Daesh terror cult experienced major losses. Will we be so fortunate in 2018? This is my quick review of 2017 - from global to personal - plus some words about 2018.

As I write this blog post there are ominous signals coming from Asia. Sadly, there are more hotspots there than the Korean Peninsula. This does not mean there has to be a new Asian war in 2018, there have been several really bad signs before and no war. Still, the risk for a new war in Asia is IMHO more tangible than, say, five years ago. One might also say that there is an ongoing, slow, war taking place inside North Korea, the persecution of a very large number of North Korean citizens.

In Europe, the year 2017 meant no major change to the Kremlin´s unfinished war against Ukraine - meaning e.g. that, again, more people were killed there by anti-vehicle mines than in any other place, according to this SIPRI report. So far, there is no strong indication where the war is going, but the coming presidential election in Russia, with the first round on 18 March, might provide such an indication. Regarding the presidential candidates aside from Vladimir Putin, Alexei Navalny is not allowed to run and the two major contenders are right now thus Vladimir Zhirinovsky and Pavel Grudinin. Zhirinovsky has threatened the Baltic states and claimed that many in Finland desire that their country again be part of Russia. I heard the latter from the man himself, as I have interviewed him face to face. Nevertheless, Mr. Zhirinovsky, who also happens to be a Russian Army colonel, has been decorated several times by both Presidents Putin and Medvedev.

Finally, in 2017, a book appeared in Swedish about the ideology that since about 1997 has been the rising star among the Moscow security elite, Eurasianism. Like the 2016 English book Black Wind, White Snow by Charles Clover, the new Swedish book, Vi och dom by Bengt Jangfeldt, provides a highly readable history of Eurasianism. It describes, for instance, how one of the 20th century founders of this ideology, Prince Nikolai Trubetzkoy, in the end renounced his Eurasianism. Strangely, this did not stop the resurgence of the Eurasian movement in conjunction with the fall of the Soviet Union, and the first new Eurasian handbook, The Foundations of Geopolitics, has had, to quote Bengt Jangfeldt: "[...] more significance for the ideological development in Russia than any other political publication published after the fall of the Soviet Union".

Considering what is said in The Foundations of Geopolitics (written with the explicit support of a Russian general) about Finland and the Finnish-Swedish border in the section "The Finnish Question", Eurasianism is an ideology that should have been discussed here many years ago. Yet it is only now that this discussion is perhaps emerging.

Now, moving to the personal level, some highlights from my 2017. Aside from several smaller articles I was able to conduct the necessary research in Stockholm for two large articles about the discoveries in 1987 and 1988 of Eastern Bloc explosives and weapons beside one of the largest fuel depots in the country and not far from the main Swedish airport of Arlanda. The articles are based on several different Swedish, German, Austrian, Ukrainian, Russian and British sources, not least documents from the East German Stasi, proving e.g. that the terrorist group that had planted the weapons cache by Arlanda had not only received financing and shelter from the Stasi but also training from its special forces group AGM/S. In the course of my investigation in the field, supported by a good friend, I was able to visit the location of the Arlanda weapons cache and take a series of then-and-now photos and establish the distance between the forest cache and the airport, five kilometres.

Speaking of special forces, I had the pleasure of working together with Finnish military historian Mika Kulju, to also establish on the actual spot, the physical evidence from an Allied base on Swedish soil 1944-45 used for intelligence work against the German forces passing on the other side of the border, in Finnish Lapland. The first physical evidence from this base I was given about a year ago, by Gunnar Isberg, who took part in founding the very first Allied base in Sweden, "Kari", in 1943. It was a pair of US Army snow goggles that since a few weeks are preserved by the Norrbotten Museum in Luleå. These goggles were used by the SOE-trained Norwegian soldiers that lived in the Allied "Sepals" bases on Swedish soil 1944-45.

What Mika Kulju and I found was pretty amazing and forms part of Mika´s latest book, Käsivarren sota - the cover is here below. You will have to wait a year or so until I can write my book relating our findings. 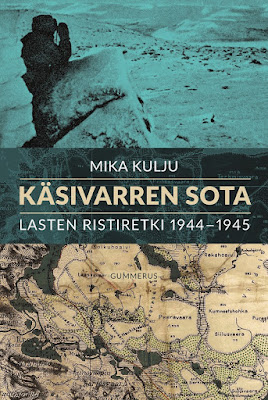 Finally, 2017 was also the year when I finished working on the translation of Spökpatrullen, meaning "The Ghost Patrol", that was published in Swedish in 2012 and written by Karl-Gunnar Norén and yours truly. The book both tells the story of the WWII Long Range Desert Group and what it takes to today find remains of their special vehicles and equipment, still out there in the Egyptian desert. Of course, Karl-Gunnar got to these very remote locations by driving an original 1943 jeep. While nothing can yet be said about its publication I can recommend you to right now open Spotify and type: Long Range Desert Group. It was my greatest pleasure in 2017 to be part of the team behind this song, led by the Swedish musician and artist Tore Berger.

created by Lars Gyllenhaal at 17:36 No comments: