A Deniable Operation Under The Swedish Flag 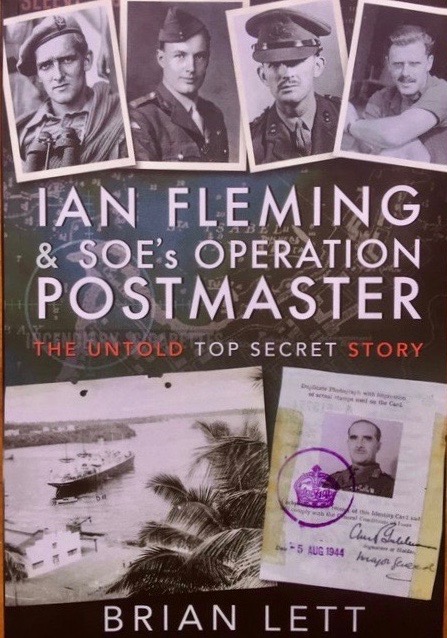 The story they presented was that they were a neutral Swedish crew on a neutral Swedish yacht. In fact, they were a group of SOE agents on an incredibly daring mission, commanded by an actual "M", with whom Ian Fleming worked. This is a book that especially Nordic SOE, SAS & Fleming/Bond buffs can appreciate.

While the Swedish flag was mere camouflage, there were actually Danes aboard, one of whom later would join the SAS and earn a VC, Anders Lassen. Thus it should already be apparent that Ian Fleming & SOE´s Operation Postmaster by Brian Lett is of special interest to Danish military history buffs. Norwegian WWII buffs also have several reasons to pick up this book, because Brigadier Colin Gubbins was "M" and he had a great deal to do with Norway from 1940.

Well, what kind of special operation is Ian Fleming & SOE´s Operation Postmaster about? In 1941 the British started receiving reports that German submarines were using rivers in French parts of Africa for refuelling. At the time, the Special Operations Executive (SOE) was a new outfit with many enemies, not just among the enemy. The SOE had to prove its worth. The cunning plan was to sail a "Swedish" SOE ship, with some great characters, to West Africa and locate German submarine bases. But having arrived in the area the main aim became to steal enemy ships from a neutral Spanish port on the volcanic island of Fernando Po. I will here not give away the wonderful story of what happened but just say that the British Government lied in order to conceal British responsibility for the operation, and basically recommend that you read this book yourself.

Being the author that I am, I do not think that the characterization of Sweden as "pro-German" in Lett´s book is fair. Regardless if one means the Swedish state or the majority of the Swedish people, the largest Swedish sympathies were about Finland, Norway and Denmark. Yes, there were Swedish Nazis and pro-German sympathies, but they never dominated. The thousands of Swedish citizens in Finnish, US and Norwegian service can be compared with the 200 in various German units. For more about Sweden during WWII please turn to e.g. John Gilmour or yours truly.

Nevertheless, Brian Lett´s book is an inspiring and exciting book that should please not just SOE and Fleming/Bond buffs. First published in 2012, the edition I got is from last year. Brian Lett has written other books about special ops and I just recently became aware of his SOE`s Mastermind - Sir Colin Gubbins, a book that I very much look forward to reading.
created by Lars Gyllenhaal at 10:57 No comments: