On May 28 Narvik will receive 400 guests of honour to commemorate the 70th anniversary of the battle of Narvik. Among the guests from six nations including Poland and Germany there will be quite a few veterans including the last Swedish Narvik veteran known to be alive.

What happened specifically on May 28 1940 was that Norwegian and French troops (including half a dozen Swedish volunteers) made an amphibious landing just NE of Narvik and reclaimed the town. Although they then didn´t hold the town for long what happened on May 28 can still be considered a significant first as it was the first successful, large Allied operation against the German Wehrmacht. The coming event will honour both the participants of the May 28 landing and of the whole battle of Narvik, that lasted from April 9 to June 8 1940.

There were a dozen Swedish volunteers who fought for Norway and France in the battle for Narvik. Eight Swedes, of which six have been identified, fought in the Norwegian infantry regiments IR 14, 15 and 16. In addition, four Swedes fought in the ranks of the French Foreign Legion´s 13 DBLE.

There will be fly pasts, visiting war ships, restored WWII military vehicles, bands playing and many ceremonies. I will be there too and will document it all and meet some of you who are reading this! Here is the programme, albeit in Norwegian only.
created by Lars Gyllenhaal at 09:36 No comments:

Today a complete Bf 109 German fighter emerged from the sea off the coast of central Norway. Here you can see photos of it just after having emerged and also a video of it while still submerged.
created by Lars Gyllenhaal at 21:21 No comments:

Those of you who already have a copy of Swedes at War know that the first Swedish war participants of the world war era were the Swedes in Persia. The new Disney action-adventure Prince of Persia opens, like Swedes at War, with a mini-lesson about the former size and might of Persia.

After that factual opening the movie enters into a spectacular tale (it has a touch of Star Wars) that has less to do with Persia´s (i.e. Iran´s) actual history. But, hey, Prince of Persia is not being touted as a documentary. Still, I reckon that if you love history you are extra likely to enjoy PoP. What´s more it contains some witty references to recent war history. My favourite is probably when the assassin squad hunting for my American relative is defined as a "secret government killing activity".

I hugely enjoyed watching Prince of Persia and thank Jake and Disney for making it easier to operate with a weird family name like ours:

Some years ago it was so bad that I would even call myself Larson, Ericson or whatever when ordering tables at restaurants. It was such a time-consuming ritual to try to communicate our family name. Thanks to Jake and Maggie life is a bit easier for us now.

Of course, outside Sweden the spelling, and even more the pronounciation, is still a challenge - as the above video demonstrates. Jake knows very well, though, that that is not the original pronounciation - I suppose he was inspired to say what he did from having watched the Swedish chef in the Muppet Show.

It seems film reviewers didn´t quite expect Jake to fit so well into the role of a warrior prince. Well, considering his Royal Swedish blood + blue British blood (could that explain the realistic British accent? Nah, just kidding) and the long connection between Gyllenhaals and various wars (Jake´s own grandfather survived at the tip of Patton´s spearhead) it is perhaps not that surprising. The first half of our name is actually a reward for service in the Thirty Years´ War.

P.S.
Pretty ironic that the baddest bad guy of PoP, the leader of the Hassansins (the elite assassins, better known as Hashshashin) like Jake IRL is a Viking. In fact, he is more Viking than Jake, as he is from Iceland, the most Viking place there is nowadays. His name is Gisli Örn Gardarsson. And speaking of örn, which means eagle, Alamut, the fabulous fortress that is central to the movie, is Persian for "Eagle´s Nest".
created by Lars Gyllenhaal at 21:58 No comments:

Email ThisBlogThis!Share to TwitterShare to FacebookShare to Pinterest
Labels: Persia

Behind Swedes at War

This is where I will write about the books I have written; books I am writing and books by others. In addition I will sometimes review movies and comment on current events.

My main themes are modern wars with Swedish participants and WWII in the Arctic.

I am the author of Swedes at War published by the Aberjona Press in 2010, that I wrote together with Lennart Westberg. I have written four more books, but they are in Swedish. Eventually, more books in English will follow.

Last week I was in Stockholm and i.a. celebrated the release of Swedes at War with my parents, co-author and the book´s translator, Carl Finstrom. After the dinner my dad took this photo of us. From left to right: Carl Finstrom, me and Lennart Westberg. 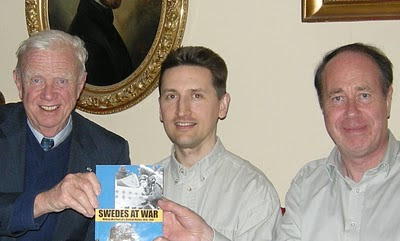 We are glad to be able to say that the pilot on our book´s cover, William Yngve Anderson born in Kramfors in 1921, is still alive. Come back and I´ll tell you more about him - more than there is in the book. Recently there have also been some amazing developments around a group of Swedish volunteers for Finland - a story so new it is also not in the book.

Please do comment if you have any suggestions or additional information. Communicating with readers is not just a pleasure but often improves future book editions or leads to new discoveries/insights. Just remember that comments are not published automatically as I wish to remove spam.
created by Lars Gyllenhaal at 23:17 6 comments: