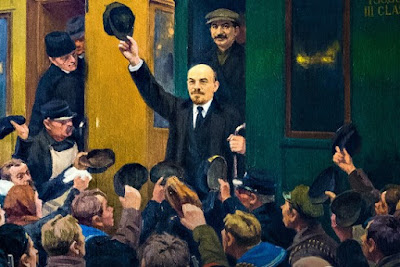 Fake history on the cover, Stalin was not part of Lenin´s homecoming via Sweden.

As a student in Soviet Moscow 1991 I daily passed a giant Lenin poster in the entrance of our dormitory. Until one day it had just vanished. Previously, I had seen the spot-turned-into-a-monument in Stockholm where he was photographed in 1917. It is now 100 years since he was standing on that spot, on his way to revolutionary Russia.

The train trip that Vladimir Lenin made from his long exile in Switzerland to the epicenter of Russian politics in Petrograd (the former and later Saint Petersburg) is now on my mind both for historic and current reasons. One is tempted to call what Germany did, making that trip happen, an act of hybrid war against Russia. Going a step further one might say that the modern Kremlin has recently itself come to practice the German idea of helping Lenin. But not just helping one Lenin, but a bunch of "Lenins" in several countries, thus increasing the stress not only on targeted states but also on selected alliances.

Catherine Merridale's recent book Lenin on the Train makes Lenin's 1917 journey to Petrograd's Finland Station come alive, and it has now also appeared in Swedish and I have therefore reviewed it in my native language. Apparently, it has come out in English with two different covers. I must say that the one also used for the Swedish version is superior to the modernistic one. Not least because it contains a "beautiful" example of fake history standing right behind Lenin - Stalin was not on that train.

I have previously blogged in English about Lenin monuments in Sweden, like the one in Stockholm that is all about his physical presence in Stockholm on April 13, 1917. The next day he arrived at a train station not far from where I am writing these words, the one in Boden - that unlike the Stockholm station has retained very much of its outer appearance. From Boden Lenin did not have to travel long to reach Russia, as at the time the border town of Tornio in north Finland was still part of the former Russian Empire, since a few weeks called the Russian republic.

Freedom Is Not Free 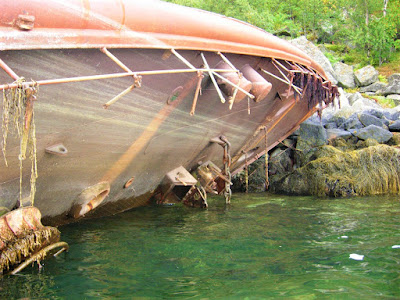 The destroyer "Georg Thiele", part of the task force sent to Narvik - where she still is.

On April 9, 1940 both Denmark and Norway were invaded by Germany. Until last year there were more than a dozen defenders of Norway 1940 still alive, such as Swedish volunteer Jan Danielsen. This year Jan is no longer around and soon this major event in Nordic history will have no living witnesses.

Being with Jan and listening to him was something really special, he was simply a wonderful person that inspired me with his vitality and ideas. He didn´t have to say things like "freedom is not free" - he had lived those words.

All in all some 300 Swedes went over to Norway in 1940, all to join the Norwegian Army and none to fight for Germany. There would have been many more if the Swedish government had not suppressed this volunteer movement. There were hundreds, if not some thousands, in the just disbanded Swedish Volunteer Corps for Finland that Jan had also been in, that were eager to also fight for Norway. But the Swedish government basically stopped this from happening. 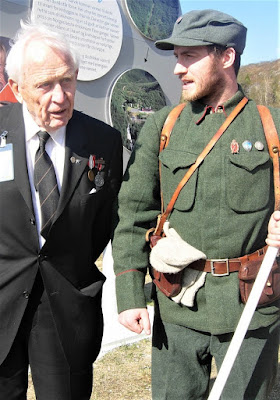 Thanks to veterans like Jan I have come to better understand how rich with possibilities life is, and how very small most of my "problems" actually are. 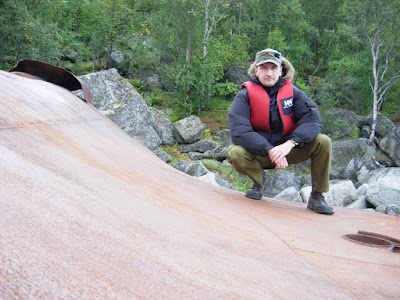 Me onboard "Georg Thiele". The life vest is because I went there by a small boat.
created by Lars Gyllenhaal at 17:15 No comments:

Having lived in Stockholm and with family & at least one friend very close to today´s attack, it is with an unreal feeling I am writing this. But instead of just being angry I decided to write down how I perceive the attack and what I feel must be done.

A truck was driven into a crowd in central Stockholm, killing at least four and wounding about 15. The similarity to the recent terrorist attacks with vehicles in Germany, France and the UK is obvious. But what may be just as telling is that the truck came to a bloody halt only about 100 meters from the spot where a suicide bomber attacked in 2010, miraculously only killing himself. His name was Taimour Abdulwahab al-Abdaly and he was a Swedish citizen. According to the FBI, his bombing could have killed 30 to 40 people.

However, the 2010 Stockholm bombing was far from the first sign. In fact, the first Swedish citizen to die for the sake of jihad did so in 1993. Yes, 24 years ago. His name was Mikael Glinka and I have written about him. Since then several hundred Swedish citizens have joined jihadist groups. Now, the (main) killer in today´s mass murder may not have been a Swedish citizen, but the problem then still is jihadism in Sweden. It is simply appalling how only last year Swedish legislation began to catch up with reality, and how top Swedish terrorism experts (I am not one of them) have long been largely ignored. This slow pace and ignorance is lethal. It has to stop.

created by Lars Gyllenhaal at 23:52 No comments: