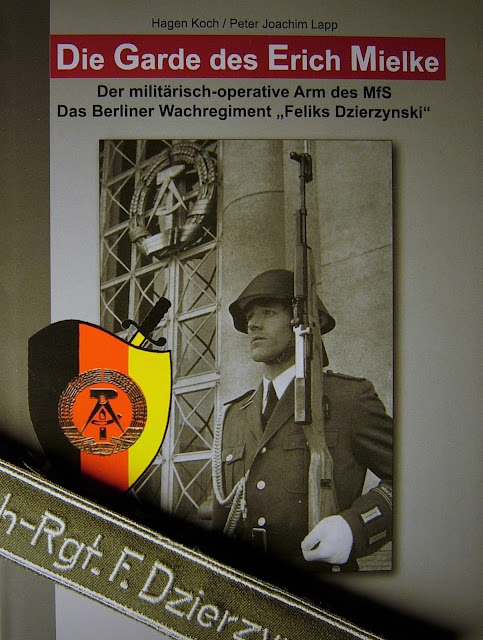 One of the best sources about GDR (DDR) elite units and a cuff title for "Dzerzhinsky".

There is a lot of praise out there for the German television series "Deutschland 83" about a 24-year-old native of East Germany (GDR/DDR) who in 1983 is sent to the West as a spy for the Stasi, the East German KGB. The series has been exported to several countries and is now being shown in my native Sweden.

Evidently, a lot of people find the series very entertaining, see e.g. the Wikipedia page about it. Yes, the series does bring back a lot of 80s atmosphere - it has the "perfect" look and soundtrack. However, yours truly just can´t help thinking that here a major opportunity was missed to do better than just entertain, because I find it to be mainly amusement. It contains so many deviations from what happened in 1983 that I don´t know where to start pointing out unrealistic or simply wrong details. In short, I would say that what has been accomplished is a German series too inspired by "The Americans", the US show about undercover KGB spies, and pure fiction like "Mission Impossible".

Of course, a "Deutschland 83" more based on reality would have risked not being as commercially successful. But, I imagine that with another script and/or director we could have seen something like the excellent Stasi drama "The Lives of Others".

Anyway, if "Deutschland 83" has sparked your interest in the Stasi (officially Ministerium für Staatssicherheit, MfS) and its elite soldiers - then I have a source for you. Alas in German, but if you are really interested then you probably understand German. The source is Die Garde des Erich Mielke (The Guard of Erich Mielke) by Hagen Koch & Peter Joachim Lapp. It mainly tells the story - with many photographs - of the Stasi´s Guards Regiment "Feliks E. Dzierzynski", named after the founder of the Soviet Cheka/KGB, Felix Dzerzhinsky. But also shows how this large regiment (actually more of a brigade) was connected to East German SOF units like the ultra-secret AGM/S.

BTW, one of the under-reported news stories in 2014 was how the prestige formation of the Russian VV-troops (Internal Troops) got back its name and is thus since September 2014 again officially known as the Dzherzhinsky Division.

I warmly welcome tips from readers re books about East German elite units in other languages than German.
created by Lars Gyllenhaal at 18:35 3 comments:

I can´t recall having seen a single Finnish movie about the Lapland War of 1944 between Finland and Germany - although one famous war movie was partially made in Finnish Lapland, see my previous post about the 1993 version of "Stalingrad". But last fall such a movie premiered in Finland, entitled "Wildeye" in English.

As it has been filmed in areas where I have hiked several times I am very anxious to see this film. However, due to the lack of "film contact" between Finland and my native Sweden I guess I will have to wait for the DVD to see this one. The only other movie I can recall that deals with the Lapland War of 1944 is the 2002 Russian film "The Cuckoo".

My last post here in 2015 was about how the Lapland War is being described in new ways in Finland, e.g. in the Rovaniemi exhibition "We were friends".
created by Lars Gyllenhaal at 11:45 No comments: