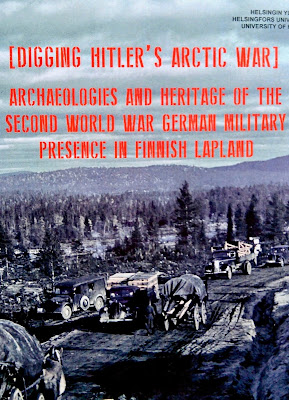 Focusing on the German Wehrmacht and SS presence in Finnish Lapland.

There has never been a more dramatic part in Finnish Lapland´s history than the war years, but not that much has been written in English about this area during WWII. Even less about what remains to be seen there from the war.

Well, now there is a book in English, released some months ago, focusing precisely on these matters, Digging Hitler´s Arctic War by archeologist and geographer Oula Seitsonen. It contains a lot of information unknown to non-Finnish speakers and also some very interesting photographs and maps. However, let me immediately state that it is an academic dissertation, and thus has a looong subtitle, Archeologies and Heritage of the Second World War German Military Presence in Finnish Lapland. Also, the book has a very long introduction and some other parts that could have been more edited. But, bearing in mind that this is a dissertation, the length is motivated and one can very simply skip some introductory pages. However, do not miss the first part of the introduction, because it starts with an amazing conversation between the author and an old Sami man, that took place by the former headquarters of several German-run POW and forced labour camps. In fact, Hitler´s chief architect Albert Speer once visited the place personally.

It soon becomes obvious that the book ties in nicely with an earlier blog post of mine, about “Wir waren Freunde” (“We were friends”), i.e. the most popular (and now closed) exhibition ever at the Provincial Museum of Finnish Lapland.

While you might expect from the subtitle that the book is mostly about the legacy of WWII in Finnish Lapland, it actually contains a rather long summary of events 1940-45. But not too long, and it is very informative. The quotes from Germans and Finns about each other (as soldiers) are well chosen.

Oula Seitsonen makes it very clear how much more than expected there is left of the German military presence in Finnish Lapland, not least in the form of German-run POW and forced labour camps. Officially some 9,000 prisoners (i.e. Soviet soldiers) were taken on the northern front. In addition the Germans “imported” to Finnish Lapland some 20,000 POWs and labourers and not only from Soviet areas but also from France, Norway, Poland and the Netherlands. Remains of these German camps sometimes are situated right next to modern “tourist traps” without a single sign pointing them out.

Seitsonen exemplifies what can be visited with greatest ease today by history buffs/tourists, i.e. the large German defensive positions “Sturmbock” and “Schutzwall” and he also presents some interesting ideas about using mobile phones and augmented reality to provide information/projections on historic sites.

One part in the book that could have been longer is when Seitsonen mentions the Soviet partisan-related sites.

If you have a special interest in Finnish Lapland during WWII, and especially if you do not speak Finnish, Digging Hitler´s Arctic War is a real must. If you wish to purchase a hard copy of the book, contact the author himself i.e. Oula Seitsonen: oula.seitsonen (at) gmail.com
created by Lars Gyllenhaal at 15:50 No comments: