The link between Raoul Wallenberg and the Office of Strategic Services (OSS) may have been the main reason for the way he was treated by Soviet state security (NKVD to KGB). For more about this view see Swedes at War.

Today historian Susanne Berger has an astounding article about Wallenberg in Sweden´s most important newspaper, Dagens Nyheter. Berger argues that Sweden needs to do more and Russia needs to declassify more: "We know crucial documentation is available, but we are not allowed to see it, nor do we get adequate official help from the Swedish government to obtain access to it."

Yes, there is an English version of Berger´s text. The Swedish text is not (yet) online.

Susanne Berger is a former consultant to the Swedish-Russian Working Group that investigated Wallenberg's fate in Russia from 1991-2001.
created by Lars Gyllenhaal at 12:52 No comments:

Guarding the Border in 1941 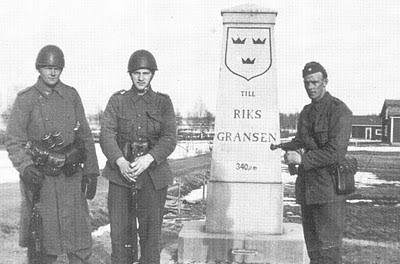 Here are three Swedish soldiers in 1941, guarding the Swedish-Finnish border by Haparanda. An image never before published, from the collection of fellow author Göran von Knorring.

No, the SMG is not a MP 40, its a Swedish one, but I am not quite sure which one. The hand grenades may look German, but are Swedish.

Does anyone know the exact spot? Surely that border marker is gone, or?
created by Lars Gyllenhaal at 19:25 4 comments:

Keith Bonn, Kit, thank you so very much for believing in the importance of translating Svenskar i krig (Swedes at War). I am so sad you did not live to see the review of Swedes at War in the January issue of Armchair General. An excerpt:

"Patricia Bonn, editor in chief for Aberjona Press, a company founded by the late Lieutenant Colonel (Ret.) Keith Bonn, has done military history enthusiasts a great service by publishing this English translation of Westberg and Gyllenhaal´s 2004 book Svenskar i krig 1914-1945."

Let me here just add that Swedes at War is a revised and slightly expanded version of the Swedish manuscript. There are also several new photos in the English-language version, and the size of the illustrations is generally larger.

Many thanks also to Patricia Bonn and the book´s translator, Carl Gustav Finstrom. The energy and amount of time you put into this project is astounding.

The Armchair General review of our book is not online, but this short recommendation is.

Meanwhile, in Sweden, our book has again become available from the largest online seller. It has been out of stock for months for some reason I do not understand.
created by Lars Gyllenhaal at 16:02 No comments:

Where might these words have been published in 1940? The source will probably surprise you. 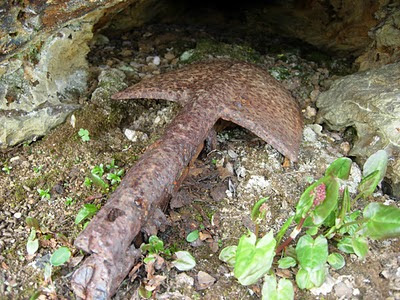 In addition, this Narvik Luger story of mine has also been published online by Armchair General.
created by Lars Gyllenhaal at 21:03 No comments: 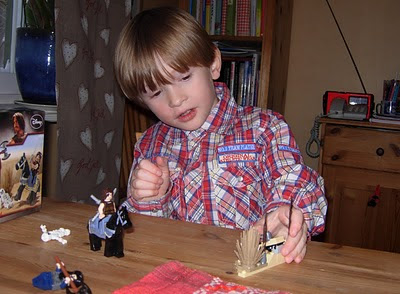 Jarl with his Lego version of Jake. The toothpick-thing is a desert bush/hiding-place for a treasure that Jake is supposed to find (or guard?).

It was great fun meeting several American relatives in their own country some years ago. Our son Jarl (4) is still a bit young for such major travel, but my father decided to unite the two Gyllenhaal family branches as a Christmas present.

Well, the way he did this was not that expensive, actually. He gave his grandson a Lego version of Jake as a Persian prince:

After a while Jarl asked the question: "but, how did our relative turn into a Lego figure?"
created by Lars Gyllenhaal at 21:52 2 comments:

The Forgotten Agents in Norwegian

I hear a Norwegian version of The Forgotten Agents by Anders Johansson will be published. Congratulations, Anders and all you Norwegians interested of Milorg, SOE and secret agents.
created by Lars Gyllenhaal at 21:34 1 comment: 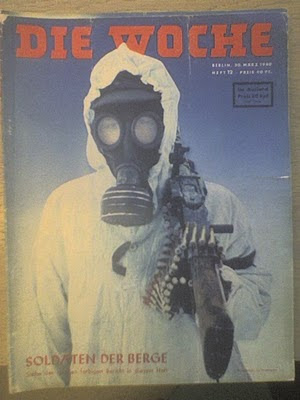 This issue was published on March 30, 1940, i.e. a week before the German invasion of Norway. By a mere coincidence (?) the cover story was "Soldiers of the Mountains", an article about German mountain infantry, Gebirgsjäger.
created by Lars Gyllenhaal at 20:20 No comments:

It is the first day of 2011. Many will ponder the fact that this year it will be exactly ten years since the September 11 attacks. Many remember exactly what they were doing on that 9-11. I remember too, although I am Swedish and was not in the United States at the time. However, in 2011 there are also good reasons to remember events of 70 years ago and to watch a prediction from 1981. 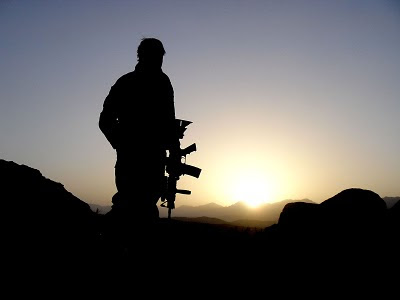 This photograph taken in Afghanistan in 2010 would not have been taken had it not been for what happened ten years ago. The soldier is from the Australian Special Operations Task Group and the photo was taken during the Shah Wali Kot offensive. PHOTO: Corporal Raymond Vance

The Japanese attack on Pearl Harbor, 70 years ago on the coming December 7, deserves to be widely remembered this year, and not just by Americans - the attack brought the United States not only directly into war against Japan but also against Hitler, through his declaration of war on the United States on December 11, 1941.

The Japanese attack was big news also in German-oocupied Eastern Europe, where a Russian boy was eagerly following world events. The boy, Roman Kravchenko-Berezhnoy, wrote in his secret diary on December 9, 1941, about Japan´s dim chance of success: "The navies of England, America, Australia and Holland are on one side, while Japan is on the other. Furthermore, hostile naval bases surround Japan. Besides, it is deeply involved in its war in China."

The secret wartime diary of Roman Kravchenko-Berezhnoy forms a major part of a book written by him some years ago: Victims, Victors: From Nazi Occupation to the Conquest of Germany as Seen by a Red Army Soldier. I am not neutral in relation to that book as I was one of its editors. Still, I believe it can be said quite objectively that Victims, Victors is a valuable book in any quest to understand the Russian WWII experience. Here is the book´s cover: 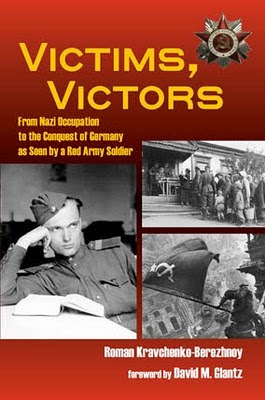 The sitting Red Army soldier on the cover is the author, who began the war as a news-hungry schoolboy, the son of a Tsarist officer, and who ended it as a submachinegunner and military interpreter.

How can I write "objectively"? Well, for example Walter Dunn wrote in Journal of Military History about it: "A remarkable document, casting light on events little understood. . . . Required reading for students of World War II and modern Russian history."

The monumental German-Soviet clash of 1941-45 - that on 22 June started exactly 70 years ago - is just a lot of places and dates for most people in the west. In the former Soviet Union, on the other hand, it is the defining moment of the previous century. Virtually everyone in what once was the Soviet Union has a personal relationship to WWII through the staggering Soviet losses, something like 27 million lives (both civilians and military).

Yes, the current estimate is about 27 million dead, which is exactly three times the total current population of my country, Sweden.

To somewhat understand Russia (or other states on former Soviet territory), studying WWII is simply essential. I also believe that especially the Red Army has long been a mystery to westerners for the lack of i.a. translated auto-biographies by Russian soldiers. Therefore I warmly recommend to those who have not read Victims, Victors to check out some more reviews.

Personally, one of the most fascinating things with Roman´s book I found to be how he tried to predict the future, and often succeeded. I guess this might have to do with my interest in movies about our near future. As you might already have guessed, "Terminator" is one of my favourites (the first and second, not the two latest). However, my number one is "Blade Runner". The year that has just begun happens to also be a special year for fans of that movie. On March 9 this year (2011) it will be 30 years since the principal photography of "Blade Runner" started. It ended four months later but was released only the following year (1982). In other words, watching "Blade Runner" this spring is watching a thirty year old vision of 2019.

I will not here compare what the movie is about with what we now almost know about the world in seven years. I just want to encourage you to see the movie (again). I especially recommend the 2007 version of the film, Ridley Scott's "final cut" version. Not least because of the documentaries on the DVD. It was while recently watching this DVD that I realized that there is a German Stahlhelm (steel helmet) also in "Blade Runner", in the home of J.F. Sebastian. It is worn by a small robot. I reckon it is a WWII helmet, made to look like it is from WWI. If you are into Stahlhelms in movies you might want to read my previous posts about this phenomenon.

P.S.
One of the most read posts I wrote during 2010 was this one about the Franciscan Waffen-SS soldier Gereon Goldmann. If you are wondering why I have since not written about that man and his story, you can be sure I will return to him in 2011. I read his book in German about a month ago and was so moved I decided to read it in English and Swedish too. Just the other day I got these books and I will soon start to read them and then do some research of my own. So, I reckon I will write about Goldmann again in March.
created by Lars Gyllenhaal at 09:09 No comments: