From the most impressive trailers I can understand the interest in the new German TV drama "Unsere Mütter, unsere Väter" (Our Mothers, Our Fathers) that is right now stirring up German interest in WWII and the Third Reich. 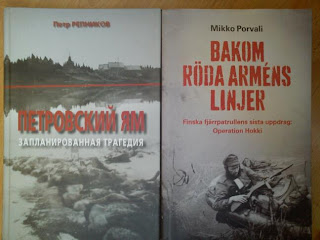 The long range patrolmen were the elite of the Finnish armed forces during WWII. The distances they crossed and other difficulties they overcame still today fascinate not only Finnish students of military history. Recently two books about them have been published outside Finland, with very different angles.

Operaatio Hokki (Operation Hokki) by Finnish author Mikko Porvali was published in Finnish in 2011 and in Swedish a few months ago as Bakom Röda arméns linjer (Behind the Lines of the Red Army). It is a detailed account of the last operation of the long range patrolmen, which was also Finland´s largest airborne operation. The book contains a great deal of new information and photographs from this little known operation.

Petrovsky Yam by Russian author Petr Repnikov is the most recent book about the patrols and is focused on another operation led by the same Ilmari Honkanen who was in command during Operation Hokki. Petr Repnikov presents a number of new documents and photographs about the in Finland most famous long range patrol raid against Petrovsky Yam. Repnikov proves that, aside from the supply depot and regular Red Army soldiers, the Finnish patrolmen also killed 28 medics and 9 of their patients in a hospital as well as 15 civilians. Repnikov criticizes Finnish historians for not having brought up this dark side of the famous raid. However, I would say that Repnikov incorrectly portrays Mikko Porvali, the author of the previously mentioned book. Porvali does in fact mention, on page 18 of the Swedish translation of his book, that also a Soviet hospital was attacked by the patrolmen. Porvali therefore considers the Petrovsky Yam raid only a partial success, pointing out how the attack against the hospital provided Soviet wartime propaganda with arguments.

But what about the awareness at the time, that is the awareness of the long range patrolmen? Could they, before the attack started, make out any red cross emblems in the February night? Here Repnikov and Porvali hold conflicting views.

The debate will continue when Petr Repnikov´s book will appear in Finnish, with comments by some Finnish historians. I understand this will happen in the near future.

Carl-Fredrik Geust, one of Finland´s most well-respected war historians, recently appeared in Russian local Karelian press about his view on Petrovsky Yam. His view is also not in Petr Repnikov´s book, but for a good reason. The book appeared before Geust´s visit and was in fact the reason for it. Well, Petrovsky Yam will no doubt continue to be debated.

created by Lars Gyllenhaal at 12:57 6 comments: 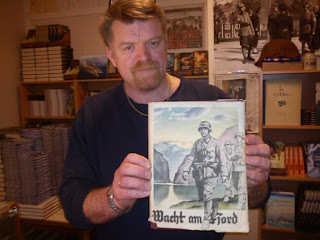 Trond with the book from 1941 that I had never seen before.

Thanks to guide work I got the opportunity to briefly visit Narvik yesterday, and thus I could for the first time visit Trond Kristiansen's military history book shop, which has recently moved to the main street of Narvik.

Trond could show me several amazing books that I had never even heard of before, like the above original wartime produced book Wacht am Fjord (Guard of the Fjord). Trond not only sells the interesting books that his publishing company produces, he sells all kinds of military history, new and old. His prices are usually the lowest in Norway. Plus you get to chat with Trond, who knows a great deal about the history of the Narvik area. Looking forward to my next visit because I did not have time to see more than a fraction of the books. 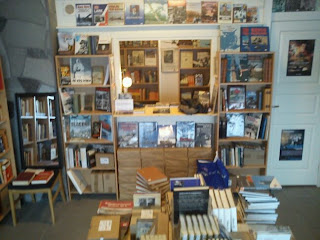 created by Lars Gyllenhaal at 16:25 No comments:

A clip from what could be called the first viking movie, the German "Die Niebelungen: Siegfried" (1924).

The Swedish directed (Johan Renck) TV drama "Vikings" has its premiere in Sweden today on HBO Nordic. Well, about time a Swedish director did something about the vikings.

Next year it will be 90 years since the first "viking movie" (sort of) was made, Fritz Lang´s "Die Niebelungen: Siegfried". Some scenes in that movie are said to have inspired one Mr. Hitler, or was it Albert Speer, or both of them? Perhaps scenes like the above one?

There have since been several American, British and three Icelandic films - the last of which was partly Swedish, it was called "The White Viking" (1991). But as far I know it is only now, with the new "Vikings", that a Swedish director, Johan Renck, has directed a viking story that is not a comedy (in 2010 the Swedish viking comedy "Sweaty Beards" was released). BTW "Vikings" is also starring a Swede, Gustaf Skarsgård as Floki. Skarsgård was most recently in the Oscar-nominated "Kon-Tiki" where he did a great job if you ask me.

Why did it take so long for us? There is a similar case with the wikings of the SS, that only in 2006 appeared in a Swedish film, "Frostbite". I have no clear answer, but sense that it may have something to do with the rarely discussed complex that until very recently made the more than 23,000 Swedish citizens who volunteered for or were drafted by other nations between 1914 and 1945 almost invisible, even in their home country.

No, I have not seen "Vikings" yet but I understand realism has not been a top priority. I find that a bit sad. Hopefully, someone out there feels the challenge to make the first realistic Swedish viking movie...

created by Lars Gyllenhaal at 12:00 No comments: