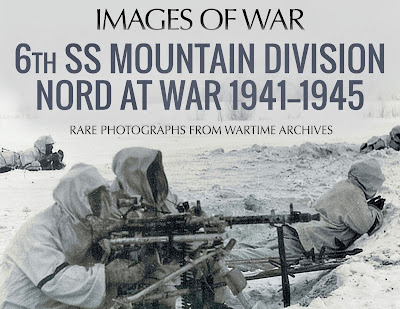 The only division of the Waffen-SS to fight by, partly above, the Arctic Circle was the 6th one. This meant that the division fought both in Finland and Norway and thus it is of particular interest to students of WWII in the Nordic countries. Here I will review the latest book about it, 6th SS Mountain Division Nord At War 1941-1945 by Ian Baxter.

This book, part of the Pen & Sword series "Images of War", is largely a collection of photographs. There is nothing wrong in that, as there have been quite many books published about this division, in particular if you count not only the English language ones. So, the idea of publishing a collection of photographs is a logical one. The book also largely lives up to the subtitle: Rare Photographs From Wartime Archives.

Not only individuals and groups of soldiers are depicted but also quite a few vehicles and one gets a feel for the landscapes of the Arctic.

The quality of the images varies from excellent portraits and battlefield photographs to some blurry ones of little interest. But as most of the images are interesting and probably new to the vast majority of readers much can be forgiven, even the very poor overview map at the beginning. However, one hopes that if a second edition of this book will be made - then the map will be exchanged and several of the captions improved. Places and dates are quite often lacking and sometimes incorrect.

Well, the bottom line is that this book - even in this first edition - adds to the visual record of the Arctic front during WWII.
created by Lars Gyllenhaal at 21:30 No comments: