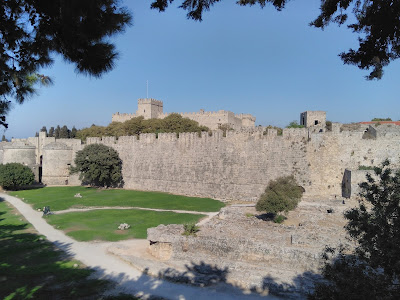 Mussolini´s castle in Rhodes is not the only reminder of WWII on the island.

Could there really be traces of the Long Range Desert Group (LRDG) and Special Air Service (SAS) on the island of Rhodes, not far from the old town? Yes there are such traces but you will not learn about them from most Rhodes guides.

The Palace of the Grand Master of the Knights of Rhodes is not just a Gothic castle inside the old town on Rhodes. During the Italian period on Rhodes (1912-1943) the castle was extensively restored and became a holiday residence first for the Italian king and later for Fascist dictator Benito Mussolini, whose name can actually still be seen on a wall by the castle entrance. That wall and the The Rhodes Jewish Museum would to many visitors seem to be the only traces of WWII on the island, but there is actually much, much more to see, especially if you venture outside the old town.

In this old blog post I presented my first tips where to look for traces of the Italian and German occupation periods. Some days ago I returned from our latest Rhodes holiday, during which I found rather intact WWII trenches and the ruins of an Italian WWII workshop, and visited two sites connected to the LRDG and SAS. 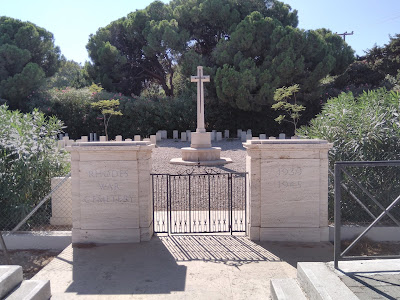 This is where a trooper of the LRDG rests, south of the old town on Rhodes. 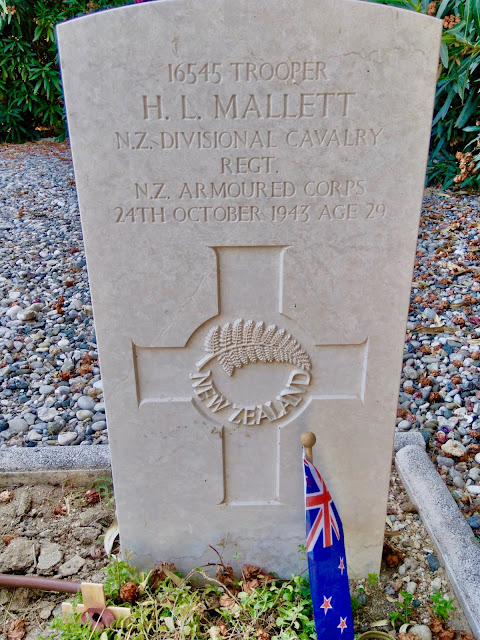 Hector Mallett came from the NZ cavalry, but was killed while serving in the LRDG.

Why on earth is there a Long Range Desert Group trooper in the Commonwealth war cemetery on Rhodes? Surely there are no deserts on Rhodes? Well, let me first explain that after the North African campaign ended in May 1943 the LRDG became more like the SAS/SBS and was used mainly for raids/sabotage on various Mediterranean islands and in Italy and Yugoslavia. New Zealand LRDG Trooper Hector Mallett died from wounds he sustained during an assault against the Germans on the small island of Levita (now Levitha), more than 100 kilometers from Rhodes. The cemetery is not only for those who lost their lives on Rhodes but also on many other islands in the region, some quite isolated. The Rhodes cemetery is located in the southern outskirts of the city of Rhodes, by the old coastal road to Lindos, opposite the Italian, Jewish and Turkish cemeteries. 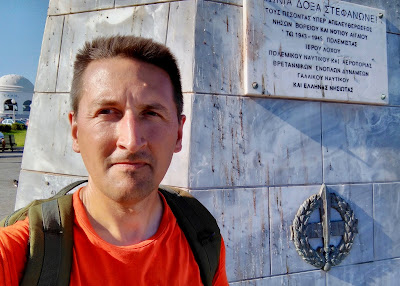 After a long jog from our hotel, the joy of finding the Sacred Band/Squadron.

What about traces of the SAS then? Well, first find Mandraki Port. Just north of it stands a war memorial not far from the water, topped with a winged bronze figure representing Victory. It is located in Pl. Antinavarchou Perikli Ioannidi. One of the units specifically named on the memorial and also represented by its insignia is the Sacred Band (or Sacred Squadron). This Greek special forces unit was attached to the SAS from March 1942 and below is a close up of their insignia including the motto "Return Victorious or Dead" (in Greek), said to be the words with which Greek wives once saw their men off to battle. 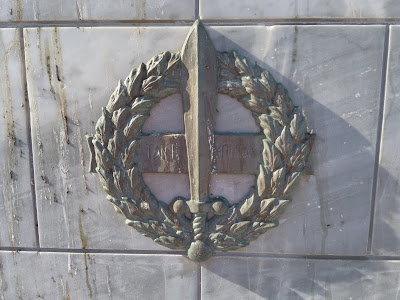 The Sacred Band insignia in bronze was worn on the right breast of the uniform.

By conducting literally hundreds of island raids together with the SBS, the Sacred Band pinned down thousands of German troops on many islands, thus preventing them from reinforcing the German troops in Italy or France. There are two images of the Sacred Band in action on the war memorial, the better preserved one can be seen below. 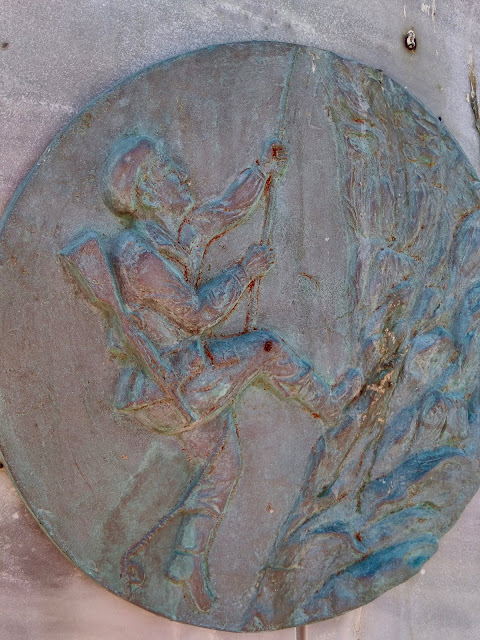 In the modern Greek Army, the Sacred Band's traditions are carried on by the 1st Raider/Paratrooper Brigade, that sports both the band´s sword and the motto of the SAS "Who Dares Wins" in Greek: O Tolmon Nika. If you are a bit of a patch collector you might want to know that the below one was purchased in an army store a short walk from the memorial. 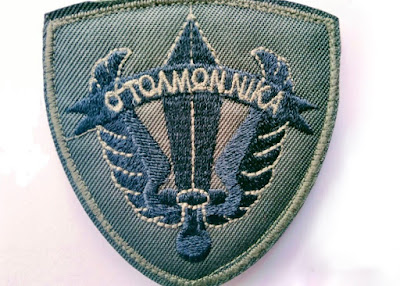 What about the WWII trenches and ruins of an Italian workshop that I also found? Well, I need some more input before blogging about them - but don't worry, I will eventually get that and then blog some more about Rhodes.
created by Lars Gyllenhaal at 11:17 No comments: 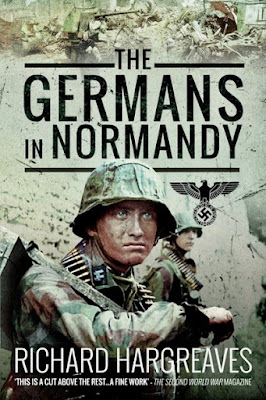 The book that has renewed my interest in the 1944 battle for Normandy.

If you are looking for the greatest books about Normandy 1944 I have some suggestions for you in this and several coming blog posts. Let us start in an unorthodox way with the German view.

There is an abundance of books that focus on the Allied side of this story. In The Germans in Normandy by Richard Hargreaves it is the other way around, and this in itself raises ones interest. Then I was also encouraged to read the book by some words from a fellow author and the Guild of Battlefield Guides (more about Normandy guides in future posts). But, before I venture into actually reviewing The Germans in Normandy I should mention that this 2019 paperback edition is not an entirely new book, as the first edition was published in 2006. Well, that having been said, this book should still rank as one of the best Normandy books.

Richard Hargreaves paints convincing portraits not only of the highest German officers involved. The quotes from them that he presents are both fascinating and in some cases even amusing. One gets the feeling that Hargreaves has correctly identified both the strengths and weaknesses of the German occupiers in northern France. He makes it very clear how much the Germans relied on foreign volunteer troops (many of whom were no true volunteers): “By the spring of 1944, one in six infantry battalions along the Atlantic Coast was composed of Osttruppen and [other] foreign volunteers […]”. In fact, as Hargreaves also points out, in some parts of France the ratio was even higher, so that in certain areas one in five “German” soldiers was not German at all.

The pre-battle conflict between Field Marshal Erwin Rommel and General Leo Geyr von Schweppenburg is amazing to follow and perhaps that row even caused the world famous “longest day” words from Rommel. What about the frontline soldiers then? Well, they are in the book too. Air power enthusiasts also do not have to worry – this book does not just cover the Heer and Waffen-SS but also Luftwaffe aspects.

How were the catastrophic German defeats in Normandy communicated to the German population? Richard Hargreaves shows how the main newspaper of the national socialist party at first rather convincingly “balanced” the defeats with colourful descriptions of the first V1 (flying bomb) strikes against London.

Hargreaves does not end his book with just the final shots in Normandy, but also gives an idea of what the cleaning up there entailed.

You might be tired of Normandy books – but even if you are I reckon you will appreciate The Germans in Normandy. It certainly renewed my interest in that beautiful and once very bloody part of France.

created by Lars Gyllenhaal at 16:21 No comments: 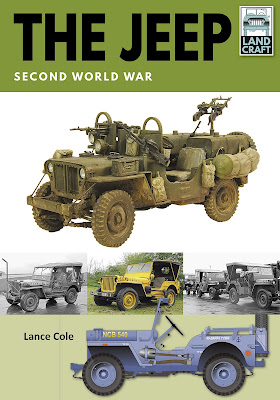 Many books have been made about the first, now iconic, Second World War Jeeps. So why one more? Well, this is a Jeep book with a difference, being specially focused on modelmakers and military vehicle restorers - and not least those with a special interest for SAS and LRDG Jeeps.

Being a co-author of The Long Range Desert Group: History & Legacy my interest in LRDG & SAS Jeeps is pretty strong. I was therefore pleasantly surprised to see a SAS European Theatre of Operations Jeep as the main illustration on the cover of the new Pen & Sword Land Craft series book The Jeep by car designer, author, journalist, restorer etc Lance Cole. The scale model focus of the series (like in the Tank Craft series) is apparent from the SAS Jeep on the cover, as it is a model. But photographs of actual vehicles and color line drawings are also very much part of the book. I would say that even if you are not at all into models and rather describe yourself as a restorer and/or reenactor, you will find this book to be both helpful and simply a pleasant read and good source.

Basically, this book contains the essential development and design history, describes the lovely details of wartime Jeeps, many variants and, of course, the services they provided on various WWII battlefields. Lance Cole delivers both excellent text and many photographs of actual Jeeps and model Jeeps. Modern military vehicle designers would do well by studying the small, very clever touches of the original Jeeps.

The scale models of SAS Jeeps are well covered, both the Jeeps used in North Africa and in the ETO. The book has only one wartime SAS Jeep photo - the most classic one there is. But the many excellent colour photos of SAS Jeep models made me forgive that. The LRDG part is just one page of line drawings, but on the other hand the four page SAS in North Africa showcase features two wonderful LRDG figures that have replaced the original Tamiya SAS figures. The book informs exactly where these figures are from, and describes and shows just about every 1:24, 1:35, 1:72 and 1:76 scale Jeep kit ever made by various manufacturers around the world. The mostly stunning photos show lots of details, scale model modifications (improvements) and in some cases the models have figures and diorama bases.

Not every aspect of this vast subject is covered in the 64 pages and one hopes that Lance Cole might one day produce a second volume with e.g. Red Army Jeeps, captured Jeeps, unpublished wartime photos of SAS & LRDG Jeeps etc. But, let me be clear, this first Land Craft series book is both a very useful and beautiful guide for Jeep lovers and especially those into scale models of this superb little green machine.
created by Lars Gyllenhaal at 16:20 No comments: