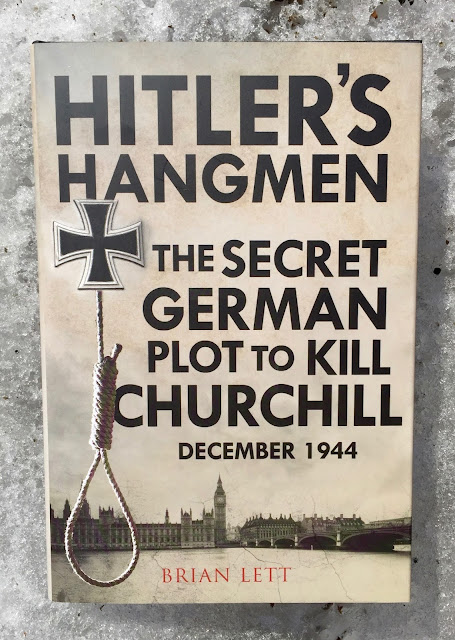 German prisoners of war in the UK had ambitious plans for December 1944.
Years of research by retired Queen´s Counsel Brian Lett has led him to present spectacular conclusions about German plans for the UK connected to the German 1944 Ardennes campaign. This book is of special interest both to those into late German plans and fans of exploring WWII places.
Recently I have reviewed two other books by Brian Lett that have expanded my knowledge of WWII special operations, see my blog posts "A Deniable Operation Under the Swedish Flag" and "SOE:s Mastermind". Here I will review Hitler´s Hangmen: The Secret German Plot to Kill Churchill, a 2019 book by Lett about British fascists, Axis POWs in the UK and how these, possibly even working together, might have affected world history during the German 1944 Ardennes offensive.
Having practiced law for almost half a century it is no wonder that Brian Lett begins his book with a thorough explanation of the Vehmic court, a German punishment court with medieval origins. This vigilante court system was revived among German POWs, also in Britain. Vehmic "justice" seems to have made many German POWs feel that the Third Reich was present also in very small and rural British locations. Lett has visited and photographed a number of these German POW places, and the book will surely inspire several readers to themselves visit them. Few camps are as unchanged as Camp 21 in Scottish Comrie ("British Colditz"), but I must say that even the rather small traces that remain of Camp 17 in Lodge Moor, Sheffield, hold a strange attraction (I confess to being a bit fascinated by WWII-related sites, my latest book is about visiting 200 WWII sites in Sweden).
Now, most readers will be aware of the British Union of Fascists (BUF) under Oswald Mosley - and the BUF certainly is part of this book - but Brian Lett shows that Mosley at the time was only one of several influential fascists in British society. Lett paints portraits also of British fascists like Arnold Leese and his Imperial Fascist League, and MP Jock Ramsay and his Right Club. The latter seems to have had special opportunities to cause serious damage.
Considering the information that Brian Lett has provided about British fascists I would say that most (or even all?) authors outside Britain have underestimated the original British fascist groups and are largely ignorant of the Right Club.
Another reason to read Brian Lett´s latest book is that he writes eloquently about characters like the head of Churchill´s personal security, Detective Inspector Walter Thompson, and the officer of the German Army who became the head of the London Interrogation Centre (London Cage), Colonel Alexander Scotland.
Well, what evidence does the author present to justify the sensational subtitle of this book, The Secret German Plot to Kill Churchill? Quite a lot hangs on the plans developed in the Devizes Camp in Wiltshire and I would like to know more about the interrogation team from the US XVIII Airborne Corps that discovered the Devizes plan. To begin with I will read the whole book one more time, not least for the sheer pleasure, but then I hope to some day get more details both about the interrogators and the interrogated.
created by Lars Gyllenhaal at 20:24 No comments: 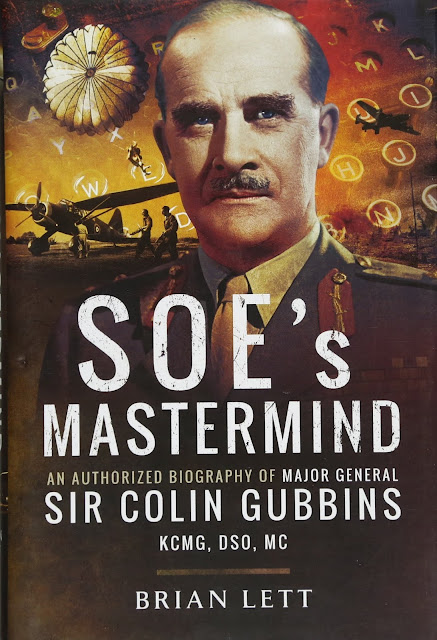 A great read about one of the most influential special operations officers of all time.

His codename was actually “M” as Operations and Training Director of the Special Operations Executive (SOE). He was one of the leading British officers on the ground in Arctic Norway 1940. Long before that he had served in Arctic Russia.

Thus I kick myself for not sooner having read this terrific book about Sir Colin Gubbins. SOE´s Mastermind was first published in 2016 and reviews ought not to appear so long afterwards. But, better late than never. Lawyer and SOE expert Brian Lett starts his book perfectly with the escape from Germany in 1914 that was one of the most fundamental learning experiences of young Colin. Then follow years of extreme hardship as a gunner in the First World War and immediately afterwards, in 1919, on the Russian Archangel front. There he had to adapt not only to the Arctic but also to Soviet fighting methods.

On Ireland and in India Colin Gubbins, initially a very conventional warrior, had to learn even more about irregular fighting methods. The Irish Republican Volunteers became his best “teachers” in how to undermine a conventional army, the British Army. The Army realized that Gubbins had learnt a thing or two about irregular warfare and thus he came to write three handbooks for a planned British resistance movement, the first being The Art of Guerilla Warfare, then A Partisan Leader´s Handbook and finally How to Use High Explosives.

But Lieutenant Colonel Gubbins was not to become an armchair general - due to various mishaps he had to assume the role of Temporary Brigadier not far from the Arctic Circle in Norway. In spite of very little relevant training and unfavourable geographical conditions he managed to put up a rather good fight against the Germans, until ordered to evacuate his brigade. In spite of being under attack he managed quite well, earning the Distinguished Service Order (DSO). Many of the men he had led in Norway were recruited into the newly formed Commandos. Gubbins himself was needed elsewhere, to form the British guerrilla army called “Auxiliary Units” or “Auxies” that were never employed but would no doubt have made life difficult for the Germans in an occupied United Kingdom.

Well, then follow the years as SOE´s mastermind, from 1943 also formal overall boss at SOE. Author Brian Lett refrained from writing another history of SOE, instead he mainly focused on what leading an organization for sabotage in several countries entailed. This being a Nordic-focused blog I will here only mention some Scandinavian aspects. It turns out that SOE from Stockholm launched a number of non-violent sabotage operations directly against the Germans in Norway. For example, capsules with utterly evil smelling fluid were smuggled into Norway and there were smeared on German greatcoats. The terrible smell made the garments impossible to wear and, like broken German windows, caused serious discomfort during the winter.

In my blog post "A Deniable Operation Under the Swedish Flag" I wrote about Brian Lett´s wonderful book Ian Fleming & SOE´s Operation Postmaster. Well, in SOE´s Mastermind one learns of what became of the “Swedes”, among them not least the Danish volunteer Anders Lassen, who later was awarded a Victoria Cross.

Operation Gunnerside, the operation against the German atomic project in Norway, has been covered in many books. Still, the Gunnerside chapter in SOE´s Mastermind does not fail to keep me interested and it makes perfectly clear that Gunnerside became an immediate milestone. To quote Lett: “After Operation Gunnerside Colin found it much easier to obtain cooperation of the regular services for SOE´s operations.”

Finally, there is a very personal link between Colin Gubbins and the Swedish-British SOE operator Malcolm Munthe. His own son Michael served in the SOE together with Munthe. What happened next to Michael was a major blow to the Gubbins family but I shall here only say: do not miss this book and specially not if you are curious about what became of the SOE networks after 1945 - to quote the last chapter´s title “Did SOE Refuse to Die?”.

created by Lars Gyllenhaal at 20:18 No comments: