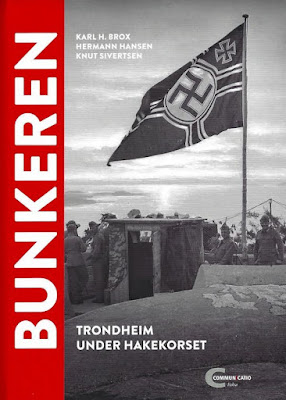 Norway has been blessed with a number of really good WWII history books in recent years. The latest one that I find to be a real milestone is a WWII history of the Trondheim region. It has so many new and interesting photos that even if you don´t read Norwegian you should get it, provided you have a keen interest in Scandinavia during WWII.

The title in translation is The Bunker: Trondheim Under The Swastika and the authors are Karl H. Brox, Hermann Hansen and Knut Sivertsen. I agree with the authors that from the viewpoint of the German military, Trondheim, not Oslo, was the most important city in occupied Norway. But the book is both about the fighting in the area in 1940 and what happened afterwards. What strikes me as the book´s main strength, aside from the fantastic photos, is that it is the result of not years but decades of research. The collaboration of many Norwegians, the grandiose plans to remake Trondheim into a major German/Germanic city, info about little known German units - its all in this impressive book.
created by Lars Gyllenhaal at 14:29 No comments: 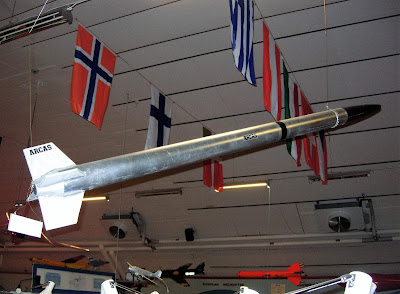 Sweden´s space pioneer hanging in the ceiling of the Vidsel museum.

Some of the most amazing museums are those that are generally not open. Such is the status of the museum of the Vidsel Test Range in Swedish Lapland. This test range is a Swedish strategic national test and evaluation asset. The museum tells the little known stories of how Sweden became a space and drone nation.

Thanks to Mr. X I recently got the opportunity to visit a museum few outside of the aerospace industry get to visit, the Vidsel Test Range Museum. It is probably the only place in the world reminding about the first Swedish rocket launch into space. The rocket in question was a US-made Arcas rocket launched from a place called Nausta, in 1961 - i.e. 55 years ago. Not that much has been written about the launch since then and the nickname it got at the time is just about forgotten now: "Plutnik". Aside from the similarity with Sputnik the name indicates something small and cute.

The Vidsel Test Range Museum preserves many unique machines but sadly I was in a hurry and therefore can only present one more - but it is a milestone: Sweden´s first drone, the target drone RB01 Jindivik. I think the year of its first Swedish flight may surprise you, 1959. Also, few will guess the manufacturer: the Australian Government Aircraft Factories (GAF). 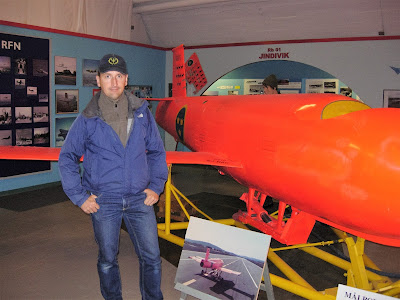 Sweden´s first drone and yours truly. 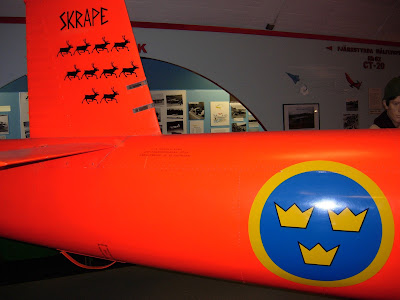 Yes, those are reindeer and I am not sure what they signify.

Thank you, folks, for letting me in, and the photo permit. For more photos from the museum, visit this Vidsel website (in Swedish).

Want some more little-known Swedish history? Then how about how many German aircraft the Swedish Armed Forces shot down just in 1940, or how more Swedish citizens have died for jihad than for Hitler.
created by Lars Gyllenhaal at 21:21 No comments: