It turns out Swedish volunteers in Finnish Lapland fought against a Soviet elite unit. Also according to Russian authors, an incident in Lapland strongly affected the course of Swedish history.

How were Swedish volunteer units during WWII viewed abroad at the time? Especially in the Soviet Union? Very little is known about this. But recently I stumbled upon some amazing insights into the Soviet view.

The largest Swedish volunteer formation during WWII was the Swedish Volunteer Corps (Svenska Frivilligkåren or SFK) for Finland, set up to fight in the Winter War of 1939-40. Almost 13,000 men applied and 8,260 were accepted into the ranks of SFK.

The insignia of the three (strids)grupper (combat groups, in effect large battalions) that constituted the infantry units of SFK, which also had i.a. an air element.

For more information about SFK in general see Swedes at War. What follows is not in the book, because the following information is mostly previously unpublished in other languages than Russian.

I made the discovery some weeks ago, while researching the history of the Russian Airborne Troops, the VDV (from Vozdushno-Desantnye Voiska). I was not looking for anything about Swedes but just trying to summarize the history of the VDV. But while doing so I came upon an intriguing passage about its most famous commander, Army General (i.e. a four-star general) Vasily Filippovich Margelov. This man headed the largest elite formation of the Soviet Armed Forces from 1954 to 1979 and his character is still today very much part of the VDV. The largest Russian website about him states (in my translation): "During one of the operations Margelov captured officers of the Swedish General Staff".

I was baffled, how could this be? Sure, there was a sort of explanation in that at the time, 1939-40, he had been in Finland commanding the Separate Reconnaissance Ski Battalion of the 596th Rifle Regiment. This battalion consisted of Leningrad´s and Moscow´s ski elite.

Still, I found it very odd I had never heard about Swedish General Staff officers being captured during the Winter War. I had however, been standing very close to Margelov once, in the spring of 1991, in Moscow. At the time I think I did not know much at all about him. I just happened to see his gravestone, shortly after his death. The reason I photographed it was probably because it sported a VDV emblem, a large medal of a Hero of the Soviet Union and a photo of the general wearing an incredible amount of decorations. here is the photo I took then: 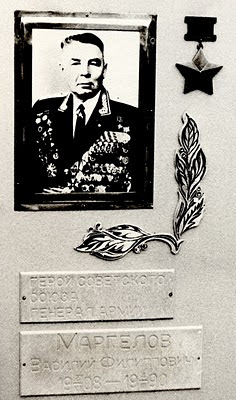 I then googled +Margelov +"of the Swedish General Staff" in Russian, i.e. +Маргелов +"шведского Генерального штаба". I got 929 hits and saw that Wikipedia and many other websites repeated the claim. Still, one should be wary about strange statements and google results do not mean a great deal.

So I got hold of the most recent book about Margelov. Well, here are the relevant excerpts from from Airborne Trooper No. 1 – Army General Margelov by Alexander and Vasily Margelov (Moscow: Olma-Press, 2003), page 42-43 in my translation:

On one such raid Captain Margelov captured officers of the Swedish General Staff. […] when the soldiers were about ten kilometers inside Finnish territory, they discovered fresh enemy ski-tracks. The battalion commander announced his decision: ”We´ll ambush”. More formally he ordered: ”Fist company, to the right, second to the left, the third company will advance two hundred meters and cut off the retreat route of the opponent. Take some prisoners, preferably officers”.
The enemy skiers returning in their own ski tracks did not notice our camouflaged soldiers and thus came under their intense fire. During the course of the short but fierce fire-fight the battalion commander managed to notice that some of the soldiers and officers were wearing strange uniforms, not like Finnish ones. None of our soldiers could even imagine the possibility of here encountering soldiers from a neutral country. ”Since they are not in our uniform and fighting together with the Finns they must [anyway] be our adversaries”, the commander decided and ordered to take prisoners primarily among those wearing this strange uniform. There were, unfortunately, killed also on our side. To bring the prisoners through the frontline […] was a most difficult matter. Not only was it necessary to carry them around, it could also not be allowed that they froze. […] During the course of the fighting six persons were taken prisoner, not Finns but… Swedes. They were immediately sent off to Moscow. […]
Again the NKVD, again questioning [of Margelov]. During the questioning Vasily Filippovich [Margelov] then learnt who it was he had taken prisoner: Swedish officers, studying the possibility of combat employment for an expeditionary volunteer corps on the Finnish side, that had arrived already in late January, early February in the sector adjacent to Kandalaksha. […]
The deaths and the captured from the first small contingent sent to fight against the USSR, created such a depressed resonance in Sweden, that until the end of the war the Swedish government could not decide to send a single [regular] soldier. Only through the blood of their [volunteer] soldiers the Swedes once again reached the conclusion that traditional neutrality towards Russia was nevertheless better than war.
If the Swedes knew who they owed for the preservation of their neutrality and for saving the Swedish mothers and wives from having to cry over their [fallen] sons and loved ones…

Russian-language web-articles summarize the above like this (also in my translation): ”Thanks to the actions of Margelov´s scouts, Sweden did not enter the war and preserved its neutrality”.

The Russian federal news agency RIA Novosti in 2008 on the occasion of the General´s centenary repeated: "During one of the operations he captured officers of the Swedish General Staff".

What then is true about Margelov´s "Swedish General Staff officers" and how their capture affected the Swedish government? I will blog more about this tomorrow.

Those of you who understand Swedish might want to watch yesterday´s local TV news from northernmost Sweden, one of the later items is about this story including an interview with me.
created by Lars Gyllenhaal at 21:27