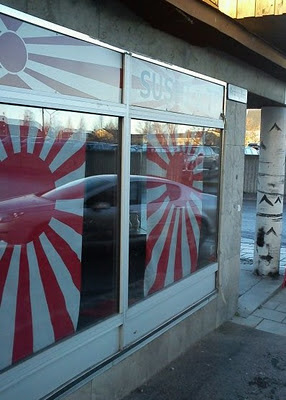 I wonder if this sushi restaurant in Sweden raises an American or Chinese eyebrow?

I recently noticed the above pictured sushi restaurant in Piteå, up here in northernmost Sweden. As you can see it prominently displays the WWII flag of the Japanese Army and the almost identical flag of the Japanese Navy. I wonder if these could be used the same way in the US or China?

I only feel sure that the German equivalent, the Reichskriegsflagge, would not be possible to display in the same manner. In any country.

Please note that I know that the above Japanese Navy flag is not limited to WWII, it came back in use after the war and thus cannot be said to only symbolize Japan during WWII. However, the pictured Japanese Army flag, which is the top one, was used only until 1945.

Well, could a sushi restaurant in the US or China use these flags without attracting criticism?

Speaking about WWII Japan in Sweden I believe that until this year very little, if anything, has been written about the 1942 "Battle of Los Angeles", which was basically mass hysteria in action - only one enemy was real, a Japanese submarine. IMHO the first book in Swedish to describe this weird battle in detail is the anthology Kriget som aldrig kom ("The War That Never Came"), published this spring by the superb Naval Museum of Karlskrona. Some weeks ago another book appeared that mentions the "battle", simply entitled Swede. I recently blogged about it.

Speaking about the battle of LA I reckon most of you who are reading this post have seen the 1979 war movie "1941", which in spite of the wrong year is based on the hysterical 1942 events in LA. Well, even if you know that movie well I reckon you may not have seen this period teaser for the film:

Finally, just today, thanks to a friend in Slovenia (hat tip!) I found this stunning image (the bottom one) I had never seen before, of the Japanese officer who only surrendered in 1974, Hiroo Onoda. Evidently, he is still alive and is now 89 years old.
created by Lars Gyllenhaal at 14:48