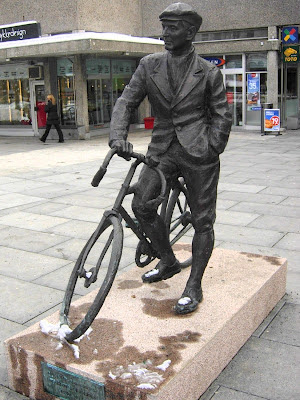 Gunnar Sønsteby DSO, Norway's most highly decorated warrior, has just passed away. He helped me with one of my books. Here he is portrayed in central Oslo. I took this photo last winter. 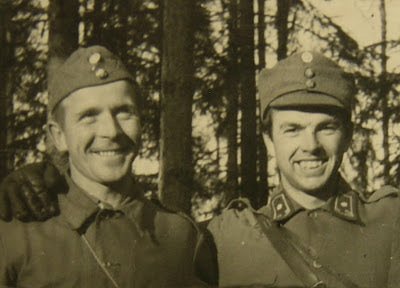 Arne Pettersson, standing to the right, who was both in Finland and Norway during WWII, has also just passed away. He helped me with several of my books. Here he is in 1941 with his typical smile and his best friend, Onni Niskanen.

Norway has just lost its most highly decorated warrior, Gunnar Sønsteby DSO. Sweden too has just lost a special soldier, Arne Pettersson. I had the privilege of meeting both and they both will continue to inspire me.

I got to know Arne Pettersson thanks to my parents, who lived close to him. He was a very warm, social person but it took me several years to understand just how experienced he was, both as an officer and an athlete. Partly because he had experienced so much, partly because he was a humble man. In Finland he served as a volunteer platoon commander on the Hangö front. Back in Sweden he commanded a ranger platoon on the Norwegian border and on several occasions performed recon missions inside Norway, i.e. spying on the German troops in Norway that Gunnar Sønsteby fought against.

Gunnar Sønsteby I met only once, at the funeral of our common friend, the Swedish SOE operator Allan Mann. But he made a very strong impression on me and later he helped me over the phone. I wrote a chapter about his wartime outfit, the SOE Linge Company and its modern heirs, in my book Elitförband i Norden ("Nordic Elite Units", a book that is yet to be translated). Arne Pettersson also contributed to that book.

When I think about people that have motivated me and that I feel strongly about, I think about these men. Their generosity, not least towards me personally, I will never forget. Their personal courage are an example for generations to come.

created by Lars Gyllenhaal at 22:16