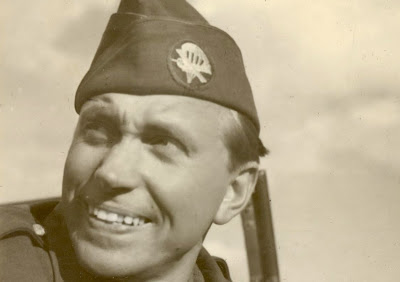 Swedish volunteer paratrooper Gösta Wollin was one of the very first to drop over Normandy, some minutes before it was actually D-Day. PHOTO: Karin Wollin

This Friday will be the last D-Day anniversary with a fairly large number of veterans taking part. In 2024 there may still be some veterans around, but very few fit enough to be in Normandy. It made me rather sad in 2004 that our own D-Day veterans got no media attention. Will 2014 be better?

Yes, Sweden too has D-Day participants to remember. I am not talking about Americans of Swedish descent now, but men born in Sweden and who actively were a part of D-Day. But how is that possible considering that Sweden did not fight as a nation in WWII? Well, it is all explained in Swedes at War but to summarize, hundreds took part as seamen in the D-Day invasion fleet under various flags. In addition, there were men born in Sweden serving in various Allied combat units that were landed on the now world famous landing beaches or, landed by parachute or took part in D-Day as fighter or bomber pilots. How many we can still only guess, a hundred seems very plausible. If one limits oneself to those who in 1944 were still Swedish citizens, then the figure may be just a dozen, but on the other hand some more Swedish citizens arrived in Normandy in the days following D-Day.

How many Swedes were there on the other, German, side in Normandy? We have identified three, in three different divisions of the Waffen-SS. Although few they too are described in our book.

I had the great fortune to find and communicate with the probably very first volunteer from Sweden to arrive with the Allies in Normandy, Gösta Wollin from Ystad in Skåne (in southernmost Sweden). He is pictured above in his US airborne cap. Against all odds he was able to join the US 82nd Airborne Division and parachuted with them over Sainte-Mère-Église on June 5, 1944.

If one broadens the definition of Swede to all those that were called "Swede" because of their name and roots, well then several thousand such Swedes were landed in Normandy. One of them you have probably some knowledge of. If you have seen the movie "Saving Private Ryan" you remember the role played by Tom Hanks, right? He portrays the commander of Charlie Company of the 2nd Rangers. Well, in real life that commander´s name was not John Miller, as Tom Hanks is called in the famous movie, but Ralph Goranson. He was the son of a Swede who left Mönsterås in Småland to start a new life in the US of A, his mother was from Norway. I had the privelege of being in touch with Ralph Goranson by mail during his final years. Our book Swedes at War made the fact of Ralph Goranson´s important contribution on D-Day known in the Swedish language and a local paper in Småland followed up on our book´s words about him, but no national Swedish newspaper has yet done so, not even when he died in 2012.

It was similar with William Yngve Anderson from Kramfors. He took part in D-Day as a P-51 Mustang pilot - see the book cover in the above right corner. All his planes were painted with "Swede´s Steed". My co-author and I were first to document in a book that he was Sweden´s only flying ace - but he has so far never been mentioned in any Swedish nationwide newspaper.

But it is of course not too late to show these men respect and it is therefore with great joy that I can report that 69 former Swedish parachute rangers trained at FJS in Karlsborg, 23 to 72 years old, will be paying tribute to the paratroopers of D-Day by jumping this Friday over Normandy. It will also be the largest ever drop abroad of FJS-trained Swedes. It is a most suitable tribute because one of the founders of FJS was Erik Lewenhaupt from Stockholm, who parachuted over Normandy on June 6, 1944. So, thanks to the commemorative jump on Friday, I reckon at least Erik Lewenhaupt will get some recognition in our media.

Another thing that made me happy the other day is the news that Swedes at War is now available not just as a large paperback in Swedish and English but also on Kindle, in English only so far, both in the US, in the UK and also as an ePUB via iTunes.

P.S.
Note that the above figures about Swedish citizens on the Allied/German sides relate to Normandy on D-Day. The total figures for all areas of operations 1939-45 are more than 1,000 Swedes in various ground, naval and air units on the Allied side (above all Norwegian units) and 8,000 in the Norwegian, British etc Merchant Marine - in comparison with 200 Swedes in different German units. There were also Swedes on tankers in the Baltic supporting the German Navy but these sailors (about 500) were not in the German Navy or Merchant Navy but on chartered Swedish ships.
created by Lars Gyllenhaal at 11:20