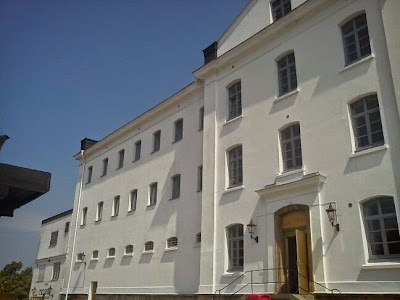 In this former prison in Karlskrona, Sweden, one of Russia´s first aviators was imprisoned. I met and interviewed him in 1988.

Today it is exactly 100 years since Russia became part of World War One, or as it is still known in some countries, the Great War. But there is almost nothing that reminds about it in today´s Russia, although the Russians generally have a great interest in history and especially wars.

You will find a World War Two monument in just about every Russian town, and in many villages too. In large cities you will find several statues and busts commemorating WWII heroes and a T-34 tank in some public area. Museums and exhibitions about WWII are also very numerous. But the first monument about World War One was unveiled only in 2004 and the first-ever Russian World War I museum has not yet opened (but it will, in St. Petersburg). These and other signs of low interest and scanty knowledge are covered in a highly readable article in today´s English-language The Moscow Times.

Why this low interest? After all, three million Russians lost their lives during WWI. Yes, THREE million lives. The above article tries to explain this mystery and I am not saying it got things wrong but perhaps one could explain even more simply by saying that there was just zero use for WWI. It could not benefit the Soviet state in any way and "stole" attention from the "October Revolution", although one can argue that with no WWI there had also been no revolutions in 1917...

I was thinking a lot about Russia 1914-18 when I recently for the first time visited the former prison in Karlskrona (south Sweden) of Anton Nilson, the Swedish revolutionary who went to Russia during the last stage of WWI and became one of the Red Army´s first aviators. I interviewed him during five intense hours in 1988 and the result is in Swedes at War 1914-45. Part of Nilson´s former prison is now becoming an international school and part of it is a cool restaurant. You should visit it when in Karlskrona. Thanks to the kind staff I got to see several prison cells, some of which looked pretty unchanged since Anton Nilson was in the building.

created by Lars Gyllenhaal at 16:05