The Mercenary Behind Alexander Skarsgård: The Real Tarzan Story 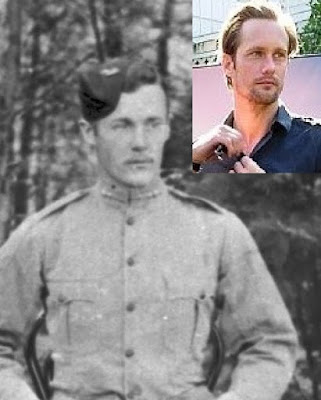 All reviewers of the most recent Tarzan movie have so far missed a most ironic (even spooky - compare the faces above) aspect of a Swede portraying the "lord of the jungle": the origin of the Tarzan legend can be traced to a Swedish mercenary in Africa. I have researched his long and stunning career.

Alexander Skarsgård´s face is now on several magazine covers here in Sweden and many other countries too - because of his latest film role, depicting one of the oldest and most iconic action characters ever. I too have now been to the cinema and have seen "The Legend of Tarzan". This latest version of the story mostly takes place after he has spent several years in England, but it also looks back at the crucial childhood moments of John Clayton, the baby boy that after some rather rough ape training turned into the legendary Tarzan. However, nowhere in the movie or on the internet have I found anything to suggest that any film maker, critic or Skarsgård himself is aware of the Swedish origin of the Tarzan story. True, very little has been written in English about this in recent years. But if one can understand Swedish there is a book focused on this aspect, the translated title being The Man Who Found Tarzan (so far only available in Swedish, Mannen som hittade Tarzan) by Joakim Langer.

Well, who found Tarzan, or more correctly, who gave Edgar Rice Burroughs the story that he in 1912 transformed into Tarzan of the Apes? There is much that points at a man from Stockholm, Thord Ivar Hallström. His life might seem just too incredible to be true, especially coming from such a peaceful country as Sweden. But there are many thousand documents, including good photographs, in several official archives in Sweden, Britain and the United States plus private archives in several countries - all proving that Hallström, who after entering British military service in Africa became Ivor Thord-Gray, is Sweden´s most experienced soldier of fortune ever. He served under no less than 13 different flags and fought not only in Europe and Africa but also in Asia and Latin America. In Mexico, 1914, in Pancho Villa’s service, he was in charge of the artillery. During the Russian Civil War (1917-1922) he was highly decorated and rose to the rank of a Russian general in Siberia. In 1935, he was again promoted to the rank of general, this time in the United States. Fighting in hot or freezing places was not his only talent, though. Before he died he managed to conduct enough research to become a respected ethnologist and linguist. You will find more details about Thord-Gray´s military career in Swedes at War 1914-1945 by yours truly and Lennart Westberg.

The above photograph of Thord-Gray is one of several I found in his under-researched archive within the University of Umeå. It depicts him as a cavalry volunteer on the British side in South Africa. It was during these years that he took part in the capture of a human, a boy, who had been living with some baboons. Joakim Langer has found the first traces of this account in Cape Town. It was in the Mount Nelson Hotel that Thord-Gray in September 1906, thus soon 110 years ago, told a local journalist about a boy raised by apes. That interview was later quoted by American journalists. The similarities between Thord-Gray´s account in 1906 and the 1912 tale of Tarzan by Edgar Rice Burroughs are in themselves telling. But one can also, as Joakim Langer has done, look closer at Tarzan´s noble name. Aside from being born as John Clayton he is also Lord Greystoke. In the early 20th century Thord-Gray spellt his name Thord-Grey. Lord Greystoke and Thord-Grey...

The 1906 interview with Thord-Gray about a boy raised by apes seems not yet to have appeared on the net. However, search engines can locate, in old US newspapers, this article that appeared in print the first time in May 1934:

BOY KIDNAPED [sic] BY BABOONS; TURNS TARZAN
The story of a famous fiction character, who was raised from babyhood by a tribe of apes, is entirely plausible, says Major General Ivor Thord-Gray, soldier of fortune who recently received the most valued decoration of the Swedish Government. Thord-Gray, who has campaigned and explored in a dozen countries and holds numerous decorations, related the story of a sickly eight-year-old white boy, who was seized by baboons while he was serving in the British Army at Pondoland, South Africa. The boy was being wheeled about in a perambulator by a native girl when several score of baboons swooped down upon a nearby field, where corn was ripening. The girl became frightened and fled. Soldiers drove off the animals and found the perambulator empty. The body of a young baboon lay alongside the carriage. "Well, it was not until four years later," he said, "that we got any inkling of his whereabouts." "About a day's march from camp," he said, "a sergeant came running up and told us he had discovered a hairless baboon. We followed him to the base of a. cliff and there before us was the body of a big, husky boy. his skull cracked and bleeding "The scouting party had found him among a family of baboons. The beasts, seeing the approach of the party, tried to scamper up the cliff. Most of them escaped but the boy, not as agile as the beasts, slipped and fell to the bottom. "The boy was more ferocious than the baboons. He jabbered in their language and was as wild as any ape."

Considering Ivor Thord-Gray´s words and that Tarzan now also is portrayed by a countryman of Thord-Gray, one might say that in 2016 Tarzan of the Apes earned a new title: Tarzan of the Swedes.

P.S.
What I thought about the new movie? Beautiful and pretty good entertainment, but the ending is kind of...

created by Lars Gyllenhaal at 19:18