Traces of Fallschirmjägers on Swedish soil, still in situ at the time of writing, and a mysterious "marching drink". These are some of the things I´d like to show and discuss through this post.

There is still much to report from the July trip to Norway. Here is the first report, and the second and third. Now comes the fourth and final one:

After having seen what might be the last intact window in a Wehrmacht shelter (see the first report) we continued upwards and towards the Norwegian-Swedish border. We found several more shelters on the way but none as good or interesting as the "window-shelter". We did, however, meet some reindeer and among the things we found left behind was a grey blanket and an intact champagne bottle - alas, empty and lacking the main label, probably removed by a previous visitor. But the remaining upper label told us it was a Veuve Clicquot Ponsardin.

Just before crossing into Sweden we stumbled upon this rusty "briefcase": 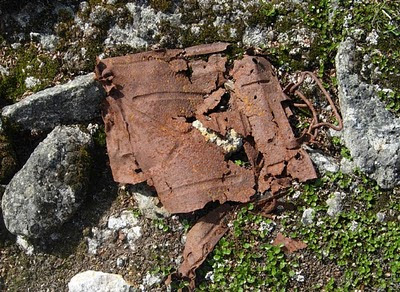 A German grenade case in the open. This type was for mortar grenades.

It was just some ten meters from the border. Having found this we guessed there would be more to find in the vicinity. We were right, we soon found three German positions. Here is the best one: 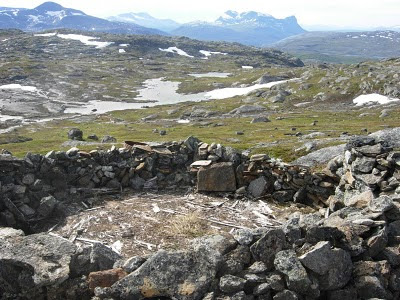 One of three German positions facing facing one wartime Swedish border hut. This was probably where the German border guards slept. 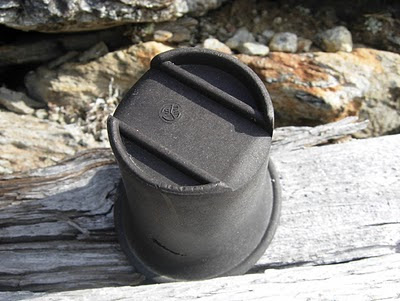 This German bakelite cup was still standing inside the above position. This type of cup was attached with a strap on top of a Feldflasche, a canteen. Note the factory marking (the cup is upside down).

Just how close it is to the hut used by a Swedish Army border squad is apparent from this photo. In the foreground German wood, in the background the Swedish hut roof. 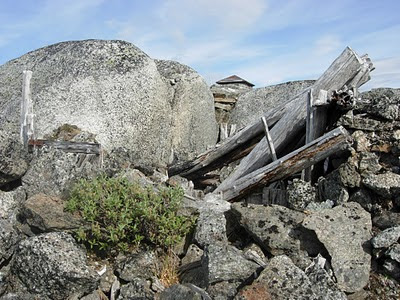 The roof in the background is in Sweden. 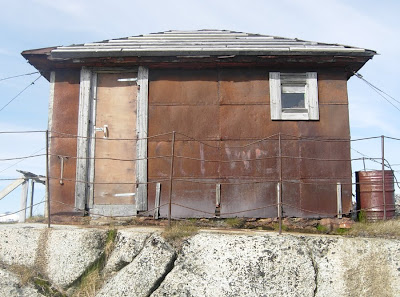 Same roof up close. You can still make out remains of yellow paint exclaiming SCHWEDEN, German for Sweden.

The Swedish border hut dates back to the early 20th century when it was used for weather observations.

Going down the mountain on the Swedish side we knew we probably would find some more German traces, from the Luftwaffe. We were approaching the crash site of a Junkers Ju 52 shot down by Swedish AA-gunners on June 2, 1940. This was one of at least three German aircraft downed by the Swedish Army in the area in the spring of 1940.

We had visited the site before but knew there was more to find as the place is hard to reach, too steep for many visitors. Thanks to that and that there are no signs or paths there still is a lot left to see. We were again fortunate as we found sections of the aircraft that we had not found before, thanks to approaching from above.

These are some of the larger remains, that one finds quite easily: 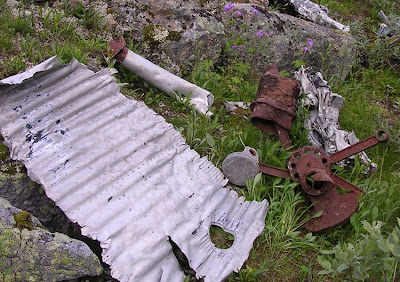 Wreckage from the the Ju 52/3m "DC+SP", shot down just some seconds before reaching Norwegian airspace. The aircraft belonged to the 1./K.Gr.z.b.V. 106.

In contrast to the debris lower down we now found several items that had to do with the crew and paratroopers on board the aircraft: D-rings, pieces of cloth and some metal caps from German stick hand grenades. But also some things we have not seen before and are not able to identify. 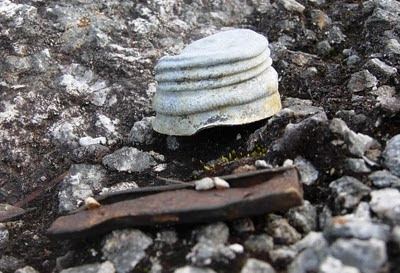 The upper thing is a metal cap from a German stick hand grenade, a Stielhandgranate 24. This was part of the load of the paratroopers, as was the rusty clip for a Karabiner 98k (short carbine model 1898). 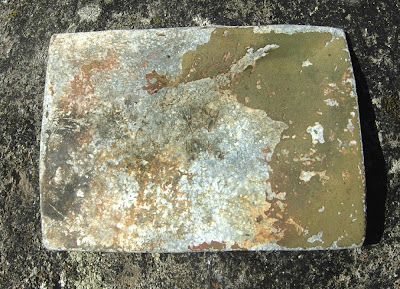 I have no idea what this is but it has remains of paint and in the middle reads "WFCC" above the year 1936. To see the letters and year, just click on the photo. The original size is 7x5 cm. Does anyone know what it is, or can make a qualified guess? This has the look and size of a film roll container but no film or anything else inside. 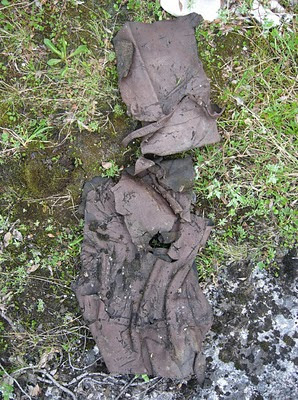 These large pieces of leather made me think they might have been part of an aircraft crew member´s leather jacket.

Unfortunately it was getting late and we had to get to a shop before closing time. But the stuff will probably remain in situ for long - first of all the things are covered by snow most of the year, secondly few people know the exact sites and even fewer have the will and strength to get up to them, especially the upper sites.

For traces of paratroopers on the Norwegian side of the border, see this report I wrote some years ago.

The next day we went back inside Norway, to Björnfjell, and made some pretty neat discoveries in the village "centre" (it is very spread out) just by looking into large crevices. 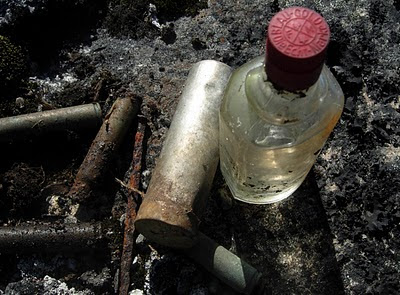 When we found the bottle of "Glockengasse 4711" we did not know it was an eau de Cologne. The name is actually the address of the house where the original eau de Cologne was produced. 4711 being the number assigned to the house during French occupation. The bottle etc is back in place now and hopefully will remain there, to be found many times again. 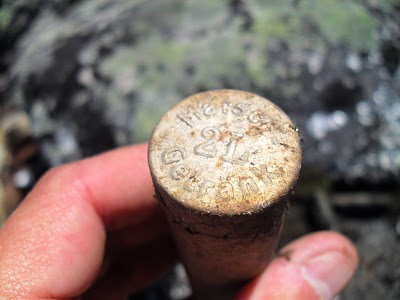 A tube cap stating two liters of Marschgetränk, meaning marching drink. I have never found this in Finland and Russia which makes me wonder if it is a drink that was available only in the early stage of WWII? What did it contain, just sugar and vitamins or? I really would like to know about the ingredients.

Among the German stuff we found also this: 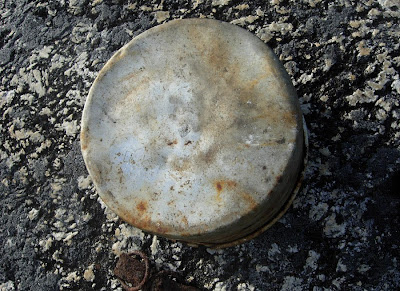 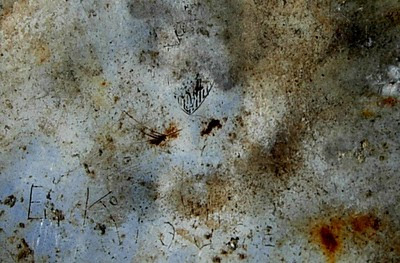 In the middle a crowned Norwegian state shield. Below it the owner´s name: "E. Krause". That sounds like a German, not a Norwegian soldier. However, the owner might well have been a Norwegian with German roots, or it may have come from the large Norwegian Army depot that the Germans captured and made use of. 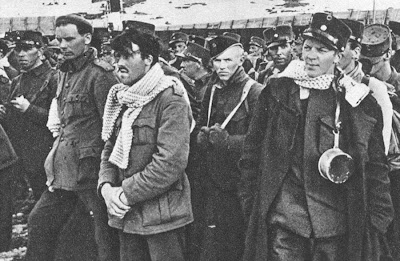 Norwegian soldiers held as prisoners by the Germans, most probably at Björnfjell. Note the bowl - of the same type we found. 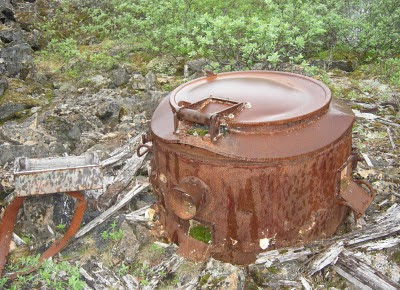 On our final day in the Björnfjell area we revisited the German "field kitchen" which I have since come to realize is a pressure cooker used mostly inside forts. 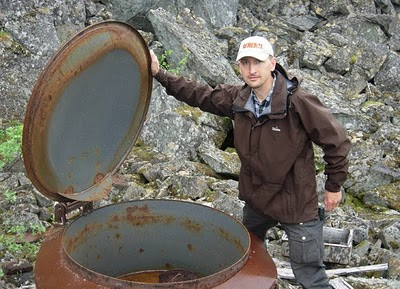 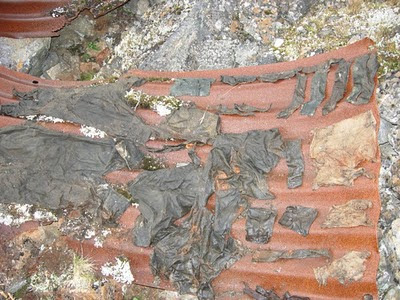 These uniform pieces were lying in a puddle inside a cave used by the Germans (probably not built by them but long before WWII).

Detail of pocket - the pointy aspect makes me think of a non-German uniform. A slave worker´s perhaps? Any ideas? The pieces are back inside the cave now. 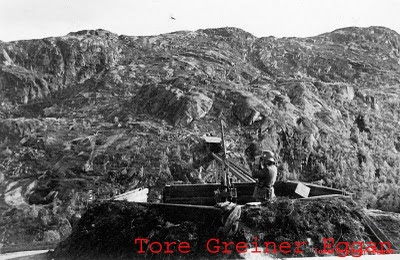 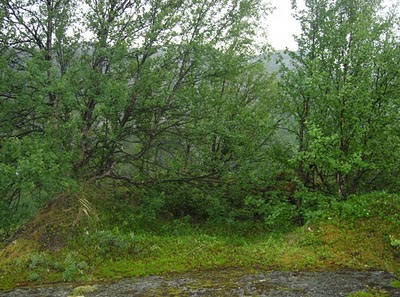 Same place today - the position is still there but trees and bushes have taken over, which is why you have to step inside the position and look though the foliage. Then you will see this: 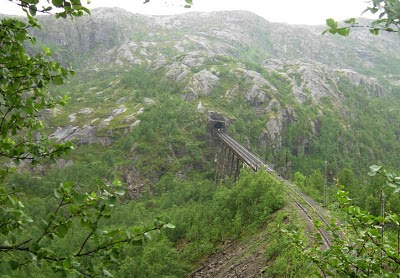 The German-made Norddal bridge (in Norwegian: Norddalsbrua), built in 1902.

The Norwegian Army attempted to destroy the Norddal bridge in 1940 but only managed to damage it. The Germans were able to quickly repair it. Since 1988 it is no longer used but there is now talk of modernizing it and putting it back in service, due to an increase in ore exports.

Moving into Narvik itself we did two final then-and-now photos. 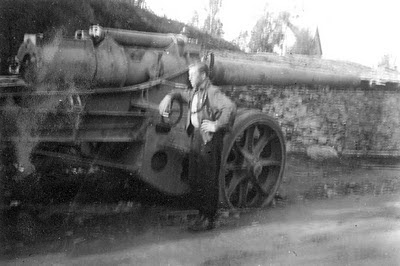 Swedish Air Force soldier Lennart Engerby in Narvik 1945, standing in front of a French artillery piece used by the Germans a 14.5 cm called the K405 (f) by the Germans. In the background you can make out the tower of a church. 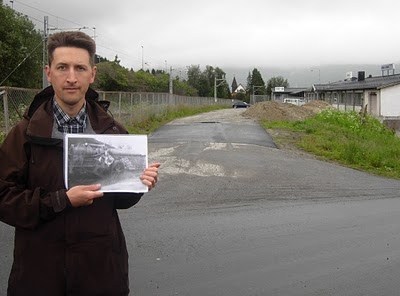 The church is still there. 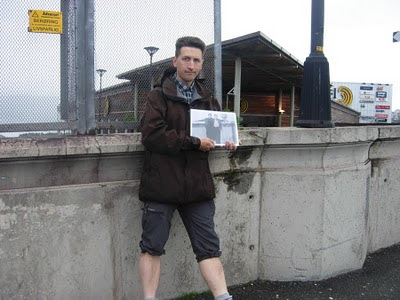 Yours truly and what is probably the same spot. The street level seems to have been raised. The place is on the railway bridge by the city centre roundabout.

Finally two photos that have nothing to do with WWII, but... 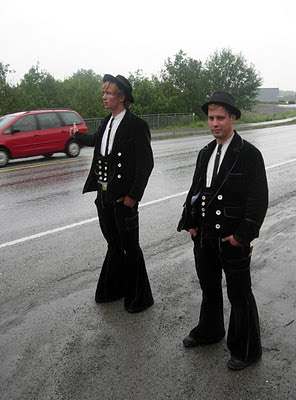 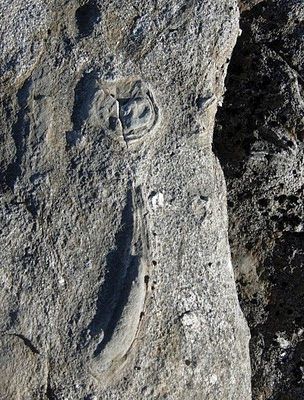 I stumbled upon this petrified flower up in the mountains of Björnfjell. Can someone say what it is???

That was some trip. Hey, please, if you know something about Marschgetränk, then share it.
created by Lars Gyllenhaal at 15:38