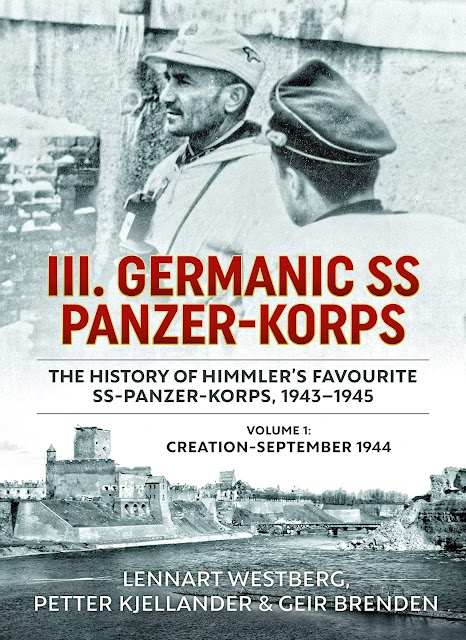 277 large size pages about the Waffen-SS and the battle of Narva 1944.

Rather surprisingly, this year two books focused on Nordics in the Waffen-SS have been released. First The Finnish SS-volunteers and Atrocities 1941–1943 by Professor Lars Westerlund, and just recently III. Germanic SS Panzer-Korps by Lennart Westberg, Petter Kjellander & Geir Brenden.

This SS corps was a Waffen-SS armoured corps which saw action mainly on the Eastern Front and is often associated with the Estonian city of Narva due to its fighting there. The corps was formed in April 1943 and first commanded by the former Wiking commander Felix Steiner. III. Germanic SS Panzer-Korps is being released in two volumes by the UK publisher Helion & Company. The first volume, just released, covers the background of the corps, its creation and history until September 1944.

Counting myself as a close friend of Lennart Westberg (we have written two books together) I should not really review his new book, but I see no reason why I can not give an idea of the contents. Naturally, the III. Germanic SS Panzer-Korps is the main focus, but the first 45 pages summarize the latest research about the roots and purposes of the Waffen-SS and especially about its recruits from the Nordic states. The authors describe both the incredible expansion of the Waffen-SS and how the SS "brand" was renewed in 1944. Already in the introduction there are several images that few will have seen before, and not just propaganda photographs.

While photographs, especially previously unpublished ones, are important (not least in this book), the III. Germanic SS Panzer-Korps also contains new insights, e.g. into the serious difficulties to keep Norwegian volunteers within the Waffen-SS. Associate Professor Sigurd Sörlie has contributed a summary of his relevant research to this book.

Many books about the Waffen-SS just mention the often very large component of ethnic Germans/Volksdeutsche (from German minorities outside the Third Reich), but in III. Germanic SS Panzer-Korps they are very much present.

The many large photographs are in some cases of spectacular quality and those from within the city of Narva 1944 should be of interest to a wide group, not least those who plan to visit the city. Military vehicle (tank) buffs will find several images of Panthers and other vehicles, also Italian ones, of great interest.

Finally, the propaganda posters in the book deserve special mention. The SS, for Ersatzkommando Danmark, even produced a poster highlighting the significance of Narva, and the book´s poster captions explain the symbols and messages in this and other relevant Waffen-SS posters.
created by Lars Gyllenhaal at 12:19