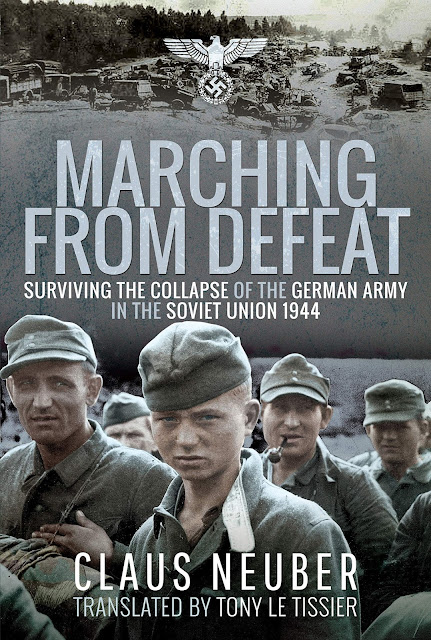 A lot of people have seen “As Far As My Feet Will Carry Me”, a 2001 WWII movie based on a book by Josef Martin Bauer. Both can be summed up as an exciting escape story: a German soldier, Clemens Forell, is sent to a very remote Soviet camp and walks to freedom against all odds. However, it has turned out that very little in that film/book can have come from the actual life of the real Forell, Cornelius Rost. Well, is the new book Marching From Defeat by Claus Neuber better than Bauer´s book?

Marching From Defeat is a book from 2020 in English but was published in German seven years ago, as Marsch aus dem Untergang. Simply put it is an autobiographical escape account by Claus Neuber, who was a German Army artillery lieutenant on the 1944 Eastern Front, serving in the 18th Panzergrenadier Division. Like thousands of other German soldiers he finds himself caught up in Operation Bagration, the huge Red Army offensive in the summer of 1944. He is then on the run behind Soviet lines for more than two months and during that time he is captured by the Soviets but manages to escape from his first camp.

Neuber recorded his experiences of escaping from Soviet captivity in a report soon afterwards, and later expanded his account. But it was not published in Germany until 2014. To tell you what I think of his book I will start with the credibility and then what it was like reading it.

Basically I wish Claus Neuber had met a more objective and professional German publisher/editor. Because his account has many signs of being authentic and therefore it should have been “left alone”, i.e. not been mixed with a lot of postwar thoughts. Of course the book could still have included postwar insights and comments. Actually, it could well have had some more postwar comments – from different historians of the Eastern Front. But the postwar insights and comments should have been in chapters separate from the wartime experiences. So, I object to how Neuber´s 1944 memories have been “developed”, because that process has not improved the book.

Still, especially once you get to the start of the long trek towards the new German lines, Marching From Defeat is often an amazing read. One gets the feeling that these are indeed the thoughts, experiences and conversations of German soldiers on the run. Surprisingly often they are helped by locals and some of the most moving scenes in the book are the encounters between the author´s group and villagers that often had no reason to help Germans - but still did so because they recognized the human beings behind the remains of German uniform.

I do not wish to spoil your reading experience but think the following quote from the author gives an idea of the challenges he encountered, without revealing too much: “Had I known about the ordeal that lay ahead of me, I would have given up all hope, but luckily I didn´t know and none of us knew because it was unimaginable.”

Neuber encountered countless setbacks of all kinds but also learnt repeatedly how a setback can turn out to be for the best. Sometimes it is almost beyond belief how he could carry on walking.

So, if you are into WWII escape & survival stories and/or have been intrigued by As Far As My Feet Will Carry Me, then Marching From Defeat should interest you. Hopefully some future book will examine Claus Neuber´s account in more detail, comparing it with wartime documents and also with similar fates.
created by Lars Gyllenhaal at 18:00