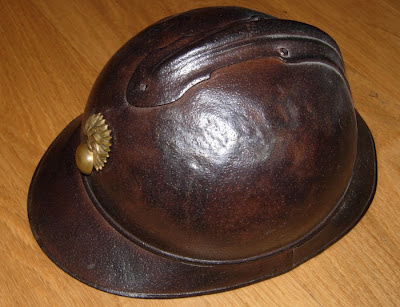 This French helmet from Norway, probably Narvik, was about to be melted down in Luleå, Sweden.

I visited the owner of this helmet during the weekend. It was about to be melted down in the steel plant in Luleå some year after the war but was saved by my friend.

It had no insignia when he saved it from the fire. The Foreign Legion badge he added after a trip to Paris. I wonder, might it as well originally have had the "RF" insignia? But I suppose there is no doubt it really belonged to a legionnaire if the chasseurs alpins wore no helmets while in Norway. Does someone out there know?
created by Lars Gyllenhaal at 10:30