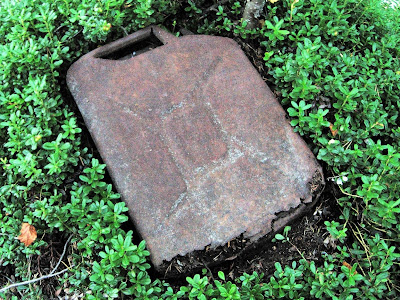 The 1st trace. I slightly moved this jerrycan to show the ground below.

Having a special interest in units that were in the area where Finland, Norway and Sweden converge, it was time for me to try to find remains in the field of the mysterious 9th German Mountain Division. I did, with the help of my Finnish friend and colleague Mika Kulju. This is my report about what we found.

In my native language, Swedish, we call the place where the borders of Sweden, Finland and Norway meet Treriksröset. That translates as Three Realms Cairn. What a wonderful ring that has, sounds like some place in a Tolkien book, right? There is also a more "official" name in English for the place, the Three-Country Cairn, but I prefer realms... Anyway, to get to that area by car I drove through the Swedish border town of Karesuando, that in 1944-45 housed several hundred Norwegian "police troops". There is a monument to their memory in front of Karesuando´s former police HQ, known as "The White House", today a local history museum. For more about the "police troops" see my book, Germans & Allies in Sweden.

In Karesuando I also noted that they still have that frontier shop that boasts "WE HAVE EVERYTHING, ALMOST".

I then drove past the enormous German fortified position of the 7th Mountain Division, called the Sturmbock-Stellung and since some years partially restored and including a small but interesting WWII museum mainly about the troops of the German 7th Mountain Division, who held the position between October 1944 and January 1945. Why did I not make a stop there? Well, I have visited it several times before and had some urgent business a bit closer to the Three Realms Cairn. The nature of that business I will not divulge here and now, as it constitutes part of a future article. But I can tell you it will be a surprising article, even for those with a particular interest in the area. I can also say that it was at the place quite close to the cairn that I rendezvoused with my friend Mika Kulju.

After having obtained the information and photos we had set out to get, we drove our cars homewards but made an important stop after about an hour. It was time to see if we during just a few hours might find any traces of the 9th Mountain Division in a place none of us had searched before, its late 1944 position between the border village of Palojoensuu and the town of Enontekiö. The position is known in some sources as the "Palojoensuu Position". Now, several readers may be wondering about the number, the NINTH division? In 1944 the unit was known as Divisional Group Kräutler (in German often just Divisionsgruppe K). On May 6, 1945 (that is what I call late in the war) there was an order re-designating it as the 9th Mountain Division. Well, by using that very late designation I may perhaps have sparked some interest...

What did we see then? First a jerrycan (see above), some parts of a lorry, some yet unidentified metal containers (suggestions about their use are most welcome): 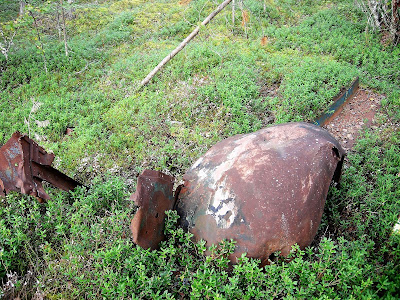 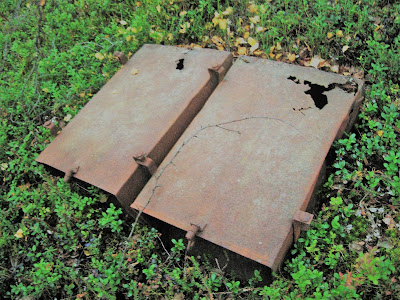 Then, hundreds of dugouts and trenches. Not many directly visible ones (remain) close to Palojoensuu, but once you start getting hills along the road towards Enontekiö you can start looking in tactically logical places, some within sight of the modern road. Here are two photos, click on them to see them in larger size: 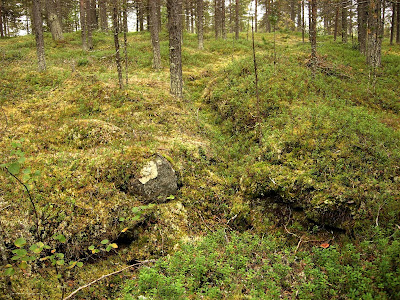 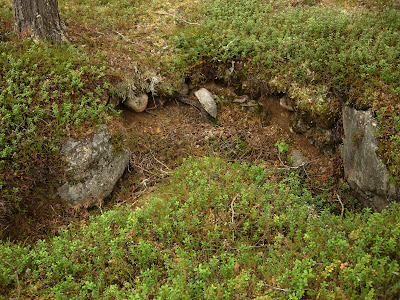 Thanks to the slow transformation of the Arctic landscape one can still make out many of the trenches and dugouts. Seeing them makes the WWII history of the area come alive, and the fact that there are no signs to point out anything (and until now no blog with tips about the traces) just makes them more worth seeing, in my opinion.

There is some rusty stuff still in the open, but less than in e.g. the Narvik mountains. Remember to refrain from touching anything that looks like ammunition/explosives, and let things look the way you found them. Take only photos.

Finally, driving back to my home, I was most pleasantly surprised to find a for me new SWISS coffee stop in Muonio, with what might be the best hot chocolate in the world. The place is also worth a stop for the pastries, pies and the amazing Lapland nature photographs. Yes, the place is run by a real Swiss couple. In my opinion the Swiss Cafe in Muonio is definitely worth a large detour. 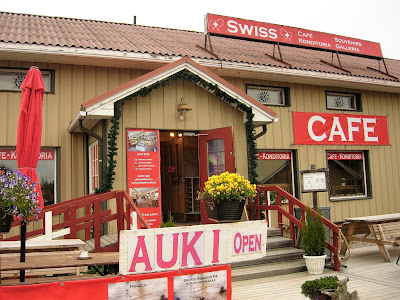 created by Lars Gyllenhaal at 23:38