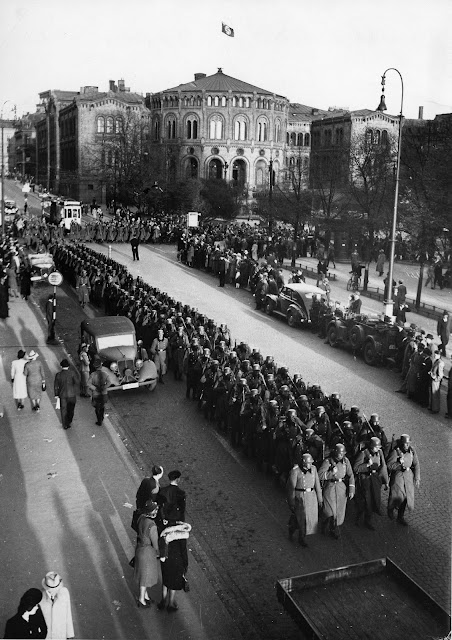 German troops march past the Norwegian parliament in 1940. PHOTO: Riksarkivet

In a few months the 80th anniversary of the German invasion of Norway in April 1940 will be highlighted not only here in Scandinavia. There are a number of books in English about the invasion, but the aftermath is not as well documented in English. However, a key source has recently become available: No Surrender.

There is something very inspiring with well-written personal accounts of occupation resistance and imprisonment. No Surrender is one of the strongest, not least because Hans Cappelen wrote it just some months after the war. In Norwegian his WWII memoir was published as Vi ga oss ikke already in 1945. Because of this and his postwar work for the public he became rather well known in Norway, in 1970 he was made a Knight, First Class of the Order of St. Olav.

No surrender contains plenty of exciting scenes due to high stakes and daring. In spite of the grim subject matter and proximity to the events, Hans Cappelen includes humour and portrays his captors in a credible manner. Several conversations that Hans Cappelen had with Germans quite surprised me.

This book is of particular importance not just because it covers the early resistance period, Hans Cappelen was a founding member of the resistance and when he was arrested in 1941 he was tortured and eventually deported to Germany as a "Nacht und Nebel" prisoner, destined to disappear in "Night and Fog" (the meaning of "Nacht und Nebel"). He thus got to know some of Nazi Germany’s most infamous camps, among them Natzweiler, Dachau and Buchenwald. In the spring of 1945 he was rescued by Count Folke Bernadotte’s "White Buses" and transported to Sweden.

RAF veteran and now also translator of No Surrender, J. Basil Cowlishaw, first met Hans Cappelen in the spring of 1949, when Cappelen approved his job application. They became friends and often met each other until Cappelen passed away in 1979. The result of the translator´s excellent understanding of the history and language in question is a wonderful translation - just a pity it has been released only this year. But better late than never.

I usually don´t write where reviewed books are available, but as there are yet very few places that have No Surrender, I will end this review by recommending the Amazon page.
created by Lars Gyllenhaal at 11:33