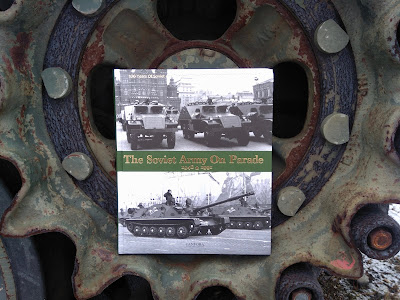 Now, which Soviet AFV in Sweden have I placed my review copy on?

Last year I blogged about British author James Kinnear´s original work of reference The Red Army On Parade 1917-1945. Does his new book, about the Soviet Army 1946-1991, deserve as much attention?

Already in the introduction for The Soviet Army On Parade 1946-1991 James Kinnear makes clear that we have entered a new era - he relates the history of the Soviet R-1 rocket, that began with the construction of no less than 29 V-2 rockets from components captured in Germany. Thus the post-1945 Soviet military parades, and this new book by Kinnear, encompass not only the history of Soviet AFVs, support & transport vehicles, it also constitutes a photographic encyclopedia of Soviet rockets and missiles from WWII to 1991. Due to the fact of the pioneering mechanization of the Soviet airborne forces it is also a book of great interest to airborne history buffs.

The first chapter kicks off with a grand image of a T-44 with markings that ought to inspire several modellers. Some more highlights are the images of the 2A3 "Kondensator" self-propelled nuclear gun; the (A)SU-85 airborne self-propelled gun and the ZiS-110B parade limousine. Rather surprisingly, there is even a 1947 image of amphibious Soviet DUKWs on parade in front of the Winter Palace in Leningrad. However, some Soviet military vehicles were just never paraded, such as the enigmatic tank destroyer SU-122-54. Only 77 of these beasts were built. They served in secrecy but some decommissioned examples were converted to armoured recovery vehicles and used on standby at Red Square parades in the 1980s. It was only this appearance that confirmed the existence of the tank destroyer. Mr. Kinnear provides images of both vehicles.

One of the best parts of the book is the final photo guide and glossary, the "heart" of the reference aspect of the book. But before that there is an amazing chapter on the many AFVs on "parade" during the attempted coup d´etat of August 1991.

Not only has the author located an impressive amount of great photographs, the captions show that the author really knows his stuff - he points out fine details, making the images even more interesting.

In general, this book, like Kinnear´s previous one, describes in amazing detail the vehicles and heavy weapons of an era. At the same time Kinnear provides a history of the main world events of the decades in question. This is largely a very good idea, that put the weapons and vehicles in context. I wrote "largely" because the pages about the author´s views regarding history after 1991 can be questioned both due to the years in the book´s title and the book type. Nevertheless, The Soviet Army On Parade 1946-1991 is a treasure trove for students of military history and especially for military vehicle buffs.

Thus The Soviet Army On Parade 1946-1991 is as valuable as The Red Army On Parade 1917-1945, and together the two volumes tell both the story of the world´s heaviest military parades and much about several of the most influential weapons and vehicles of the 20th century.
created by Lars Gyllenhaal at 18:17