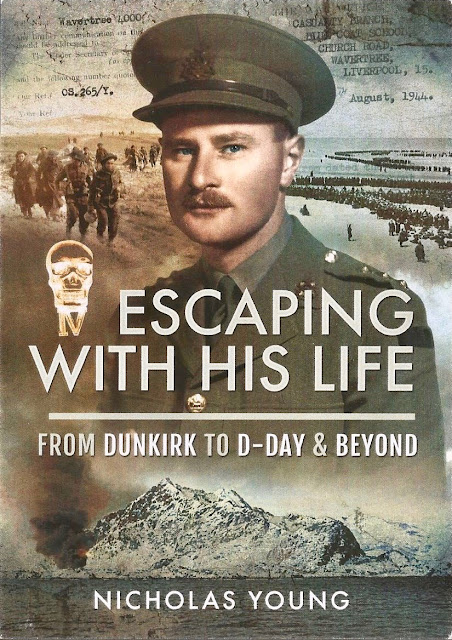 He fought in France, Norway, Tunisia, Italy and then from France to Germany.

Not that many of the first British commandos managed to fight all the way to Germany. Fewer still managed to experience danger in so many different places as did Leslie Young. His son, Sir Nicholas Young, has researched his wartime odyssey not least by going to Norway´s Lofoten Islands.

Having survived Dunkirk, Leslie Young was among the first to volunteer for a new special force, the Commandos. He managed to become one of the "specially trained troops of the hunter class" and the author lets us know what early wartime commando training was like. Being a Nordic in love with the awe-inspiring Lofoten Islands I then was amazed to read details of the famous Lofoten raid that I was unaware of. There is also some comic relief: a telephone exchange was captured and one of the British officers could not resist the temptation to send a telegram "To A. Hitler, Berlin". But I will not spoil your reading by here revealing the text of the telegram.

The Lofoten Islands of today are also in the book, as the author did research there in 2011, i.a. visiting one of the best military history museums in Norway, the Lofoten War Museum in Svolvaer. Back in 1941 it was the telegraph station and post office, and was the first building to be taken over by the Commandos, who landed just a few metres away. I can only agree with Sir Young: "The museum houses an extraordinary collection of uniforms, photos, flags, pieces of old weaponry [...]".

Having checked off Norway on his bucket list (I am just kidding about the list), Leslie Young then served on the battlefields of Tunisia - and of course, his son (the book´s author) went there too and could locate the very spot where his father made some fateful observations.

The book also has many amazing glimpses of Leslie Young´s life on the run in Italy (with villages in shocking conditions) and while fighting in Normandy against i.a. the 12th SS Panzer Division "Hitlerjugend". Strangely enough he then reaches the same area where he fought back in 1940. This last stage of the war in North West Europe is grim, but once in a while the advancing British units also get superb treatment from grateful locals. Reading about this and the author´s research travels inspires me and makes me recall similar feelings, how such travels forge deeper relationships.

What about the skull insignia on the cover? It is the badge of the unit that Major Leslie Young belonged to during the Lofoten raid, No. 4 Commando.

Finally some words about the book´s author - he began as a lawyer, then discovered his vocation as a charity worker and was knighted in 2000 for services to cancer care and in retirement remains a charity trustee and is chair of the Monte San Martino Trust, set up by former PoWs in Italy. This trust will receive proceeds from the sale of Escaping with his Life.
created by Lars Gyllenhaal at 18:14