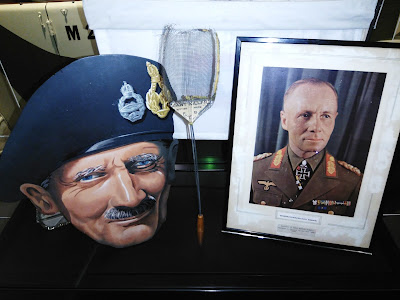 Seeing Field Marshal Montgomery´s "Giant Killer" was one highlight during 2019.

Several personal highlights in 2019 were connected to my first book release in London. But it was not in that city I found last year´s most impressive military history book.

Karl-Gunnar Norén and yours truly had a splendid time releasing The Long Range Desert Group: History & Legacy at the Swedish Embassy in London. Few experiences can beat meeting a cheerful LRDG & SAS veteran and the editor-in-chief of After the Battle. However, the day after was almost equally brilliant, as we then were given a surprise we had never even dreamt of: we were shown the ultimate collection of original Special Air Service (SAS) artifacts. We have still not fully recovered from this and I will return to our surprise visit in a special blog post. The above photograph is not from the SAS museum but from the desert section of the Imperial War Museum - that we visited later that day. The fly swatter actually bears the name "Giant Killer" and was used by Monty himself, in the desert - where also the Rommel portrait once was. More precisely, the portrait adorned Field Marshal Erwin Rommel´s own HQ until it was captured by the British Eighth Army.

Since those London days in May 2019 we have had the pleasure of reading about our LRDG book in After the Battle No. 186 and Classic Military Vehicle No. 219. By the way, my two English language articles about WWII in the Arctic are still in print, in After the Battle issues 99 and 136.

Summer in 2019 again meant history hiking with good friends in Narvik, and in October I had the privilege to break the news of the first film footage of a Junkers Ju 52 in pretty good shape at a depth of 75 metres, in a lake north of Narvik. Then three friends and yours truly located another Junkers aircraft, but this time a rather rare bomber, a Ju 86/B 3, and one not seen by anyone since it went down in 1943. This time the location was not in Norway but in Sweden and this is a discovery that is still not complete as we have yet to photograph and film the cockpit and tail section. So far we have basically recorded only the wings and brought up an aircraft tire and Junkers factory data plate, to clearly prove the aircraft identity. The bomber broke into sections upon crash landing on the lake ice, and the parts are very hard indeed to locate due to the nature of the lake. More info about the Ju 86/B 3 discovery will sooner or later appear on this blog.

Finally, in November, I came across the military history book that for me was the most original and important one last year, Red Assault: Soviet Airborne Forces 1939-1941 by Vladimir Kotelnikov. May the year 2020 provide less events that will go down in military history and more books as amazing as his.

Many thanks to all friends around the globe who made my three 2019 books possible.
created by Lars Gyllenhaal at 23:05