The Americans and Germans at Bastogne 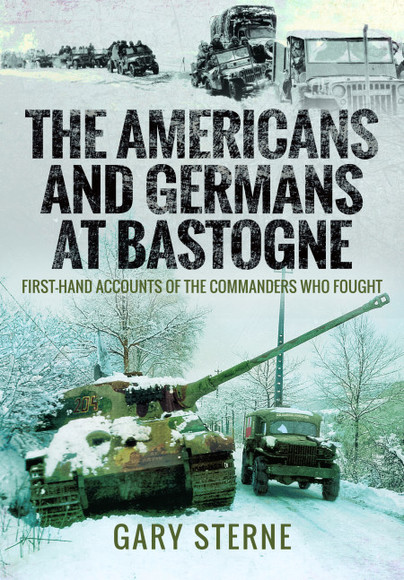 Can anything more and also of interest be said about the Battle of the Bulge? This new book by Gary Sterne shows that it is still possible. This is a book of particular interest to wargamers and others who want to get into details of the fighting in December 1944.

The British author Gary Sterne is rather famous for his Normandy research, not least concerning the Maisy Battery (check it out!). To produce The Americans and Germans at Bastogne he located the early postwar interviews with several German commanders who took part. He then matched them with US Army reports and selected a large number of wartime and postwar maps. The result is a source that should be very useful for those intending to visit the areas in question, and for wargamers. Also, anyone wishing to research the most involved German generals should have this book. Waffen-SS Oberstgruppenführer (Generaloberst) Josef “Sepp” Dietrich is of course among the quoted generals but there are more pages with Generalleutnant Fritz Bayerlein and Generalmajor Heinz Kokott and others.

Given that most featured German officers are generals the perspective is mostly on larger units, mainly the involved divisions. But from time to time you get to read about smaller units and even individual tanks. My impression of the Volksgrenadiers seems to be in need of revision as I understand from this book that their quality was very varied.

The clash in thick fog between US Army Staff Sergeant Michael Lesniak´s Sherman tank and a German Tiger is memorable. From the explosive account of the fighting around the village of Marvie I conclude that if I have the opportunity to again go there by car I would like to see what the place looks like today. Perhaps some buildings still show signs of the fighting? I have found scars from WWII before, many times.

If you are not into visiting battlefields I believe you will find that the most interesting part of The Americans and Germans at Bastogne is the chapter “German Commanders Assess the Reasons for Failure”. From it I note that “the failure to take St. Vith in time” is Generalfeldmarschall Gerd von Rundstedt´s number one reason. This was written down shortly after the war, without all the hindsight.

The book’s many maps should be of great interest, even though the image quality is not always the best. The photos are not that many but mostly good. This is a book that one gets for the text and maps, there are already plenty of photo books out there. If only this 291 page book would have had an index, and there are spelling mistakes (names). But hopefully there will be more editions, and then an index can be added.

created by Lars Gyllenhaal at 10:16