A crucial thing during my childhood was inheriting some things from Finnish Lapland. These souvenirs from the Winter War and also the Continuation War were to a large extent the spark that ignited my interest in military history.

The souvenirs came from a relative I never got to meet, my paternal grandfather´s brother Gunnar Gyllenhaal who was one of the Swedes at war for Finland during WWII. He died some years before I was born but his will was written in such a way that when his widow died I inherited his military belongings. In the Swedish Army he was finally a captain of the Svea Life Guards, one of the world's oldest regiments. 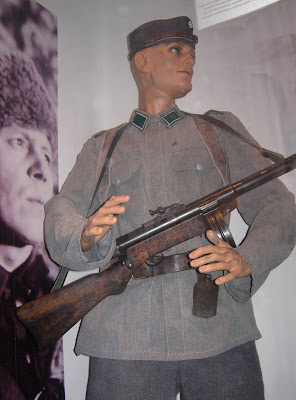 Finnish WWII infantryman in Salla´s new museum, armed with a "Suomi" submachine gun that had an international influence (i.a. it was bought by Sweden) and served Finland till the 1980s. The small bottle hanging from the belt was for mosquito repellent.

Thus it is with great interest I have followed the development of the first war museum in the Salla area in Finnish Lapland, which is where my great uncle was a company commander (heavy weapons company) in 1940. It opened some months ago but I have been unable to visit it until now. The full name is Salla´s Museum of War and Reconstruction.

It was moving to see the souvenirs I had earlier handed over to the museum, now on display, including several that I had received from Russian searchers active on the Salla/Kandalaksha Front. 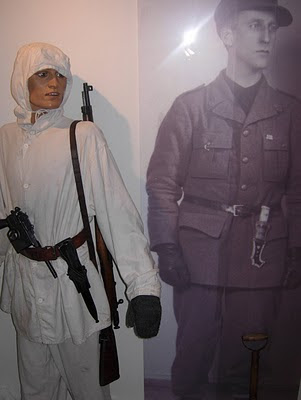 Among the largest photos in the museum is this studio portrait of Swedish volunteer Gösta Kihlberg. I received the photo of Kihlberg from his son, who lives just some hundred meters from our home. Note the northern knife which is probably something Kihlberg bought locally. 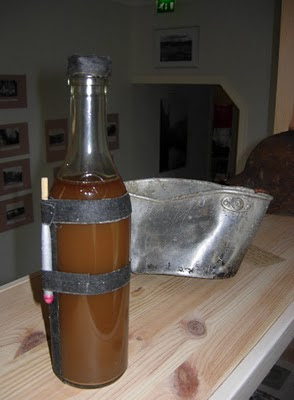 A reproduction of a Molotov cocktail. Behind it a Red Army eating bowl with many inscriptions in Russian. Judging from the words it is probable the owner was a Soviet prisoner of war from the Narva area. 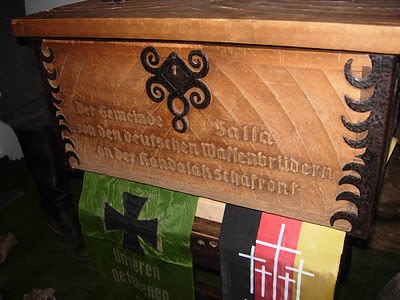 The German forces on the Salla/Kandalaksha Front presented this wooden chest, filled with money, to the municipality of Salla sometime before their retreat in the fall of 1944. The gift was for the postwar reconstruction of the area.

Do any readers know anything about the German chest pictured above? Was the money (partly) from the common soldiers? I gather it contained an impressive sum and is something the local community appreciates. Was this unique for the Salla area and exactly when was the chest handed over? The carved letters on it say "To the community of Salla from the German brothers in arms on the Kandalaksha Front".

There are many small items in the museum including an original Mannerheim Cross. However, I had no time to photograph them properly. But I can describe with words that there are half a dozen rooms with interesting and recent finds from the Arctic battlefields. Some personal soldier items are really moving, especially when you get to hear the story behind them. Many rusty remains are the result of years of searching with metal detectors and careful hands. The local search group has gone to great lengths to locate soldiers missing in action in the area. But many still remain unlocated, of all nationalities. Also some Finnish civilian casualties are still out there. 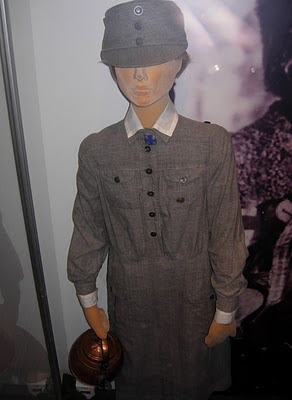 Uniform of a twelve-year-old Finnish "Lotta". The Lotta Svärd organisation was a Finnish voluntary auxiliary paramilitary organisation for women. Both Sweden and Norway copied the Finnish Lotta concept.

What moved me most during my museum visit was to hear how a civilan victim was found only after several years although it was known where the person had been killed. There was one single metallic giveaway, one bullet. Had that bullet not stopped inside the body, the person would probably never have been found. Many tragic episodes like this happened in Finnish Lapland due to the actions of Soviet partisans who had been encouraged by their instructors to "take revenge" on the Finnish people as much as possible.

Far from all about 5,000 Soviet partisans sent against Finland committed war crimes. But the totally around 200 Finnish civilians murdered by them have marked them in Finland.

By the way, did you know that Yuri Andropov, one of the last leaders of the Soviet Union, trained partisans that were sent to Finland? If he himself operated in Finland is unclear to me - quality sources (books) regarding this are welcome.

An enlarged photograph in the museum, illustrating the first period after the war, is also something that will always remain with me. Few places in Europe 1945-1950 had such harsh living conditions. 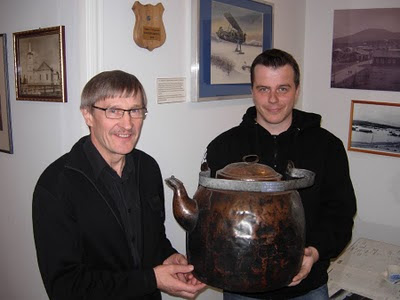 From the left, a supporter of the museum, local school headmaster Tapani Niskala together with the director of the Salla Museum of War and Reconstruction, Asko Viitanen. The XL coffee kettle is another Lotta item.

Although the museum to a large extent is about human tragedy it also speaks of some of the best qualities in humanity. Courage, perseverance and also cross-border cooperation are illustrated by many exhibits. Since many years Finnish and Russian historians and search groups are cooperating, e.g. exchanging remains of soldiers and honouring their memory regardless of the uniform they wore.

Regarding my own family I can add that my grandfather´s youngest brother, Carl Gustaf, also volunteered for Finland during the Winter War, but could not enter the Volunteer Corps. As for my paternal grandfather, Lars-Herman, I am not sure if he tried to volunteer for Finland but I do know from newly discovered wartime documents, found by my dad, that he clearly volunteered for Norway. But as he could not find a means of transport to the Norwegian forces in exile he was unable to serve Norway in that capacity. Thus he chose to never bring up this subject with his son or grandson (me).
created by Lars Gyllenhaal at 20:45